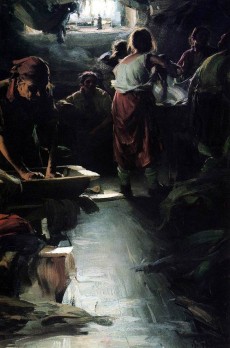 Abram Yefimovich Arkhipov made his name in the history of Russian art of the turn of the century as a sensitive, poetic artist who devoted all his talent to themes from peasant life. He was born into a poor peasant family in a remote vil­lage in Ryazan Gubernia. As a boy he first showed an interest in drawing at his local school. His parents gave him every possible encourage­ment, and in 1876, having painstakingly gath­ered together the necessary means, they sent him to study at the School of Art, Sculpture and Architecture in Moscow. At that time people such as Ryabushkin, Kasatkin and Nes­terov were among his fellow-students. The heart of the School, and the best-loved tea­cher was Vasily Perov, and other teachers included Makovsky, Polenov and Savrasov.

In 1883, after seven years at the School, Ar­khipov decided to continue his education at the Academy of Arts. The academic system of teaching disappointed him, however. Despite the fact that his study Man Falling from the Saddle and various other drawings were hailed as masterpieces and donated to the Academy’s permanent collection, Arkhipov left the Acade­my and returned to the MoscowSchool. After Perov’s death he studied under Polenov, whose art, permeated with light and a joyful perception of life, also exerted an influence on his work. 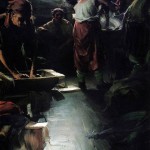 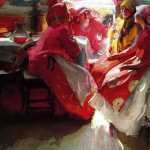 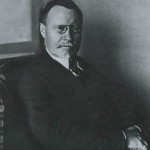 Photograph of A. Ye. Arkhipov

One of the most important works drawing to­gether the threads of Arkhipov’s student period was Friends or Visiting the Sick Woman (1885, TRETYAKOV GALLERY, MOSCOW), which depicts the artist’s mother. Her head sadly inclined, her eyes fixed on one point, a sick woman is sitting on a straw-filled bed in a miser­able, dark hut. Beside her, with the same dimmed, sorrowful look in her eyes, is her neighbour, come to pay the sick woman a visit. The postures of the two women, their tired, un­happy faces—everything tells of their humility, hopelessness and sadness. Only the sunlight, bursting in through the open door, is a reminder that happiness and beauty do exist somewhere. The painting contains both quiet melancholy and a feeling of deep compassion for human sorrow.

In 1888 Arkhipov set off on a trip along the Volga with his friends from the School. They stayed in villages, drawing a lot and painting many etudes. This was where he conceived the idea for the small painting On the Volga (1889, RUSSIAN  MUSEUM, SAINT PETERSBURG), in which for the first time he tried to achieve a successful fusion of genre scene and lyrical landscape.

Two years later Arkhipov was accepted as an active member of the Peredvizhniki Society. That same year, he completed one of his best known works, Along the River Oka (TRETYAKOV GALLERY, MOSCOW), which shows a barge floating along the river with tired peasants, deep in thought. Its meaning extends beyond the bare subject-matter, howe­ver. It is a story about people who are capable of enduring a great deal without losing their strength and steadfastness. It is an affirmation of the beauty of Russian nature, with its blue horizons, the spring flooding of its rivers, and its streams of sunlight. The muted colour-scheme is in harmony with the general mood of the painting. Arkhipov’s artistic style has changed. Compared to the careful detail of his early works, his style has become freer, more expan­sive and passionate.

‘The whole picture is painted in sunlight,’ wrote Stasov about this painting, ‘and this can be felt in every patch of light and shade, and in the overall wonderful impression; among the people on the barge, the four women—idle, tired, despondent, sitting in silence on their bun­dles—are portrayed with magnificent realism.’

In the 1890s Arkhipov painted mostly in the open air, portraying his heroes not in their small, stuffy studios and rooms but in the wide- open spaces of the Volga, in broad, sunlit squares, green meadows and roads. The painting The Ice Is Gone (1895, RyazanRegionalArtGallery) breathes the cheerfulness of spring. The river is freeing itself of ice, throwing off the fetters of winter. The inhabitants of the surrounding villages—old men, women and children—have come to observe the ceremonious awakening of Spring. Everything is bathed in the first rays of the sun. In Arkhipov’s works, people are closely bound up with nature. Their thoughts and feel­ings are refracted through the prism of the land­scape, which—like Russian folk tales and songs —has an epic breadth and sweep and is full of lyricism and gentle poetry.

Later, Arkhipov also painted highly dramatic works. The first of them—The Convoy (1893, TRETYAKOV GALLERY, MOSCOW)—deals with a new theme for the artist: that of the tragic fate of the peasants, ruined and impoverished, worn down by poverty and land­lessness. Silent and submissive, they patiently bear their cross.

In his painting Women Labourers at the Iron Foundry (1896, TRETYAKOV GALLERY, MOSCOW), Arkhipov dealt with one of the nineteenth century’s most poignant themes: the bitter fate of Russian women. The painting depicts the women resting from their exhausting labour, but the artist draws more at­tention to their milieu. The drifting black smoke, the sun-scorched earth and the low, wooden buildings help us to imagine the dread­ful conditions that these women worked in from dawn to dusk.

Arkhipov’s paintings seldom depict acute si­tuations or actions. The basic meaning is revealed through the milieu or surroundings in which the events take place. This was a charac­teristic device for artists at the end of the nine­teenth century. One of Arkhipov’s best and most interesting works is the painting The Wash- er-Women, of which there are two versions: (1899, RUSSIAN  MUSEUM, Saint Petersburg; and 1901, TRETYAKOV GALLERY, MOSCOW). While working on it, the artist searched tirelessly for a mod­el. He visited wash-houses, and spent hours watching the movements of the women at work. When the painting was almost finished, he no­ticed an old washer-woman sitting in a wash­house at the Smolensk market in Moscow. Her hunched back, her lowered head and her limply hanging arm—everything spoke of utter ex­haustion, deep spiritual apathy and hopeless­ness. Profoundly moved by all this, Arkhipov decided to start a new canvas, and in this way the second version came about. The artist ig­nored many unnecessary details, enlarging the figures by moving them closer to the spec­tator. He raised the picture to a universal level, epitomising the hopelessness and doom of these women’s existence.

The Washer-Women is an example of the artist’s new searchings in the realm of colour. In contrast to his other works, the painting is also, to a certain extent, accusatory, a trait which brings it in line with the best traditions of critical realism of the second half of the nineteenth cen­tury.

At this time, too, Arkhipov painted an unusu­al series of portraits of peasant women and girls from the Ryazan and Nizhny Novgorod regions. They are all dressed in bright national costume, with embroidered scarves and beads. Painted with broad, lively strokes, the paintings are marked by their decorativeness and buoyant colours, with rich reds and pinks predomi­nating.

Arkhipov also expended much time and ener­gy on his activities as a teacher. He started teaching in 1894 in the Moscow School of Art, Sculpture and Architecture, and carried on there after the Revolution. In 1924 he joined the Association of Artists of Revolutionary

Russia, and in 1927—to mark his fortieth year as an artist—he was among the first who were awarded the title of People’s Artist of the Rus­sian Republic.