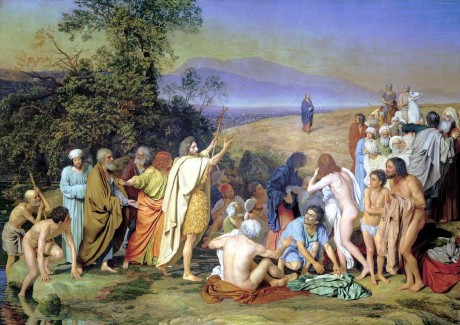 The artist, thinker and theorist Alexander Ivanov, in the words of the writer Nikolai Chernyshevsky, ‘belonged in his aspirations to that small elite of geniuses who are decidedly people of the future’.

Alexander Ivanov was born in St. Petersburg. His father Andrei Ivanov, was a professor of historical painting. In 1817 Alexander joined the Academy as an ‘external pupil’ and—unlike the regular pupils—continued to live at home. He had his first success with the picture Priam Begging Achilles for the Body of Hector (1824, TRETYAKOV GALLERY, MOSCOW). The subject is taken from Homer’s Iliad and the picture, which was painted when Ivanov was eighteen, won him a gold medal.

The artist completed his student years with a programme work on a Biblical theme: Joseph Interprets the Prisoners’ Dreams (1827, RUSSIAN  MUSEUM, SAINT PETERSBURG). Ivanov was awarded a first-class gold medal. However, the ideas which were clearly ex­pressed in the picture—of man’s defenceless­ness in the face of tyranny, and the flouting of the concepts of justice and lawfulness—caused dissatisfaction among the Academy’s ruling circles. The depiction on the dungeon wall of an Egyptian execution was seen as a direct allusion to the execution of five leaders of the De­cembrist uprising. True, the Academy officials could find no real proof of such an analogy and tried to hush up the whole episode, but still Ivanov had to produce a new diploma work in order to obtain the right to go to Italy. In the spring of 1830, having completed a small work entitled Bellerophon Sets Out on a Campaign against Chimaera, Ivanov finally was given an opportunity to travel to Italy at the expense of the Society for the Encouragement of Artists. 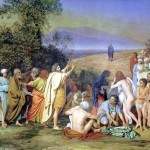 Christ’s Appearance to the People 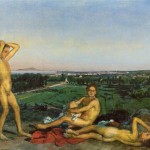 Boys at the Bay of Naples 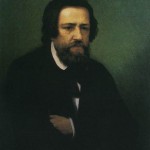 The start of his stay in Rome, however, was overshadowed by the news of his father’s retiral—dismissed from the Academy of Arts, on Nicholas I’s orders, after thirty-two years of service. ‘Born in the fetters of the monarchy,’ wrote Alexander Ivanov from Italy ‘I have of­ten seen my confreres tormented, I have seen the haughtiness of the aristocracy and the emptiness of those who occupy important posi­tions … I have always heard my relations com­plaining of the injustices of their superiors, whose power intimidates and enslaves them.’ But his personal sufferings did not dampen his belief in the power of art to transform man spiri­tually. In Italy he studied Classical and Renaissance art and particularly admired the Venetian frescos. In response to all this, he pro­duced one of his most poetic works—Apollo, Hyacinth and Cypress Making Music and Sing­ing (1831-34, TRETYAKOV GALLERY, MOSCOW). This painting was a hymn to lyricism, warm friendship and creative inspiration.

From the very start of his stay in Italy Ivanov was constantly on the look out for a theme that might totally engross him.

It was while he was still working on Apollo, Hyacinth and Cypress that he conceived the idea of a large-scale painting about the appearance of the Messiah. As a kind of ‘trial run’ for this work, he painted a two-figure composition on a theme from the Gospels: The Appearance of Christ to Mary Magdalene (1834-35, RUSSIAN  MUSEUM, SAINT PETERSBURG). The picture was successfully exhibited in Rome and then was sent to St. Petersburg Academy of Arts. Ivanov was consequently awarded the title of academician.

The artist was becoming more and more ab­sorbed by the idea of the moral regeneration of mankind. ‘The world abounds in evil. . . Art has forgotten to keep pace with social ideas,’ he wrote from Italy.

Over a period of twenty years Ivanov worked on his huge canvas Christ’s Appearance to the People (1837-57 TRETYAKOV GALLERY, MOSCOW). The artist’s notes show that he conceived the picture as a historical work. ‘In this painting I must portray people from different estates, people who are inconsolable as a result of the debauchery and oppression of secular governmental figures and as a result of atrocities committed by the Judaic kings themselves, ingratiating themselves with the Romans to ensure their place on the throne … I must show their timidity and fear of the Romans, and their feelings that show through, their desire for freedom and inde­pendence.’

The subject for the painting was taken from the Gospels. On the bank of the River Jordan, where the ceremony of baptism has just taken place, John the Baptist addresses the people with words of hope, pointing to the figure of Christ walking on the hillside. The excitement caused by John’s words has a great effect on the people. Behind him are the future apostles of Christ—the impetuous John, the grey-haired Andrew and the doubting Nathanael; on the other side are Pharisees, Romans and others. At John the Baptist’s feet are two seated figures—a patrician and his slave. On the tortured, fur­rowed face of the slave there is a semblance of a smile: ‘For the first time joy showed through the suffering to which he was accu­stomed,’ wrote Ivanov.

In that it showed the great and noble beauty of the human spirit, and in its penetration of hu­man suffering, the image of a slave was a true revelation in Russian and world painting.

The artist saw in this Biblical legend a chance to express his dream of freedom: . the day of humanity has dawned, the day of moral perfec­tion.’ And the moral perfection of people should turn the world which ‘abounded in evil’ into a world of universal harmony.

The artist’s dream of transforming society may have been utopian, given the acute social contradictions of the age, but it did adumbrate the ideas of progressive thinkers of the next gen­eration. Ilya Repin said of the painting: ‘Its idea is close to the heart of every Russian. It depicts the suppressed people, longing for freedom, crowding after a fervent preacher.’

The painting of this enormous canvas (40 m2) was preceded by extensive preparatory work. Ivanov made more than 600 preliminary etudes, sketches and drawings. These etudes proved to be a wonderful school in realism for the fol­lowing generation of artists, too.

The best of them is the etude of the head of John the Baptist (TRETYAKOV GALLERY, MOSCOW and RUSSIAN  MUSEUM, SAINT PETERSBURG), in which the broad, sweeping manner of painting, based on contrast of cold and warm tones, increases the emotional effectiveness of the image.

Ivanov’s searching and realistic aspirations manifested themselves most strongly in the pre­liminary landscape studies. He studied every detail of his picture and tested it against nature — from the stones, grass and colour of the soil to ‘the distant landscape, hidden in luxuriant olives and covered by the morning vapours of the earth’.

The more closely he looked at nature, the more riches he discovered in it. The single ob­ject exists in a whole, infinite space. The treat­ment of distance, the integrated depiction of nature as a multitude of linked parts, became the main aspect of Ivanov’s landscape painting. Pontos Marsh (RUSSIAN  MUSEUM, SAINT PETERSBURG), The Bay of Naples at Cas- tellammare (TRETYAKOV GALLERY, MOSCOW) and The Via Appia at Sunset (TRETYAKOV GALLERY, MOSCOW) are captivating because of their epic gran­deur and simple composition.

Working on his etudes in the open air, Ivanov set himself the complicated task of showing the interaction of sunlight and colour.

Particularly noteworthy are his famous land­scapes with ‘boys bathing’, in which he succeed­ed in conveying the link between his models and the landscape: Boys at the Bay of Naples (TRETYAKOV GALLERY, MOSCOW), Seven Boys in Coloured Clothing and Drapery (RUSSIAN  MUSEUM, SAINT PETERSBURG), Etude of Nude Boy (RUSSIAN  MUSEUM, SAINT PETERSBURG). These works are considered masterpieces of Russian and world landscape-painting.

The work on etudes required enormous con­centration, inventiveness and capacity for work. But Ivanov’s sponsorship by the Society for the Encouragement of Artists was over and both the Society and the Academy were persistently urging him to return home. ‘The thought of returning knocks the palette and brushes from my hands,’ he wrote. He knew only too well, what was happening in Nicholas I’s Russia from letters and meetings with friends. In Italy he ma­de friends with Gogol and Herzen and the scien­tist Sechenov.

The eventful 1840s, the revolutionary tre­mors in Italy, Ivanov’s own reflections on the social conditions of life and his friendship with people who were linked with a new stage in the development of Russian culture—all this brought about a volte-face in Ivanov’s world-outlook. In autumn 1857 he went to London to meet Alexander Herzen and to discuss with him the latest views on religious and cultural events in Europe and Russia. ‘We have gone far . . . in our thoughts, in the sense that faced with the lat­est decisions of literary scholarship the basic idea of my painting is almost completely lost. . . and I barely have the spirit to improve on it.’

Ivanov’s disillusion about the universal significance of the picture to which he had devoted his best years did not break him. The desire to ‘found a new station of art’ inspired him to further plans, in particular the creation of a monumental mural.

The mural was to have comprised a unified se­ries of 500 works. The artist managed to com­plete about half of the planned studies, done in gouache, water-colour, sepia or pencil. Ivanov wished to express, in poetic imagery, popular traditional tales which were refracted in various ways in the Biblical stories. By juxtaposing Biblical legends with the myths of the Greeks, Egyptians and Assyrians, he tried to divine their common basis. His comprehension and conception of religious subjects was quite novel at that time.

In essence, these Biblical studies restated the theme of the heroic personality and the peo­ple—the theme that runs through the whole of Ivanov’s work.

In the spring of 1858 Ivanov returned to St. Petersburg. His masterpiece, Christ’s Appear­ance to the People, and the numerous etudes for it, exhibited in the halls of the Academy of Arts, drew a cold reception. The artist was the butt of much bitter and unjust criticism. But Ivanov did find some worthy friends in his homeland—the art critic Vladimir Stasov and Nikolai Chernyshevsky, with whom he shared his plans, discussed the possibilities of starting a new Russian artistic school and of setting up educational institutions for young artists, and dreamed of travelling over Russia and painting new national historical canvases.

Alexander Ivanov’s life came to an abrupt end in July 1858, when he died of cholera. Alex­ander Herzen wrote an obituary for the journal Kolokol (The Bell); Ivan Kramskoi, too, wrote with profound sorrow about Ivanov, predicting the enormous effect that the moral power of his art would exert on future generations of artists.