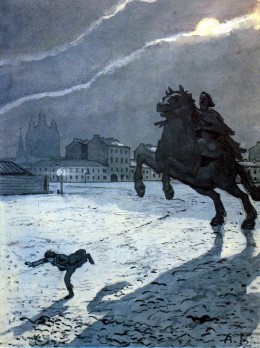 Alexander Benois was extremely versatile: he was a painter, a graphic, an art-critic, a lead­ing figure of the ‘World of Art’ society, a proli­fic writer on the work of Russian and foreign masters, and an outstanding scene-painter who worked in the theatres of Moscow, St. Peters­burg and in many cities in Europe and America. His life was one of hard work and extensive searches, marked both by failures and by glorious successes. As a talented artist, a populariser of art and organiser of many exhibitions, as a mu­seum worker and an active figure in the world of theatre and cinema, Benois made an enormous contribution to the history of twentieth-century Russian art.

He was born in St. Petersburg in an artistic family: his father, Nikolai Benois, was an acade­mician in the field of architecture. The artist spent his childhood and much of his life in St. Petersburg.

The atmosphere at home contributed to his ar­tistic development. From an early age he loved ‘old St. Petersburg’ and the suburbs of the capi­tal. He soon developed a love for the stage, too, which he retained all his life. He was endowed both with musical talent and with a rare visual memory. His artistic ‘memoirs’, which he drew much later, in old age, demonstrate the amazing power and permanence of his perception of life. 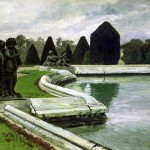 Lake in the Park at Versailles 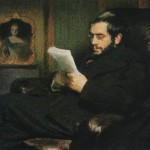 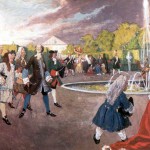 Peter the Great Walking in the Summer Gardens 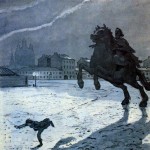 Frontispiece for A. S. Pushkin’s poem “The Bronze Horseman”

Benois began drawing at a private kindergar­ten, and all his life he remained totally absorbed by art. At the grammar-school, which he attended from 1885 to 1890, he made friends with V. Nuvel, D. Filosofov and K. Somov. Later, with Ser­gei Diaghilev, they would become the organ­isers of the ‘World of Art’ group and of the jour­nal of the same title, whose main aim was to pro­pagandise foreign and, especially, Russian art. The ‘World of Art’ uncovered a good many for­gotten or unnoticed names, drew people’s at­tention to applied art, architecture and folk crafts, and raised the standing of graphic art, de­signing and book-illustration. Alexander Be­nois was the heart of the ‘World of Art’ and a regular contributor to the journal. He never graduated from the Academy of Arts because he considered the only way to become an artist was by constant work. With his exceptional ca­pacity for work, he was able to complete a whole album of drawings, do some work in his studio on a painting, and visit the studios of a theatre — going into the details of scenery and cos­tumes, discussing the production and even going through the parts with the actors—all in a single day. On top of all that, he might prepare an ar­ticle for a journal or newspaper, and write sever­al letters—which invariably contained inter­esting reflections about art.

He still had time for his family, too. His son Nikolai, his daughters Yelena and Anna, his nephews and their little friends found ‘Uncle Shura’ both good fun and instructive, and they never sensed either irritability or tiredness in this busy but indefatigable man.

At the end of 1896, with some friends, Alex­ander Benois arrived in Paris for the first time and fell in love with it; here he painted his cele­brated ‘Versailles series’ which depicted the beautiful parks and walks of the ‘sun king’ (Louis XIV). While perfectly understanding events of the past, Benois was able to see things with the eyes of a man of the twentieth century. An example of this is the picture A Parade Un­der Paul /, which betrays not only a good know­ledge of the history, costumes, architecture and life of the period, but also a touch of humour— almost satire. ‘However much nonsense con­temporary artistic pen-pushers might talk about me and my “aestheticism”, my sympathies have always lain—and still do lie—with the simplest and truest depictions of reality,’ wrote Benois.

Benois valued the grandeur of the art of the past. This was extremely important in Russia at the beginning of this century, when factory chimneys and ugly but lucrative housing were beginning to threaten the classical skyline of the city. Benois was an outspoken advocate of pre­serving antique art treasures.

Among Benois’ best works are his illustra­tions for works of literature, especially those for Pushkin’s poem The Bronze Horseman, on which he spent over twenty years. Unique in their artistic merits, passion and power, these alone would be enough to earn Benois the reputation of the greatest artist of the early twentieth century.

Alexander Benois was also well-known for his work in the theatre. At first he worked with Konstantin Stanislavsky, and after the 1917 Revolution he collaborated with Maxim Gorky in organising the Leningrad Bolshoi Drama Theatre, at which he designed sets for several productions. His scenery for The Marriage of Fi­garo, staged in 1926, was Benois’ last work in the Soviet Union.

The artist spent the rest of his life in Paris, and also worked at the famous La Scala Opera House in Milan. But the memory of his mother­land—where he had participated in the realisation of the Soviet government’s first plans for the organisation of museums, where he had an important position in the State Hermitage Museum, Saint Petersburg and the RUSSIAN  MUSEUM and had done much to pre­serve ancient monuments—this memory remai­ned precious to him for the rest of his days.

Even before the Revolution, as one of the most active organisers (together with Sergei Diaghilev) of guest performances of the Russian ballet in Paris, Benois was concerned above all that these performances should bring world­wide renown to the Russian arts. All his later works were developments and variations of the ‘Russsian series’ begun back in 1907-10. Again and again he returned to the images he loved from Pushkin’s poetry: cf. Where Lonely Wa­ters, Struggling, Sought to Reach the Sea, The Flood in St. Petersburg, 1824. He treated the same subjects again at the end of his life, this time in painting. In his cinema work, too, Be­nois turned to Dostoyevsky and other Russian themes. His favourite composers were Tchai­kovsky, Borodin and Rimsky-Korsakov.