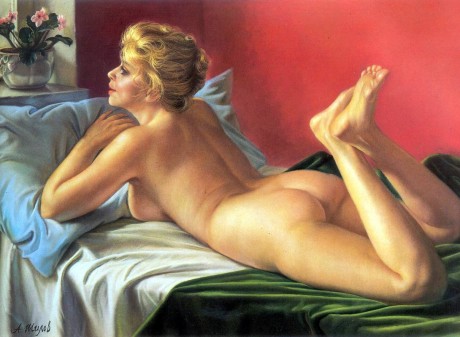 It so happened that within the space of two or three months this year, a one-man show of Alexander Shilov’s paintings was held in two capitals—Moscow and Paris. The public in both cities voiced the same opinion: “Bravo! Welcome to a painter who defends tradition!”) “Shilov’s works show, first of all, that the traditions of Russian art are being carried on”- such were the views expressed.

True, the most important thing about Shilov’s works is his loyalty to the classical school of painting. He says that since childhood he has been fascinated by the art of the old masters, whose traditions, he feels sure, live on, and, moreover, can inspire the painter of today again and again. A portrait painter in the first place, Shilov carefully records every minute detail, every wrinkle. He might be accused of being too “photographic” but a closer look at the faces and postures of his models will show that every portrait is a revelation of man and his emotional world as seen by a humanist painter. In his portraits the eyes are indeed mirrors of the soul, as the Russian saying goes. 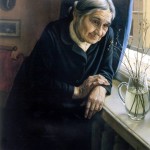 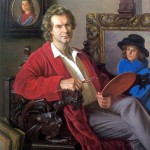 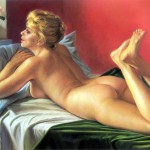 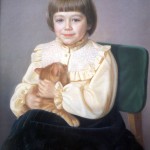 Violet with the cat

It would be hard to say whether Shilov has any special preferences when choosing his models. A child, a young girl and an old man are all of interest to him. His portraits include those of a worker, a farmer, a ballerina and a cosmonaut. As Shilov spends his summers in the country, he often paints country folk, who usually pose under a bright summer sun against the background of a village landscape. This is true about his “Master of the Earth”, one of Shilov’s finest portraits of a man who works on the land.

Another feature of Shilov’s painting is his interest in man’s social significance. No wonder critics say that Shilov’s works contain social generalisations. He is able to discern the important in the most ordinary things, and the general in the particular. His ideas аrе all the more clear because there are no special technical devices to distract the viewer. Shilov does not use painting techniques for their own sake; he thinks that supreme craftsmanship should be “invisible”.

It takes a professional to see how much hard work and skill have gone into such craftsmanship. At first Shilov attended classes at a painting studio and at 25 he entered the Surikov Arts Institute. He says he was influenced by his teachers A. Laktionov and B. Shcherbakov. But even after college, Shilov continued working on his technique. “An artist goes on learning all his life,” he says.