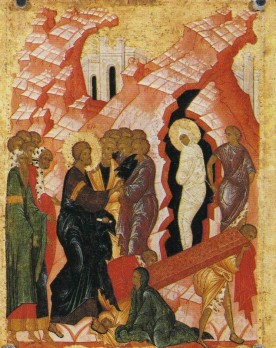 In one of the halls of the Tretyakov Gallery in Moscow there is a work which ranks among the greatest achievements of world art — the icon entitled The Holy Trinity.

In his depiction of the traditional Biblical subject—the appearance of the three angels to Sarah and Abraham—the artist expresses a profoundly human, philosophical idea. Painted more than five hundred years ago, The Holy Trinity still appeals to modern man because of the noble emotions, delicate poetry and inspired beauty of the figures.

The laconic composition concentrates one’s attention on the figures of the angels. Elegant and beautiful, they seem to be immersed in their inner worlds; the atmosphere is one of sadness, meekness and inner determination. The rounded lines of the figures lend the whole composition a certain equilibrium and solemnity. The light, pure, almost luminous colours—blues, silver-greens, golden-yellows, pinks and cherry-reds—evoke a tranquil atmosphere and seem to echo the colours of the countryside in which the artist lived and painted: the purity of clear skies, the gold of ripe corn and the green of meadows in spring.

Painted in an age of internecine strife and Tatar plunderings, The Holy Trinity was harmonious, serene and melodious, symbolising mankind’s dream of a perfect world in which harmony, love and friendship would reign.

Illumination from The Life of Sergii Radonezhsky manuscript

The creator of this brilliant work, the early Russian painter Andrei Rublyov, commanded enormous respect among his contemporaries, and later his name became surrounded by legend. The few facts to be found in writings of the period suggest that the great artist was born around 1370. As a youth he became a monk and spent many years in the Trinity-Saint Sergii Monastery. At that time monasteries were the centres of culture in Rus, and it was here that Rublyov received education and moral training, and also learned the art of icon-painting.

Rublyov painted his celebrated Trinity in memory of Sergii Radonezhsky, one of the inspiring minds behind the Battle of Kulikovo, who did much to help stop the civil war and unite the Russian princes in the struggle against the Tatars. The icon was kept in the Trinity Cathedral, built in 1411.

By this time Andrei Rublyov was already a celebrated master. In 1405 Theophanes the Greek, the monk Prokhor of Gorodets and he had decorated the Cathedral of the Annunciation in Moscow. Only two rows of the iconostasis in this cathedral have been preserved—the Deesis range and the festival row.

Rublyov painted seven of the festival icons — Annunciation, Baptism, Nativity of Christ, Candlemas, Transfiguration, Raising of Lazarus and Entry into Jerusalem. They are distinguished from the works of the other masters by their gentle and harmonious tone. The scenes from the Gospels are depicted with great intimacy, spirituality and human warmth. The colours are marked by tremendous emotionality and refined beauty, with the light, gentle hues of the scenery setting off the more intense and varied shades of the characters’ clothing.

One of the landmarks in Andrei Rublyov’s career was his decorative work in the Cathedral of the Assumption in Vladimir (1408) where he worked together with his friend and colleague Daniil Chorny. The extant frescos are a fragment of an enormous depiction of the Last Judgment, which occupied the west wall of the cathedral.

By analysing the stylistic peculiarities of the frescos, scholars have established which group of figures was painted by Rublyov; they are characterised, in particular, by great artistry, and by their musical, graceful lines. The herald angel is youthfully beautiful, and St. Peter is inspired and resolute as he beckons the pious into Heaven.

The interpretation and emotional tenor of the scene of the Last Judgment are unusual: the prevailing idea — and in this one clearly senses Rublyov’s own outlook — is not fear of terrible punishment but one of forgiveness. The frescos are an integral part of the interior of the cathedral: by emphasising the flatness of the wall, they enhance the impression of lightness in the architecture.

It is supposed that the icons of the Deesis range were designed by Rublyov and painted with the help of his pupils. The language of these works is exceptionally laconic and monumental, and the forms are treated in a generalised manner, with the stress on the silhouette and solemnity of movement. The colour range is reserved and expressive, based on the decorative effect of green combined with golden-yellow and red, and of blue with cherry-red. The saints are portrayed as sages, tranquil and noble. The most expressive images are those of Christ, John the Baptist and the Apostle Paul, which were presumably painted by Rublyov himself. Of the icons in the festival row only one—Ascension—is attributed to Rublyov.

It was evidently at this time that Rublyov painted an icon based loosely on the famous Byzantine icon Holy Virgin of Vladimir. The tender colours and the fragile image of the Virgin Mary, holding close her child, express maternal love, sadness and her foreboding of her son’s tragic destiny.

In 1918 three icons from a Deesis range were found in Zvenigorod—The Saviour, The Archangel Michael and The Apostle Paul, all thought to have been painted by Rublyov between 1410 and 1420.

The Zvenigorod Saviour is especially remarkable. The face of Christ is distinctive and spiritualised, with delicate, austere features. He is full of mental concentration and his gaze is direct and penetrating, expressing human kindness. There is little doubt that Rublyov embodied in this image the moral ideal of the Russian man of his time, in which peacefulness and meekness was combined with strength, courage and steadfastness of spirit.

The image of the Apostle Paul is suffused with humanity and calm wisdom, while that of the Archangel Michael is lyrical and full of profound poetic charm. The latter is akin to the angels of The Holy Trinity. At the time when The Holy Trinity was painted — round 1420—Rublyov was in his prime as an artist, and it is likely that another work attributed to him — Our Saviour in His Might (Tretyakov Gallery, Moscow) — also dates from then.

It is believed that Rublyov helped to decorate the Nativity Cathedral in the Sawino-Storozhevsky Monastery near Zvenigorod. The few fragments of the altar partitioning that have come down to us recall Rublyov’s style.

From 1424 to 1427, at the invitation of the Father Superior Nikon, Rublyov, Daniil Chorny and unknown craftsmen worked on the Trinity Cathedral in the Trinity-Saint Sergii Monastery in Zagorsk. The frescos of the cathedral have perished, and only three rows of the iconostasis, executed in different styles, remain.

The works which can be attributed to Rublyov with most certainty are Epiphany, The Archangel Michael and The Apostle Paul. These icons are distinguished by their profound content, monumental figures, beautiful silhouettes and harmonious colour spectrum, reminiscent of the colouring of the Trinity.

Rublyov spent the last years of his life at the Andronikov Monastery in Moscow, where he decorated the Cathedral of the Saviour. According to contemporaries, he also helped to build the cathedral. Unfortunately, none of the artist’s final work has been preserved.

As far as is known, Andrei Rublyov died on 29 January 1430 in the Andronikov Monastery. The work of this artist, who had many pupils and followers, was the greatest achievement of fifteenth-century Russian painting. It reflected the leading ideas of the period when a unified Russian state was forming. Rublyov’s images are profoundly humane. His elevated, poetic work was versatile, it was both tender and kind, manly and wise, and it reflected the inner crystal purity of man.

Andrei Rublyov’s art is the pride of the Russian people.