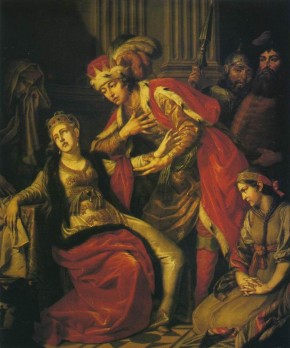 Anton Losenko was born in the Ukrainian town of Glukhovo, into the family of a peasant. At the age of seven, having a good voice and musical ear, he was taken into the court choir in St. Petersburg. In 1753 he and his friendsI. Sablukov and K. Golovachevsky renounced this career because their voices broke, and came under the wing of the artist Ivan Argunov.

In 1759 Argunov presented his young proteges to the tsar’s court with the recommendation: “…these choir-boys can draw and paint, make copies of portraits and historical paintings and paint from nature. They have shown extreme diligence, and honesty in their actions.” As proof of Losenko’s success, Argunov showed his picture Tobias and the Angel and his portrait of the court musician V. Stepanov, drawn from life. The three former choirboys then entered the Academy of Arts, which had opened in 1758, and worked as apprentices, helping the teachers. Losenko won the favour of one of the founders of the Academy, Count Shuvalov, whose portrait (RUSSIAN  MUSEUM, St.Petersburg) he painted in 1760. There followed portraits of the poet and dramatist Alexander Sumarokov (1760, RUSSIAN  MUSEUM, St.Petersburg) and of the talented actor Yakov Shumsky (1760, RUSSIAN  MUSEUM, St.Petersburg). This latter work is particularly noteworthy. The actor’s character and distinctive appearance are captured keenly, and the image is lent great life and immediacy by the device of illuminating his face and hand, making them stand out against the dark background. The golden-brown shades are harmonious and muted; the movement of the artist’s brush, especially where he brings out the texture of the face and hand, is clearly perceptible. 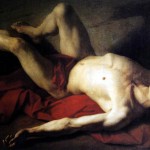 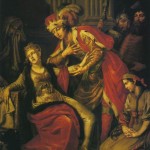 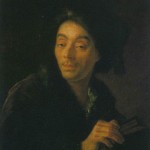 Portrait of the Actor Yakov Shumsky 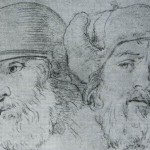 Count Shuvalov, first president of the RussianAcademy of Arts, was well aware of the need to create a national art school, with well-qualified Russian artists. This increased the president’s trust in young artists. In September 1760 the most capable students at the Academy—Losenko and the future well-known architect Vasily Bazhenov—were sent abroad to study.

In Paris Losenko studied under Jean Restout, a representative of late French academism. The first fruit of his studies was the many-figured canvas The Miraculous Catch of Fish (1762, RUSSIAN  MUSEUM, St.Petersburg).

The merits and demerits of the picture were evaluated by the Academy of Arts: ‘In everything we find signs of good reasoning and diligence . . . and talent which promises exceptional results if he is given a chance to practise.’ Having arrived at the Academy after his painting (which was dispatched to St. Petersburg ahead of him), Losenko was sent to Moscow, where he painted a well-known portrait of the ‘first Russian actor’—the founder of the national theatre, a brilliant performer and teacher of many other actors—Fyodor Volkov (1763, RUSSIAN  MUSEUM, St.Petersburg). Losenko not only achieved a likeness of Volkov (that it was indeed an excellent likeness is confirmed by the descriptions of the noted Russian enlightener Nikolai Novikov), but also created a work that was quite profound for its time, disclosing the vocation and spiritual richness of the actor, who, according to Novikov, was a man of “penetrating mind, thorough, sensible judgment and rare talent”.

In the summer of 1763 Losenko returned to Paris, where his drawings on themes from classical mythology were awarded gold medals. At this time the artist devoted much attention to the nude, and in 1764 he sent to St. Petersburg ‘one painting, a colour study from life and an etude’. The works meant here appear to be the painting Venus and Adonis or The Death of Adonis (State Art Museum of Byelorussia), the study The Apostle Andrew (RUSSIAN  MUSEUM, St.Petersburg) and the etude The Expulsion from the Temple (whereabouts unknown).

In 1765 Losenko dispatched to St. Petersburg the picture Abraham Sacrifices His Son Isaac (RUSSIAN  MUSEUM, St.Petersburg), which is more expressive in colour than The Miraculous Catch of Fish.

In December of the same year the artist moved to Rome, where he lived more than three years, studying the classics to perfect his drawing skills, making drawings from the paintings of Raphael in the Vatican and elsewhere, and doing exercises in colour. The result of this work was what Losenko called ‘life-size academy figures’—Abel (1769, KharkovArt Museum) and Cain (1768, RUSSIAN  MUSEUM, St.Petersburg). Devoid of any context (the names were evidently merely a pretext for the portrayal of magnificent models), these works were important landmarks in Losenko’s creative development. The tension in Cain’s foreshortened figure is marvellously conveyed, and set off by the gently falling folds of the drapery. One is struck by the precise organisation of the canvas space, by the harmony of the greenish hues and by the skilfully drawn body, especially the neck and shoulders. Cain is one of the artist’s clearest and most laconic works. The ‘Roman Cycle’ was completed by the picture Zeus and Thephia (1769, RUSSIAN  MUSEUM, St.Petersburg), commissioned by Count Shuvalov for Count Razumovsky and painted by Losenko unbeknown to the Academy.

In the spring of 1769 Losenko returned to Russia. His best works—Cain, Abel, Justice (based on Raphael)—were given the highest of praise.

In autumn 1769 Losenko commenced work on the painting Vladimir and Rogneda (RUSSIAN  MUSEUM, St.Petersburg). The subject was suggested by the Academy, leaving it up to the artist to supply the details. This picture was really the first work ever on a subject from Russian history, the background to it concerning the Novgorod prince Vladimir, who, having been refused by the Polotsk princess Rogneda, captured Polotsk, murdered the princess’s father and brothers and forcibly took her as his wife.

In his picture, Losenko captures the moment when Vladimir tells Rogneda of the atrocities committed in Polotsk and says that she must become his wife. But, in contrast to historical facts, Vladimir is portrayed full of repentance, which is conveyed in his gesture, his facial expression and eyes directed towards Rogneda. The artist moralises here, striving to prove that humanity has prevailed over tyranny.

The main attention is focussed, of course, on Vladimir and Rogneda, whose figures are highlighted. The artist underlines the protagonists’ feelings by their expressive gestures and poses, which contrast with the statuesque female figures and Vladimir’s cumbrous warriors.

ladimir and Rogneda started the national historical theme in Russian art—something which Mikhail Lomonosov and Alexander Sumarokov had called on the Academy to undertake. Moreover, it set a precedent for the interpretation of historical events from a moral position which corresponded to the most progressive views in Russian society, condemning tyranny and violence. The painting evoked a lively response from Losenko’s contemporaries, and the Council of the Academy, ‘seeing the artist’s outstanding talent’, elected him academician and bestowed upon him the title of professor.

As professor, and subsequently director, of the Academy, Losenko did much for its students. He prepared the first Russian art textbook: Exposition of the Proportions of Man, Based upon Reliable Study of the Proportions of Ancient Statues, . . . for the Use of Young People Learning the Art of Drawing. Losenko’s Exposition and drawings were used for a long time at the Academy and later at the Moscow School of Painting and Sculpture.

Losenko’s work as teacher and director sapped much of his energy. It is therefore significant that Etienne-Maurice Falconet interceded with Catherine II for Losenko to be given the opportunity to dedicate himself entirely to his art. “. . .Persecuted, exhausted, saddened and fatigued by a host of academic trifles which in any other Academy are no concern of a professor’s, Losenko is in no fit state to lift his brush. He will doubtless be ruined. He is the most talented of contemporary painters, but people are insensible to this fact and are sacrificing him. . . I am not alone in despairing at the fate of Losenko.”

Falconet’s letter evidently had no effect on Catherine, and the promised transfer of the artist from the Academy to ‘her gallery’ (the StateHermitageMuseum, Saint Petersburg) never took place.

Losenko’s last painting—Hector’s Farewell with Andromache (1773, Tretyakov Gallery, Moscow)—takes its subject from Homer’s Iliad and asserts public-spiritedness and patriotism as exemplified by the ancients. The picture also conformed to the Enlightenment spirit of the Academy charter, which stated that “The true and noble aim of art is to make virtue perceptible, to immortalise the glory of great people who deserve the gratitude of their country, and to fire the heart and mind to emulate”.

Anton Losenko died of dropsy on 4 December 1773. His funeral was attended by artists and actors, writers and poets. One of them, Vasily Maikov, dedicated the following lines to his friend, professor and director of the Petersburg Academy of Arts, and Russia’s first historical painter.

All things thy hand did fashion are alive

And shall endure so long as life goes on,

E’en though, Losenko, death has struck thee down,

E’en though our brief companionship is gone.