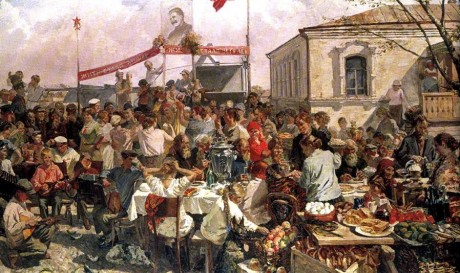 Arkady Plastov was born into a peasant family in 1893. He attended the Moscow school of painting, sculpture and architecture and in 1917 returned to his native village where he has lived and worked ever since.

His key theme is the life of the village. In 1966 he was awarded a Lenin prize for his series “men in the soviet countryside”.

Below the people’s artist Pavel Korin tells about the work of Arkady Plastov.

Whenever I think of Arkady Alexandrovich Plastov and his work, the first thing that I see in my mind’s eye are not his lovely paintings but a drawing of his showing Lev Tolstoi astride a horse wearing a simple peasant coat and cap. The rugged features and the grey beard of a peasant breathe the power of a magnificent intellect. Only real talent could so convincingly portray the nobility of the Russian soul and the greatness of this remarkable Russian man. 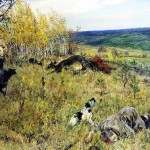 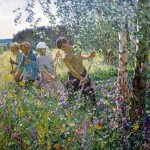 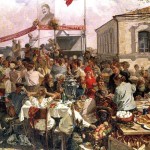 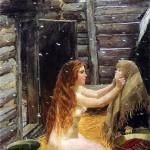 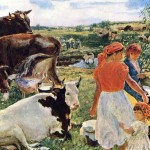 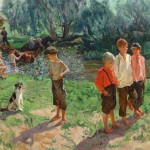 The creative life of Arkady Plastov gives us an example of purity and singleness of purpose. A peasant by birth, he paints the life of the country he knows and loves so well. He does not necessarily show his powerful and kind-hearted old peasants at work, he does not show the hardships they have to cope with. Yet in his pictures the life of the people rises in all its majesty and complexity. When we look at one of those vigorous old men eating his simple lunch in the picture “The Reaping”, see how reverently and assiduously he eats fust the way he works—we realise that only a man who has grown this bread in his field from tiny green shoots into the golden sweep of ripe corn could eat it with such great for their high artistic quality but also for their moral loftiness. Beside the old men we see their grandchildren who have learned in their tender years the worth of the peasant’s work and the peasant’s bread. The thoughtful air of these children gives us an insight into the Russian national character, into the mainspring of its beauty and strength. The girl who is carefully, so as not to spill a single drop, pouring milk out in the picture “Tractor-drivers at Supper”, her kerchief tied the same way as her mother and grandmother used to tie theirs, will one day grow into that long-braided teenager watching life’s eternal wonder, a crystal clear stream lit up by the sun (“Spring”) and then into the stern beauty in a blue kerchief (“Girl with a Bicycle”).

Plastov’s village epic embraces a great many heroes and lives which, taken together, produce a mosaic picture, as it were, of Russia.

Plastov’s later work bespeak a mastery that years have not dulled. Bold colour scheme, precision and naturalness of composition, poetic simplicity of theme—these are the characteristics of this wonderful painter.

I would like to mention two more very significant pictures by Plastov. In the picture “A Nazi Has Flown Here” (1942) a shepherd boy is shown lying face down blood gushing from his head. That death of one child at the time when children died by the thousand demonstrated what terrible tragedy had befallen the people, how inhuman and unnatural is war. One of Plastov’s recent canvases shows another shepherd boy. This time we see a handsome self-assured boy with a big whip on his shoulder, wearing a fur cap worn by grown herdsmen when pasturing horses at night. He is looking up into the sky with delight—perhaps it is at a plane, the wonder of technology, that today carries no threat of death, or at a wedge of cranes. The boy stands in the middle of a huge field stretching to the horizon. You can see a herd grazing calmly in the background and clouds floating high in the sky. The picture is suffused with freedom and faith in the future. Once again Plastov has given a completely new interpretation of the eternal village theme, reflecting in his picture the spirit of the time, the time of hopes and achievements, the time of peace.