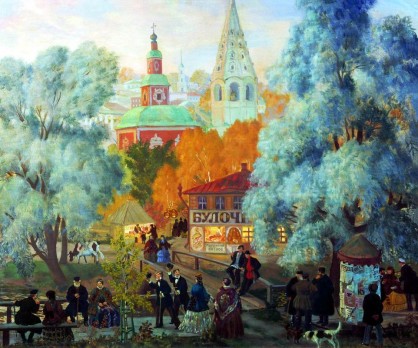 His works combine seemingly disharmonious elements. They reveal a rapturous perception of feminine beauty, and at the same time a touch of kind irony towards his model; open acceptance of modern times along with nostalgia for the “good old days”; absolute realism in details and a very free treatment of compositional elements.

Painter, graphic artist and stage designer, Boris Kustodiev was a pupil of the classical Russian painter Ilya Repin. A native of Astrakhan, that “self-willed haven of fishermen”, Kustodiev was, and is remembered as, a master of the Russian folk type. He introduces theatrical effects and a colourful succulence into his gay, even jaunty compositions. His paintings of noisy markets, carnivals and fair booths sometimes approach the cheap popular print. But only approach it. The artist’s originality and independence are unquestionable. Kustodiev even theatralised the portrait to some extend He just loved to depict action and movement, and the background of most of his portraits seems in continuous motion. 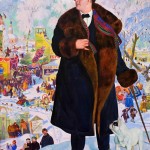 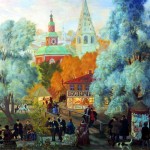 Kustodiev not only espoused the ideas of the October socialist evolution, he put his talent and knowledge of the depths of the people’s soul at the service of the new socialist order. The young SovietRepublic was still surrounded by an iron ring of enemies of the revolution when the eminent, widely recognised master undertook the festive decoration of the streets of Petrograd on the occasion of the first anniversary of the victorious revolution. This was in the cold and famine-ridden months of 1918, when many intellectuals had yet to determine their position in the revolutionary environment.

Recently the Soviet people celebrated the hundredth anniversary of Boris Kustodiev’s birth. Quite a few exhibitions, lectures and discussions on the great master’s work were organised. Looking at Kustodiev’s paintings, posters and scenery sketches, gay as Russian ditties and lively as Russian dances, one gets the feeling that he is still at work among us today and finds it hard to believe that he has been dead for 60 years now.

He loved people, and people reciprocate the feeling still today.