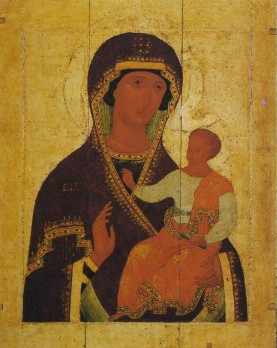 Dionysius was well-known even in his youth and worked all over Muscovy. Other than this, little is known about his life.

Between 1467 and 1477 he and the painter Mitrofan decorated the Church of the Nativity of the Virgin Mary in the St. Pafnuty Monastery, and then he went to Moscow, where he painted the iconostasis for the Kremlin Church of the Holy Virgin (as the Cathedral of the Dormition was then known), built by the distinguished Italian architect Fioravanti. Later, Dionysius’ biography was linked with the Monastery of St. Joseph in Volokolamsk, where he led the team of icon-painters working on the icons for the Church of the Dormition.

Only one of the master’s early icons—Holy Virgin (Hodegitria) from the Monastery of the Ascension (1482, Tretyakov Gallery) — has been preserved, but it does not give a full idea of the character of Dionysius’ work as it is a reproduction of a burnt Greek original. The image of the Virgin here is solemn and coldly restrained. There are two more icons by Dionysius in the Tretyakov Gallery — Our Saviour in His Might and Crucifixion (1500), in which the sources of Dionysius’ art can be felt, namely, the traditions of Andrei Rublyov, adapted by the later master to the aesthetic ideals of his time. In Crucifixion, the figures of the saints are elegantly outlined and rather elongated—which, together with the bright colours, creates an impression of great lightness; the tragic scene acquires a calm, serene undertone. Crucifixion is similar in style to the frescos in the Church of the Nativity of the Holy Virgin in the Ferapont Monastery, which are among the most remarkable art treasures of Ancient Rus and Dionysius’ greatest achievement. 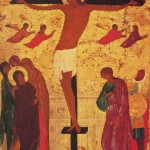 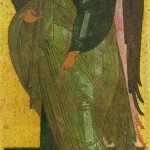 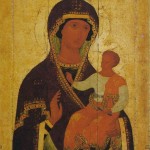 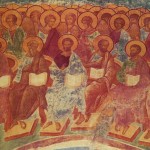 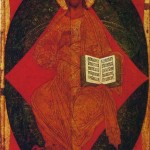 The monastery was founded in the fourteenth century in Northern Rus by the monk Ferapont, originally of Moscow. Fortunately, the frescos have come down to us in good condition. Moreover, an ancient inscription in the church reveals that it was decorated, between the years of 1500 and 1502, by Dionysius and his sons Feodosy and Vladimir.

The frescos in the Ferapont Monastery are all united by the theme of the glorification of the Holy Virgin, her grandeur and her mercy, and the overall conception unquestionably came from Dionysius himself. The murals cover not only the interior but also the facade, which portrays the main subject—the nativity of the Holy Virgin. The composition here unites various episodes in a smooth, calm narrative rhythm. Anna lies on a couch, surrounded by graceful servants; alongside preparations are being made to bathe the infant, while the little Mary lies in a cradle; Anna and Joachim tenderly caress their daughter. There is an intimate, lyrical element in these scenes, combined with a sense of majesty and elevation.

The theme is developed inside the church, where the frescos are arranged in four rows, entirely covering the walls and vaults. Various scenes are elaborated: The Annunciation, in which Mary anxiously listens to the news brought to her by the Archangel Gabriel; The Intercession of the Mother of God, in which, rising majestically against the background of the church. Mary shades mankind with her veil, a symbol of protection against misfortune. In the scene of The Last Judgment the Holy Virgin pleads with the Judge on behalf of mankind. A special place is occupied by illustrations of psalms in glorification of Mary.

Dionysius liked complex, many-figured scenes with the figures depicted in such a way as to appear especially light and elegant, with natural movements, and even his servant-girls and men dicants have a regal bearing. The artist stressed the dignity of man and the idea of the unification of the human race; he aspired to convey various experiences, but never expressed strong passions—the emotions of his characters are always restrained and noble. The construction of the scenes, though complex, is strictly balanced and polished, and the masterly drawing, with its smooth lines, gives the murals a musical character. All the scenes have a clear-cut rhythm and are like polyphonous melodies united by a single majestic, tender theme.

The greatest emotional effect, however, derives from the colouring. Dionysius was not fond of bright colours; he toned down his palette a little, making the colours lighter and thereby imparting to them greater delicacy and softness and a kind of shining purity. Pale-green, golden-yellow, pinkish, white, cherry and silver-grey hues intertwine harmoniously, and through them all runs the ‘leitmotif’ of azure blue. The depiction of the human figures and landscapes, which are entirely subordinated to the flatness of the walls, and the transparency of the colours help to underline the lightness of the architectural forms, seemingly pushing the walls of the church apart and making it more spacious and bright, while the severe northern countryside which surrounds the church enhances the joyful, festive impression of the painting.

Apart from the mural decorations, Dionysius and his sons also painted an iconostasis for the church. The icons are now in the museum of the town of Belozersk, the Tretyakov Gallery and the RUSSIANMUSEUM in St.Ptersburg. Like the frescos, the icons are noted for their refinement and beauty; particularly beautiful is Holy Virgin (Hodegitria) — majestic and womanly, she proudly bears the divine infant into the world.

Dionysius’ work for the Ferapont Monastery marked the culmination of his career. It is supposed that the great painter died some time between 1502 and 1508, since in 1508 the painters’ workshop was headed by his son.

Dionysius’ painting — a bright, exultant song in colours, glorifying goodness and beauty — was an expression of the tremendous flourishing of culture and art in the period when the young Russian state was asserting its might.