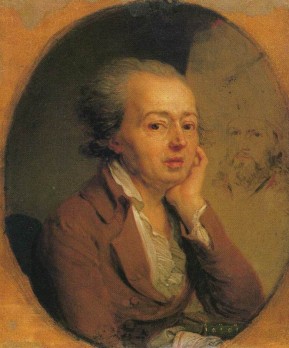 Dmitry Levitsky was one of the most important and versatile artists of the eighteenth century. His brilliant, refined portraits most fully reflected the philosophical and aesthetic conceptions of the second half of the century, and the age’s belief in the power of a reason and the integrity and nobility of human nature.

Levitsky came of old Ukrainian stock and was born in Kiev. His father Grigory Levitsky was a hereditary priest who did amateur painting and etching, and it was he who taught his son the first skills of painting. An important role in the boy’s development was the arrival in Kiev in 1752 of the well-known St. Petersburg artist A. Antropov to decorate the St. Andrew Cathedral. The Levitskys, father and son, got to know Antropov, and it was possible that they took part in the decoration of the cathedral, since Antropov was empowered to take on local masters as assistants.

In 1758 young Levitsky went to St. Petersburg and became Antropov’s pupil. He lived in his house and for several years worked together with him. In 1762 he went with Antropov to Moscow, where he painted the Triumphal Gates erected to mark the coronation of Catherine II. Here Levitsky worked with the leading artists of the day, and there can be no doubt that the young artist benefited greatly by such contact. A year later Levitsky went his own way. Having inherited from Antropov not only painting skills but also disinterestedness, honesty and diligence, he began his independent creative career. 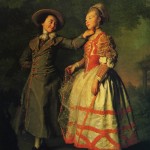 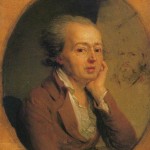 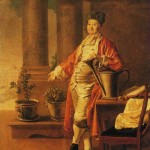 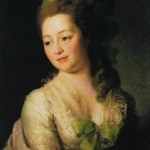 Levitsky’s name first became known at an exhibition in the Academy of Arts in 1770, at which he exhibited six masterly portraits. One of the most interesting of these works was his portrait of A. Kokorinov (RUSSIAN  MUSEUM, St.Petersburg), the designer of the building which housed the Academy of Arts, and its first director. The portrait belonged to the typical eighteenth-century genre of the full-dress portrait, a genre which required splendour and solemnity. In this type of portrait, the apparel, gestures and attitude of the model, the attributes surrounding him, and the composition of the painting, with the figure in the central position, were supposed to underline the subject’s high social standing. All this is present in the portrait of Kokorinov, in which a certain tranquility and serenity can also be felt, due to the restrained colour com­binations. The architect’s thoughtful face is painted lovingly with the stress on the human dignity and nobility of his character.

Levitsky received the title of academician, and from 1771 for seventeen years he took a class in portrait painting at the Academy of Arts.

In the seventies and eighties Levitsky was at the peak of his talent and fame, and constantly received commissions from the tsarist Court. In 1773 he painted P. Demidov (Tretyakov Gallery, Moscow). The unusualness of this portrait was to some extent due to the originality of the subject’s personality: Demidov was renowned for his eccentricities but at the same time he was a highly educated man, who donated enormous sums of money to the cause of enlightenment. This work is distinguished by its combination of showiness in the positioning of the figure, with the simplicity of Demidov’s appearance—he is depicted in the ceremonial attitude against the background of a traditional colonnade. He is surrounded by everyday objects, such as pots of flowers and a watering-can, which are reminders of Demidov’s interest in gardening. His informal dress strengthens the intimate flavour of the work.

Levitsky’s search for more life and naturalness in the portrayal of people found expression in a series of portraits of girls from the Smolny Institute, founded by Catherine II with the aim of bringing up ‘a new kind of woman’—well-bred and educated. Seven portraits commissioned by the empress were completed between 1773 and 1777.

In his portraits of the Smolny girls, the artist introduced the element of ‘plot’, showing the models in action so as best to display their character traits. The girls are portrayed performing concert numbers. Ye. Nelidova, who was well-known for her artistic talent, dances and sings couplets; in her smile, her glance and her movements there is animation and cheerful coquetry. N. Borshchova dances briskly and spiritedly, while the movements of A. Levshina, a serious, dreamy girl, are smooth and slow. G. Alimova plays harp, turning to the spectator with a polite, well-mannered smile. Charming, and with a delicate, intelligent face, Ye. Molchanova recites poetry.

This series includes two double portraits—F. Rzhevskaya and N. Davydova, and Ye. Khrushchova and Ye. Khovanskaya. The latter is particularly expressive in its characterisation. The girls are acting out a pastoral scene: Khrushchova is playing a shepherd-boy, Khovanskaya a shepherdess. Levitsky bases the portraits on the juxtaposition of their individual qualities: Khovanskaya is shy, timid and a little constrained in her movements; Khrushchova is more forward, with a pert smile and a playful gesture.

Though originally he had no overall plan for the series of portraits of the Smolny girls, Levitsky succeeded in producing a unified suit, whose common theme was the charm and beauty of youth. The portraits are linked by their unity of formal devices, by the rhythm of movements, by their common constructions, and by the use of conventional theatrical or landscape background, with the human subject predominating. They are all characterised by decorative colouring and subtle use of refined tones, yet each portrait has its own distinctive colour key.

These works display Levitsky’s talent for creating a decorative ensemble, intended to adorn a palace hall, and his understanding of the portrait as a large-scale compositional picture. (The whole series is now displayed in the RUSSIAN  MUSEUM, St.Petersburg)

Levitsky’s mastery manifested itself in many of his later canvases, especially in his Portrait of Catherine II the Legislatress, which he was commissioned to paint by the Chancellor A. Bezborodko (1783, RUSSIAN  MUSEUM, St.Petersburg).

The portrait of Catherine II is essentially a historical painting, in which the content is put across by a system of allegories. Such use of imagery was characteristic of the classical style, which was established at that time in the Academy of Arts. A description of the portrait by Levitsky himself has been preserved, in which he says that Catherine is depicted in the temple of the goddess of Justice; by burning poppies at the altar she ‘sacrifices her own precious peace for the peace of all’; the order of St. Vladimir underlines her services to her country; the open sea visible in the distance, the Russian flag and Mercury’s warder on a shield, all represent protected trade.

The moulding of the artist’s views was greatly influenced by his close contact with a circle of progressive thinkers and writers (V. Kapnist, G. Derzhavin, A. Olenin and others), one of the more eminent of whom was Levitsky’s friend N. Lvov. A man of exceptional education and wide-ranging abilities, Lvov constantly spoke in favour of national art and its important social role. It was he who suggested to Levitsky how he should portray Catherine II. It is interesting that in his ode The Apparition of the Tartar Prince, depicting Catherine, the poet Derzhavin gives poetic version of Levitsky’s portrait:

From the clouds she descended

And appeared, a priestess

Or a goddess, before me;

In silver did flow,

Her bosom was aureate

Among Levitsky’s best works is his portrait of the famous French philosopher Denis Diderot (1773, Geneva Public Library), who visited Russia on the invitation of Catherine II. Diderot is portrayed in a gown, without a wig; his old man’s face is drawn with great care, and his eyes reflect his clear mind and concentration. Diderot appears to have liked the portrait, as he bequeathed it to his sister.

Levitsky’s female portraits are extremely beautiful, and each has its own distinctive range of colour. The niece of the Polish king, the society beauty Ursula Mniczeck, for example, is painted in subtle shades of gold and light blue (1782, RUSSIAN  MUSEUM, St.Petersburg); in the portrait of the quick-witted Italian adventuress and singer Anna Devia Bernucci (1782, Tretyakov Gallery, Moscow) the colour relationships are simpler, while her complicated toilet introduces a rather ‘garish’ element. The most attractive of the female images created by Levitsky is that of M. Diakova (1778, Tretyakov Gallery, Moscow), which is tender, light and full of charm and womanliness. The poetic qualities of this portrait liken Levitsky to that other great painter of the eighteenth century, Fyodor Rokotov.

In 1787 Levitsky gave up his teaching post at the Academy. Towards the end of the century his position changed dramatically and he was no longer considered the leading artist of his times. The old master experienced great material hardships. He lived in solitude, began to get involved in freemasonry and became more and more religiously minded.

In 1807, thanks to the efforts of the conference secretary of the Academy of Arts A. Labzin, Levitsky returned to the Academy as a member of a Council. But soon he was overtaken by great misfortune: he began to lose his sight. His last work was painted in 1812.

Dmitry Levitsky died in 1822 in St. Petersburg and is buried in the Smolensk Cemetery.