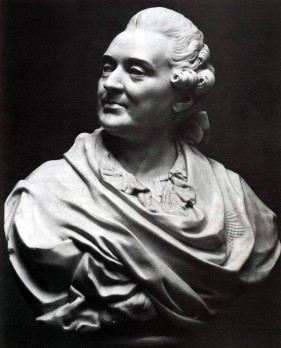 The work of Fedot Shubin, like that of all the greatest eighteenth century masters, does not belong only to its own age. Covering a broad range of genres—portrait, monumental and decorative sculpture, bas-relief—it achieves such psychological depth and plastic perfection, especially in his portraits, that Shubin can be considered one of the great masters of world art.

He was born in a fishing village in the Arkhangelsk gubernia in the north of Russia. His father, Ivan Shubnoi, a free peasant, was literate and was Mikhail Lomonosov’s first teacher. The Shubnoi family worked as fishermen, ploughmen, and carved bone and mother-of-pearl.

In the winter of 1759, after his father’s death, Fedot Shubnoi followed Lomonosov’s example and joined a group of merchants travelling to the capital with a transportation offish. For two years the young man carved snuff-boxes, fans, combs and other knick-knacks which sold well in St. Petersburg.

In November 1761, under the patronage of Mikhail Lomonosov and the first trustee of the Academy of Arts, Count Shuvalov, he was enrolled as a student under the name Fedot Shubin. 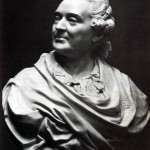 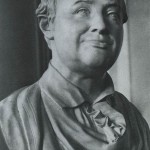 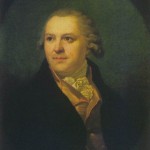 Shubin studied arduously and was regularly given awards and praise. In June 1766 his bas-relief The Killing of Askold and Dir earned him a Grand Gold Medal and ‘Certificate with Sword’—which meant that he attained the first rank of officer and entered the nobility.

Shubin’s academy works, including genre statuettes, have not been preserved. In recognition of his “good success and honest, laudable behaviour” he was sent in May 1767 with a group of state-supported artists to study in Paris. Here he came under the guardianship of the Russian ambassador Dmitry Golitsyn, an enlightened, pro­gressive man and a great connoisseur and patron of art. On the advice of Diderot, who was a friend of Golitsyn’s, Shubin was assigned to study under the sculptor Jean-Baptiste Pigalle, who was famous both for his allegorical and mythological compositions and for his realistic sculptured portraits. Under his guidance, Shubin copied the works of contemporary French sculptors and antique statues and modelled bas-reliefs from pictures by Raphael and Poussin. But Pigalle made his pupil work most of all from nature. In the evenings Shubin attended a class in the art of modelling from nature at the Paris Academy of Arts, and he frequently visited the Royal Library and the studios of well-known sculptors. “. . .There is no interesting or worthwhile place in Paris”, he wrote to St. Petersburg, “which we miss, and we spare no effort to broaden our minds.”

After three years in Paris, at the end of 1770, Shubin had the permission of the Academy to go to Rome. The next year he painted portraits of Count Shuvalov (1771, Tretyakov Gallery) and his nephew Fyodor Golitsyn (1771, Tretyakov Gallery). Also successful was his marble bust of Catherine II, despite the fact she did not sit for him. It was at this time that the Empress’s favourites, Alexei and Fyodor Orlov, commissioned Shubin to paint their portraits—works which are marked by their restraint and by the realistic tendencies in the interpretation of the models.

In 1772, while travelling with the Demidov brothers—the first Russian factory-owners—in Italy, Shubin stopped at Bologna, where he completed a series of works for which he was awarded the title of honorary member of the Bologna Academy—the oldest in Europe. The following summer, before returning to St. Petersburg, Shubin and the Demidovs undertook one more journey—to London.

The sculptor’s first work in his home country was a bust of Prince Alexander Golitsyn, a diplomat during Catherine’s reign (1775; plaster—RUSSIAN  MUSEUM, marble—Tretyakov Gallery). This is one of Shubin’s most brilliant works, an expressive image of an educated nobleman, in whom a sensitive mind merged with worldly refinement, and a sense of superiority with the tiredness of an ageing man. The folds of his garment, which underline the turn in his head and shoulders, are marvellously fashioned. This work, which earned the praise of Falconet, gives some idea of what Shubin’s contemporaries meant when they said that the marble ‘breathed’ under his chisel.

On 4 September 1774 the Academy of Arts awarded Shubin the title of academician for his bust of the Empress—in violation of the regulations, which stated that this title could be awarded only for historical or mythological works. This exception was possible because the court aristocracy and Catherine II herself were known to be kindly disposed towards the sculptor.

In the seventies Shubin produced a great many portraits, working quickly—at the rate of at least one bust per month. Everyone was eager to have his portrait done by the empress’s favourite. Yet the sculptor’s inexhaustible powers of observation and perspicacity meant that he never repeated himself, always finding new solutions based not so much on the models’ external characteristics as on their mental states.

In Shubin’s portraits we see the high society of St. Petersburg. Behind the superficial grace and elegance of the lady-in-waiting M. Panina (mid-1770s, Tretyakov Gallery), there are traces of coldness, imperiousness and arrogance. In his sculpture of the famous Field Marshal P. Rumyantsev-Zadunaisky (1777, RUSSIAN  MUSEUM) the artist brought out features of a strong and important personality, without in the slightest embellishing his appearance.

Quite another character is revealed in the portrait of V. Orlov (1778, Tretyakov Gallery). In the sculptor’s hands, his imposing exterior—his aristocratic carriage, his opulent drapery—is charged with irony. The dull, impudent face of this ungifted man who was head of the Academy of Sciences solely due to his family ties is reproduced with merciless realism.

The bust of the rich industrialist I. Baryshnikov (1778, Tretyakov Gallery) is simple and severe in composition. Shubin saw this representative of the rising bourgeoisie as a shrewd and intelligent businessman; his individual and social features are brilliantly blended.

In the portrait of P. Zavadsky, Catherine II’s State Secretary (mid-1770s, Tretyakov Gallery) one is struck by its emotionality and romantic mood—a mood intensified by the plasticity of the form and by the fast, vigorous style of modelling.

Shubin revealed the innermost workings of the soul in the remarkably poetic image of an unknown young man (mid-1770s, Tretyakov Gallery). The calm composition and soft modelling convey the young man’s state of deep thoughtfulness.

In 1774-1775 Shubin worked on a portrait of Catherine II and on a series of 58 round marble bas-reliefs (about 70 cm in diameter) depicting princes and rulers from Ryurik up to Elizaveta Petrovna. The bas-reliefs were intended for the Round Hall of the ChesmenskyPalace and are now kept in the Armoury of the Kremlin. They were based upon descriptions of the various characters given in ancient chronicles.

Over the next ten years Shubin carried out many commissions for decorative works—statues and reliefs for the Marble Palace, sculptures for the Trinity Cathedral in the Ale­xander Nevsky Monastery (Lavra), a marble mausoleum for Lieutenant General P. Golitsyn. Shubin’s last decorative work was a statue of Pandora to replace one of the decaying leaden sculptures of Peterhof. Its prototype was Falconet’s Woman Bathing, which Shubin had copied in Paris.

The most noteworthy of Shubin’s works of the 1780s were his busts of P. Sheremetev (1783, Kuskovo) and General I. Michelson (1785, RUSSIAN  MUSEUM), his medallion with a profile representation of Catherine II and his sculptured bust of the empress (1783, RUSSIAN  MUSEUM).

A special place in Shubin’s work is occupied by his statue Catherine II the Legislatress (1789-1790, RUSSIAN  MUSEUM). This statue was very successful, but the sculptor received no reward from the empress, nor did he obtain a post as professor at the Academy, where portrait sculpture was considered a “low genre”.

Gradually, interest in Shubin faded. His unembellished portraits found less and less favour among his clients from the beau monde, who wished to see themselves depicted in ideal form. He received less commissions, and remuneration fell too. He was forced to seek help from G. Potyomkin, who wrote to the President of the Academy of Arts, I. Betskoi, asking him to employ Shubin as assistant professor in the sculpture class. The sculptor himself also applied to the Council of the Academy for a paid post. Both letters remained unanswered. Then, in 1792, Shubin addressed himself to Catherine II: “Your Majesty, I am in poor health and must needs ask you for help . . .” Two years passed before the celebrated sculptor was installed as a professor—but still it was not a paid post. As it was, Shubin was a sick man, burdened by a large family, and all these adversities further undermined his health, but he did not stop working. The works dating from the nineties speak eloquently of the sculptor’s ability to reveal his models’ characters fully and profoundly. His gallery of portraits is varied: the dried-up old warrior Admiral V. Chichagov (1791, RUSSIAN  MUSEUM), the good-natured, haughty sybarite G. Potyomkin (1791, RUSSIAN  MUSEUM), the empty, self-enamoured beau Platon Zubov (1796, Tretyakov Gallery), the pedantic I. Betskoi (1790s, Tretyakov Gallery) and the dull-witted, swaggering St. Petersburg mayor Ye. Chulkov (1792, RUSSIAN  MUSEUM).

In 1792 Shubin made a portrait of Mikhail Lomonosov from memory (RUSSIAN  MUSEUM). In contrast to the others, this portrait is deeply democratic, simple in composition and form, full of intellectuality and entirely lacking in showy, official elements.

Shubin’s bust of Paul I (1797, marble, RUSSIAN  MUSEUM) is a true masterpiece of portraiture. It is a complex image, comprising arrogance, cold cruelty, unhealthiness and deeply concealed suffering. Nonetheless Paul liked the work, apparently because of the signs of solemn majesty which he valued so highly.

Each year Shubin’s position grew more difficult. In 1797 he turned to Paul for assistance, and a year later he appealed to the Academy “to provide at least an apartment at the state’s expense, and firewood and candles”. But this request, too, was given no consideration. Shubin had no means to support his family, he was beginning to go blind, and in 1801 his house and studio—together with the works it contained —were burnt down.

These blows of fate did not force Shubin to compromise. In one of his last works—a bust of Alexander I (1801, Voronezh Regional Museum of Fine Arts)—there is a strain of cold indifference behind the emperor’s affable exterior. Alexander did display charity, however, and presented the sculptor with a diamond ring. The Academy, too, was at last compelled to show some concern for Shubin, and he was given the free accommodation and candles he had begged for so long. In 1803, Alexander I decreed that Shubin finally be appointed assistant professor, on the paid staff of the Academy. But his health was utterly ruined, and on 12 May 1805 Shubin died.

The sculptor’s death passed almost unnoticed. His realism could not possibly meet with the approval of his titled customers. It was a tragic end to the life of a man whose art, in the words of sculptress Vera Mukhina, was the “image of the age”.