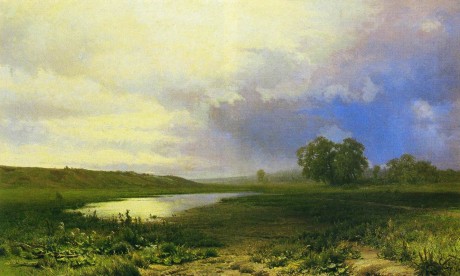 Fyodor Vasiliev was born at Gatchina, into the family of a low-rank post-office official. When he was twelve the family moved to St. Petersburg and settled on the VasilievskyIs­land. Fyodor’s childhood was joyless, with his family in constant material difficulties. For a time the future artist worked as a postman and then joined the drawing school run by the Society for the Furtherance of the Arts. Two small, freshly-coloured landscapes—In the Church Grounds (1867, RUSSIAN  MUSEUM, SAINT PETERSBURG) and A Village Yard (1867, RUSSIAN  MUSEUM, SAINT PETERSBURG)—and several drawings, the best of which were done on the island of Va­laam, all date from this period.

The young artist was exhilarated by the beau­ty of the wild, untouched scenery of Valaam, which he visited with Ivan Shishkin in 1867. Shishkin gave him advice, teaching him to ob­serve nature closely and to depict it in minute detail. Shishkin’s influence can partly be seen in Vasiliev’s early landscape A Village (1868, TRETYAKOV GALLERY, MOSCOW), although it is even closer to some Russian landscapes of the early nineteenth century. The motif is commonplace. The landscape is narra­tive. With small brush-strokes, the artist gives a detailed description of run-down cottages, a winding road and pools of water reflecting the clouds. The composition suffers from being rather fragmented, however, and the colour harmony is not quite right.

Having finished the drawing school in 1868, Vasiliev was drawn towards the St. Petersburg Artists’ Artel. Witty and charming, he soon be­came everybody’s favourite, but he was particu­larly friendly with Ivan Kramskoi. Kramskoi never ceased to admire the young man’s extra­ordinary giftedness, likening him to ‘a rich man in a fairy tale, who at the same time is fabulously generous and flings his riches in handfuls in all directions, without counting them or even ap­preciating their value’’. 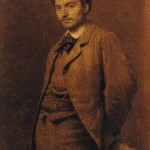 I. N. Kramskoi. Portrait of F. A. Vasiliev 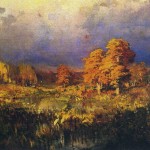 Marsh in the Forest. Autumn 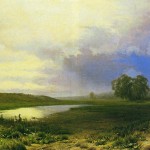 Vasiliev spent the summer of 1869 first at Znamenskoye, Stroganov’s Tambov estate, then at Khoten in the Ukraine. The fruit of this trip was the painting After the Rain (1869, TRETYAKOV GALLERY, MOSCOW) in which the artist strove not only to give a con­crete representation of the motif, but to convey the state of nature: the earth moist from recent rain, the freshness of the foliage, the puddles sparkling in the rays of sunlight breaking through the storm-clouds. In this landscape one can already hear the lyrical notes that would sound in all of Vasiliev’s subsequent works.

An important phase in the painter’s artistic development was the trip on the Volga which he undertook in 1870 with Ilya Repin and Ye. Makarov. Vasiliev’s enormous capacity for work, his powers of observation and the high ar­tistic qualities of his brief travel sketches aston­ished his companions. In his book Far and Near Repin recalled: ‘He impressed us at every even faintly interesting stop. For ten minutes, while the steamer was still, his finely sharpened pencil would dash with the speed of a sewing-machine needle over the small page of his pocket album, faithfully and impressively marking out a whole picture of the steep bank, with crooked little cottages above the slope, fences, stunted trees and pointed church bell-towers in the dis­tance. . . The steamer would move off and the wizard would shut the book and stuff it into his side-pocket. The first few times we simply gaped in wonder.’

Vasiliev was interested in everything: the distinctive Volga landscapes, the life of the local people, the labour of the barge-haulers; but he was particularly fascinated by the boundless ex­panses of the huge river. From this time on­wards the Volga was a recurrent theme in his work.

The character of the river is best conveyed in the painting View of the Volga (1870, RUSSIAN  MUSEUM, SAINT PETERSBURG). Here Vasiliev depicts the distant sandy bank, with moored long-boats and barge-haulers near them. Woolly clouds scud low over the land, not hiding the sun. The peaceful blue of the sky and the golden glance of the banks are reflected in rainbow colours in the smooth mirror of the water. There is harmony in nature. Painted in an untrammelled style, the landscape demon­strates the artist’s ability to single out the essence of the scene; the lighting is natural and the colours are pure and rich.

It was The Thaw (1871, RUSSIAN  MUSEUM, SAINT PETERSBURG) that brought fame to the artist. It is early spring; the melting snow has flooded a narrow country road; gusts of wind incline the bare branches on the trees; a weak ray of sun barely penetrates the heavy clouds; nature is in the throes of waking from its deep winter sleep. The picture’s composition emphasises the desolation and vastness of the scene, and the combination of doleful brownish- grey and yellow shades helps to express the mel­ancholy mood. Other details—the little cottage at the side of the road, the figures of a peasant and a little girl wandering out in the dismal weather—add more weight to the impression of homelessness. The sad lyricism of the painting evokes thoughts of the poverty and unsettled nature of Russian life, and there is a hint of the social motif characteristic of the art of the time. This idea is expressed emotionally, how­ever, not obtrusively or didactically. The Thaw gave a new direction to Russian landscape-paint­ing; its author, according to Kramskoi, ‘was de­stined to introduce into the Russian landscape what it had always lacked—poetry as well as na­turalness of execution’. The work was awarded a prize at a competition of the Society for the Furtherance of the Arts, and in 1872 it was sent to an exhibition in London, where it also met with success. The Morning Post published a review expressing confidence that no one was better qualified than the author of this work to paint the streets of London during the thaw, and Vasiliev was invited to London; but the ar­tist was no longer in St. Petersburg when this news arrived.

In the winter of 1871 Vasiliev had contracted tuberculosis and in July he went to Yalta at the expense of the Society for the Furtherarre of the Arts.

In Yalta Vasiliev continued to paint—from sketches, studies and memories. In 1872 he pro­duced his masterpiece—A Wet Meadow (TRETYAKOV GALLERY, MOSCOW)—a generalised evocation of Russian na­ture. The fine balance of the composition, the complex colour relations and the picture’s smooth rhythm convey an impression of gran­deur and significance. A Wet Meadow is one of the finest examples of Russian landscape- painting.

Vasiliev’s life in the Crimea was not happy. Far from the centre of Russia, he was deprived of the chance to see the works of other artists; moreover, he was perpetually in financial straits and was even forced to accept a commission by Grand Prince Vladimir Alexandrovich for Cri­mean landscapes. Carrying out this commission was a torture for the artist, who was uninspired by the Crimea, and he produced only one paint­ing: Eriklik (1872, RUSSIAN  MUSEUM, SAINT PETERSBURG), a view of the Yalta bay from the mountains. The painting turned out cold and rather unsuccessful.

With time, however, Vasiliev grew accustomed to the Crimean scenery and found spots that harmonised with his mental state—principally the unpopulated, wild, mountainous areas. In the CrimeanMountains (1873, TRETYAKOV GALLERY, MOSCOW), is a roman­tic elevated image of the Crimea. The solemn rhythm of the composition and the severe, al­most monochromatic colouring evoke a tragic mood of abandonment. Ivan Kramskoi wrote: ‘…there is something misty, almost mystical, bewitching, as though it were not a picture but a symphony, reaching our ears from above, and below, on Earth where objects should be real… a sick and suffering man. Never before had I imagined that a landscape could evoke such strong sensations . . .’

In the last year of his life Vasiliev was again seized by a feeling of loneliness and homesick­ness, and he painted the Russian landscapes De­relict Windmill (1872-73, TRETYAKOV GALLERY, MOSCOW) and Marsh in the Forest. Autumn (1872-73, RUSSIAN  MUSEUM, SAINT PETERSBURG). The emotion and sorrow with which the artist worked at that time may be judged from his letter to Kramskoi: ‘In this instance I want to depict morning over a marshland. Don’t think, by the way, that this is a real marsh. No, the real one lies ahead, and this is only a preparation. Oh that marsh! If only you knew how my heart aches with dark forebod­ing. Shall I really never again breathe this free­dom, this life-giving power of the morning awaking over the misty water? For everything, everything will be taken from me if this is taken. As an artist I shall lose more than half the world.’

The picture was painted during a sweltering Crimean summer, but what appeared on the canvas was a Russian autumn. There is a dense forest, and a marsh grown with unusual grasses and ferns; it is an eerie, ugly swamp, eternally wrapped in a sinister desolate silence; the shad­ow of a dark cloud which hangs above the woods lies motionless over the water, and the last ray of sun lights up the foliage in a fantastic flame; everything is still, holding its breath. The motif is very simple, and the viewer is affected above all by the painting itself—the colour and texture. The artist succeeded in subtly convey­ing the wealth of autumn colours, isolating what is most important in the juxtaposition of the blue sky and reddish leaves. The colour con­trasts and dynamic brushwork express the ten­sion in nature before a storm and the tragedy of the artist’s sufferings. With this work Vasiliev set the course of Russian landscape-painting for a long time to come.

Marsh in the Forest. Autumn was the artist’s farewell to his homeland. Vasiliev died on 24 September 1873 and was buried in the Old Massandra Cemetery in Yalta.