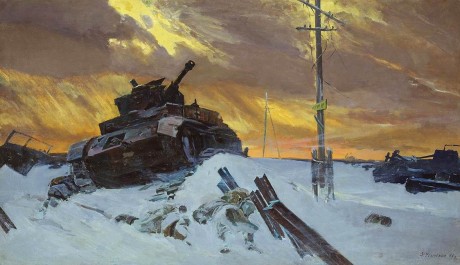 “I am a history painter,” says Fyodor Usypenko, one of the artists who created the huge diorama entitled “Alexander Suvorov’s Alpine Campaign”. Led by Suvorov, the many-thousand strong Russian army did something next to impossible in 1799, forcing its way across the high snow-clad mountain passes to surprise the enemy. Usypenko also took part in restoring Franz Rubo’s renowned panorama called “The Battle of Borodino” featuring the battle near Moscow that foreshadowed Napoleon’s defeat in Russia and later in Europe.

But Usypenko paints not only far-away historical events. He created a diorama for the BorodinoMuseum, which depicted the battle near the village fought by the Soviet soldiers defending Moscow in 1941. He also commemorated on paper and on canvas some episodes of the last days of the Second World War, when the Soviet Union declared war on militarist Japan.

The Second World War dominates Usypenko’s work. His canvases and dioramas feature battles in the foothills of the Caucasus, the lower reaches of the Kuban, near Novorossiisk, on the Dnieper at the town of Kremenchug, in Stalingrad, in Poland and in Konigsberg. He paints attacks, crossings, marches. 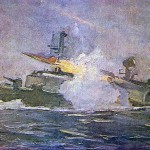 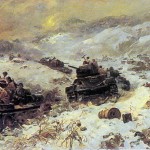 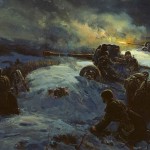 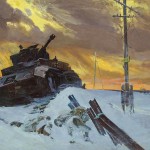 The painter himself, naturally, could not have possibly taken part in all the events he depicts, so vast is the territory they covered. But he certainly had a close-up view of the war. He was by the side of soldiers defending Kiev and liberating Krakow. Victory Day found him in Prague. He knows from experience what war is like. “But to create a history painting,” Usypenko says, “it is not enough to know how things happen; you’ve got to know how they happened on each particular occasion. An accurate description of landscape and a realistic view of the battle scene are a must for a history painter. It means long hours in the archives, and talking to the heroes of the battles.”

In August 1945, Usypenko, as a war painter, accompanied the Soviet troops that launched an offensive against the Japanese Kwantung army. His jeep followed on the heels of the tanks entering Changchun, Harbin, Mukden and Port Arthur. The many sketches he made at the time supplied him with subjects for several paintings. One of them is “Soviet Troops Crossing the Greater Khingan.”

“Crossing” is not an emotional word. We are talking about a campaign unparalleled in modern warfare. Several armies, including a tank army, marched across an almost impassable mountain range in just a few days. They moved under pouring monsoon rains, covering hundreds of kilometres a day. If there is something to equal the feat, it is perhaps that legendary crossing of the Alps by Suvorov. Both campaigns are remarkable for their surprise, daring concepts and the courage and fortitude of the men. Forcing the Khingan, the Soviet troops attacked the Kwantung army from the rear. This powerful attack contributed to the speedy victory, which led to Japan’s surrender.

Usypenko’s work features both Suvorov’s campaign and the campaign conducted by the Soviet Marshal Vassilevsky. Commenting on his painting and recalling the events of 1945, the artist quoted the aphorism of the great military commander: “Remember Suvorov’s favourite words—where a deer can’t pass, the Russian soldier will.”