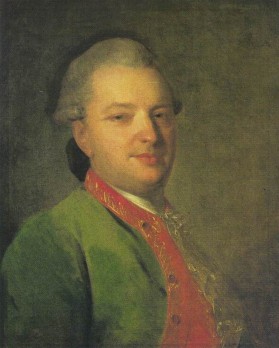 For a long time the life of Fyodor Rokotov, the most poetic portraitist of the eighteenth century, remained a riddle. Having been very famous during his life, Rokotov was forgotten for a whole century after his death, and it was only this century that his name was restored to its rightful place in the history of Russian art.

For many years he was thought to have been of noble birth. But recently found documents have shown that in fact Rokotov was born the son of a serf, on the Vorontsovo estate near Moscow, which belonged to Prince Repnin. He is thought to have been born in 1735, and we find the first written mention of him as an artist in 1757, when the Portrait of an Unknown Young Man in Guards Uniform (Tretyakov Gallery, Moscow) was painted. Another painting dating from this time I.Shuvalov’s Study, known to us from a copy made by Rokotov’s pupil A. Zyablov (1779, State Historical Museum, Moscow).

Count Shuvalov gave all possible support to the young artist, and it was on his recommendation that Rokotov was accepted by the Academy as a pupil in 1760. The artist’s successes attracted attention and soon he became known to the Court. In 1762, as a result of his large full-dress portrait of Peter III (RUSSIAN  MUSEUM, St.Petersburg), he was made an assistant professor. Among the best works from Rokotov’s early period were his Portrait of Catherine II in Coronation Dress (1763, Tretyakov Gallery, Moscow) which served as a kind of standard from which copies were made, and his portrait of the empress’ favourite Grigory Orlov (1762-63, Tretyakov Gallery, Moscow). 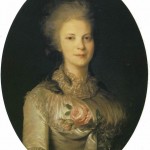 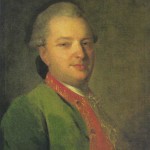 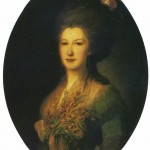 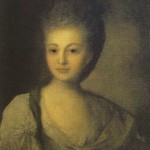 Rokotov’s full-dress portraits are beautifully decorative and skilfully drawn. Given the demands placed by the genre on the structure of each work, the artist always managed to vary the composition interestingly.

In the sixties Rokotov painted a series of informal portraits, mainly of men, which demonstrate his desire to capture both the external features and the personalities of his models. He produced expressive likenesses of the intelligent, refined aristocrat I. Orlov (RUSSIAN  MUSEUM, St.Petersburg) and of the talented statesman and writer I. Golenishchev-Kutuzov, the uncle of the famous general (RUSSIAN  MUSEUM, St.Petersburg). Particularly interesting is his portrait of V. Maikov (c. 1765, Tretyakov Gallery, Moscow), behind whose languid effeminacy one can sense the talented poet’s acumen and ironic turn of mind. Maikov’s sensitive face is painted almost tangibly, and the colour-scheme, based on reds and greens, serves further to underline the full-bloodedness and liveliness of the image. This is one of the most significant works in eighteenth century art. Rokotov had a great reputation in those days, and received so many commissions that he could not cope with them all alone. For this reason he himself very often painted only the main part of his portraits—the face—while his assistants did the clothes and other details.

In 1775, for his copy of Giordano’s Venus, Cupid and Satyr, made from an etching by Francesco Bartolozzi, Rokotov received the title of academician and left the capital for ever.

Moscow, which was Rokotov’s destination, at that time allowed greater creative freedom than official St. Petersburg. It was there that outstanding Russian enlightener N. Novikov and the talented dramatist A. Sumarokov were working, and it was there that the well-known poet Kheraskov formed his literary circle for young people. In this enlightened, progressive environment, Rokotov’s world-outlook, which was clearly in evidence in his works from the end of the sixties, took shape.

The last official commission, carried out not later than 1768, was a series of portraits of the trustees of the Moscow Foundling Hospital: I. Tyutchev (Tretyakov Gallery, Moscow), S. Gagarin (RUSSIAN  MUSEUM, St.Petersburg) and P. Vyrubov (Tretyakov Gallery, Moscow). Already in these works one can feel Rokotov’s leaning towards simplicity even in the full-dress portrait, and in the years to come he devoted himself entirely to work on chamber portraits. It was at this period that Rokotov’s own individual style and manner of painting developed. Most often he painted oval portraits, the shape of the canvas underlining the overall rhythmic construction of the works. Rokotov’s figures are portrayed at varying distances, as a rule from the waist up and turning slightly. Even the model’s most insignificant, restrained movements are a result of his inner state. In Rokotov’s method of characterization, the expressiveness of the eyes and face are very important, his aim being not so much to give a concrete expression of the mood, but rather to create a sense of elusiveness and transience of human feelings.

Rokotov’s works are marked by the refined beauty of their colour range. Usually based on three colours, they express the richness and complexity of the subject’s inner world. Moreover, the artist makes distinctive use of chiaroscuro, highlighting the face and ‘dissolving’, as it were, the secondary details.

These features of Rokotov’s art manifested themselves most fully in his female portraits, which held a special place in the art of the eighteenth century. At his peak the artist created a gallery of beautiful female images: A. Struiskaya (1772, Tretyakov Gallery, Moscow), V. Novosiltseva (1780, Tretyakov Gallery, Moscow), Ye. Santi (1785, RUSSIAN  MUSEUM, St.Petersburg) and V. Surovtseva (1780, RUSSIAN  MUSEUM, St.Petersburg). Each portrait is highly individual, beautiful in its own way. Like a bewitching apparition, Alexandra Struiskaya’s face with its huge eyes emerges from a haze of pearly roseate hues. Her image is full of radiant purity and the intransient beauty of youth. In the portrait of V. Novosiltseva one feels her grandeur and dignity, her self-assurance and her faculty for deep thought. A pallid, delicate face, eyes slightly screwed up, looking sharply, and lips trembling with a barely perceptible smile—such is the cold, ironical Santi; her aristocracy is emphasised by a delicate combination of pinks and greens. And finally—Surovtseva, charming and feminine, with a modest Russian face and a direct, kindly look in her clear, radiant eyes.

Yet for all their individuality, Rokotov’s female figures do have something in common: a complex spiritual world, a rich and beautiful inner life, and elevated human emotions. While revealing the innermost secrets of the human soul, the painter always leaves something unsaid. And this is what gives Rokotov’s portraits their fascinating mysteriousness and special poetic qualities.

The lyricism of these enigmatic images was marvellously expressed by the poet Nikolai Zabolotsky in his poem Portrait:

Recall how from the depths of time,

The union of two mysteries,

A wave of reckless tenderness,

A vision of death horror.

The ideal of the man moulded by the enlightened aristocratic environment—’honour, elegance and inner dignity’—was expressed by Rokotov in his male portraits of representatives of noble intelligentsia: Surovtsev (1780, RUSSIAN  MUSEUM, St.Petersburg), the poet Sumarokov (1777, State Historical Museum, Moscow), the gifted diplomat Obreskov (1777, Tretyakov Gallery, Moscow). The portrait of Obreskov is remarkable for its fine detail and deep penetration into the character of an energetic, clever, perceptive man.

Rokotov’s contemporary and ardent admirer N.Struisky wrote that the artist worked very quickly and lightly, ‘almost playfully’. Even in old age he worked hard and with great inspiration.

Of his last years we know only that he lived continuously in Moscow. Having no family of his own, his nearest relations and heirs were his nephews.

Fyodor Rokotov died on 24 December 1808 inMoscow and was laid to rest in the Novo-Spassky Monastery.