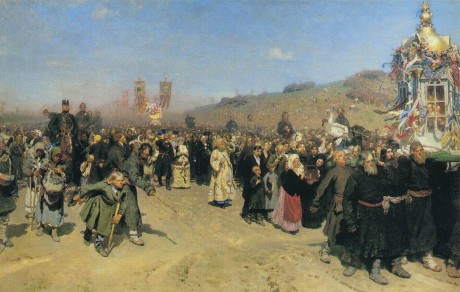 Ilya Repin, the son of an officer, was born in the town of Chuguyev, Kharkov Gubernia. In his childhood and youth the future artist suifered privations and painted icons and por­traits to earn money. He had his first les­sons in drawing at the school of topography.

The first teachers who directed his talent were the Chuguyev artists I. M. Bunakov and L. I. Persanov. In 1863 Repin decided to take the risk and go to St. Petersburg. At the Stock-ExchangeDrawingSchool he met Ivan Krams­koi, who immediately noticed his outstand­ing talent and became his friend and mentor for many years. In 1864 Repin entered the Academy of Arts and in 1871 he graduated brilliantly with the painting The Raising of Jairus’s Daughter (1871, RUSSIAN  MUSEUM, SAINT PETERSBURG). The merit of this work lay in Repin’s ability to reinterpret traditional academic laws.

Repin’s other ‘academy’ in those years was Kramskoi’s famous Artel, which was started up in St. Petersburg in 1865 and played an important role in the artist’s development. Repin’s Barge-Haulers on the Volga (RUSSIAN  MUSEUM, SAINT PETERSBURG) caused a stir when it was exhibited in 1873. ‘Never before has the bitter fate of these human pack-animals been expressed on canvas in such a terrifying, penetrating chord. ’It is a human mosaic from all corners of Russia,’ wrote Sta­sov. 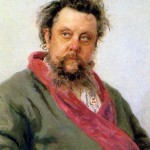 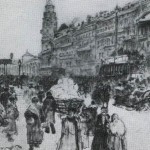 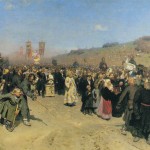 A Religious Procession in Kursk Gubernia 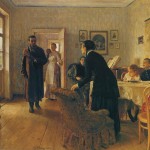 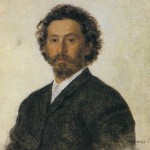 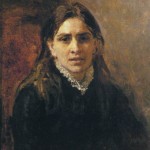 Portrait of P. A. Strepetova 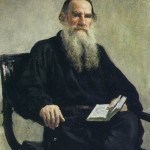 Contemporaries saw the power of the human spirit in the picture, and many articles appeared about it in the press. Repin’s name was quickly famous. He becomes generally acknowledged as an artist of truly immense range.

The award of a gold medal brought with it the right to travel to France. In May 1873 he set off on a journey round Austria and Italy. In letters to Stasov, Kramskoi and Tretyakov he shared his thoughts about art, wrote of his admiration for Michelangelo and the colour perfection in the works of Veronese, Titian and Tintoretto, and enthused about portraits by Velazquez and Rembrandt.

Repin really got into his stride once he returned to Russia in 1876. He joined the Society of Peredvizhniki and in the eighties became its leading artist, the author of his­torical and genre compositions and a brilliant portraitist.

Many aspects of contemporary life and a wealth of popular types and characters found their reflection in Repin’s work, embodied in a kind of artistic chronicle of the age. These types range from the irate, long-suffering peasant of The Peasant with the Evil Eye (1877, TRETYAKOV GALLERY, MOSCOW) to the

Even when Repin looks at the past it is to understand more deeply the present, the roots of the national character, the causes of histori­cal conflicts, the depth of psychological suffer­ings.

His first work on a subject from Russian histo­ry was The Tsar’s Daughter Sofia Alexeyevna at Novodevichy Nunnery in 1698 (1879, TRETYAKOV GALLERY, MOSCOW). In the years of reaction that quelled the Populist movement there appeared the painting Ivan the Terrible and his Son Ivan on 16 November 1581 (1885, TRETYAKOV GALLERY, MOSCOW). The idea for the picture came about in response to the sanguinary events of the pe­riod, as an angry protest against despotism. Repin recalled: ‘The bloody event of March 1 upset everyone. A kind of bloody streak went through this year … I worked like a madman. At times I was terrified’. The procurator of the Synod, Pobedonostsev, reported angrily to the tsar about the painting: ‘Remarkable art we have these days: without the slightest ideals— just bare realism, with a tendency to criticise and expose.’ The appearance of Ivan the Terrible synthesises certain features of the artist Mya- soyedov and the composer Blaramberg, while his son Ivan includes traits of the writer Garshin and the artist Menk.

Repin worked for about twelve years on the painting The Zaporozhian Cossacks Write a Let­ter to the Turkish Sultan (1880-91, RUSSIAN  MUSEUM, SAINT PETERSBURG), the original idea for the work having arisen in 1878. In it he wanted to show the broad, freedom-loving characters of the Zaporozhians—‘dare­devils . . . the most gifted people of their time’, as he called them.

The determining factor in Repin’s work was his acute sense of contemporary life. By the nineties he had painted about 300 portraits, and he is rightly considered the leading Russian por­traitist of this period.

Repin liked to capture movement, but not for its own sake: every facial expression, gesture and attitude is tied up with the person’s state of mind. The dynamism of his portraits is therefore very important. ‘Here he uses unheard-of devices, which no one has ever tried out before,’ wrote Kramskoi about Repin’s portrait of the composer Mussorgsky (1881, TRETYAKOV GALLERY, MOSCOW). Each of the subjects is portrayed in a vivid individual man­ner, with the stress on those unique features that most fully disclose the essence of his character. Thus, the penetrating, inquisitive gaze of the surgeon N. I. Pirogov (1881, TRETYAKOV GALLERY, MOSCOW) expresses his restless, searching, wilful character. And the inspiration and excitability of the actress P. A. Strepetova are clearly shown in the intense look of her shaded eyes and in her gesture.

By the end of the century Repin had gained wide public recognition. A personal exhibi­tion of his works was opened, and after the reform of the Academy of Arts he was made a professor. Many talented youngsters lear­ned in his studio, among them I. S. Kulikov, F. A. Malyavin, A. P. Ostroumova-Lebedeva and B. M. Kustodiev.

In 1901 the artist received a government commission—to paint the celebratory session of the State Council on the day of its hundredth anniversary. The grand picture (35 m2) Cere­monial Session of the State Council, 7 May 1901 (1901—03, RUSSIAN  MUSEUM, SAINT PETERSBURG), on which Boris Kustodiyev and I. S. Kulikov collaborated, took two years to complete. This multiple portrait depicts more than eighty dignitaries of the State Council, headed by the tsar and members of the royal family. Repin did more than fifty etudes and sketches for the work. His flowing, easy brush-work and power of typification make these por- trait-etudes the peak of Repin’s achievements.

The artist spent the last thirty years of his life in Kuokkala where he had a refurbished house with a studio, called Penates. In August 1930, at the age of eighty-six, Ilya Repin died.