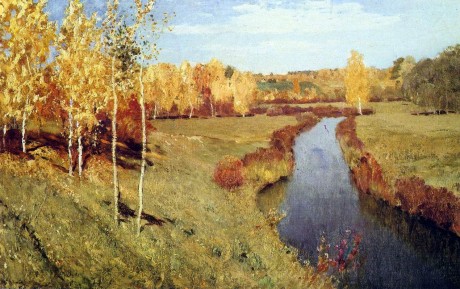 Isaak Levitan lived and worked at a period when Russian culture in all spheres was flourish­ing. His contemporaries were Repin and Suri­kov, Nesterov and Serov, Chekhov and Gorky, Chaliapin and Yermolova. In his short creative life Levitan produced about a thousand paint­ings, pastels and drawings.

He was born in the small Lithuanian town of Kibarty.His father worked as cashier at the rail­way station; the family was large and poor. In the hope of improving matters, the father took his family to Moscow, but his wife died suddenly and shortly thereafter he himself passed away.

When he was thirteen Levitan entered the Moscow School of Painting, Sculpture and Ar­chitecture. Though constantly hungry and pen­niless, often without even a roof over his head, he studied diligently. In September 1876 he found himself in Savrasov’s landscape class and later he became a pupil of Vasily Polenov.

Despite his success, the Council of the School declined to award him a silver medal, and the diploma he received merely entitled him to be a teacher of drawing. Levitan left the MoscowSchool. Later he would return there, a famous artist, and would run the landscape studio. 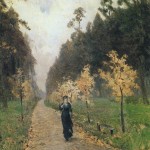 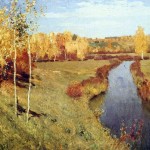 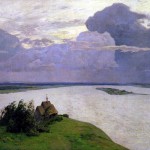 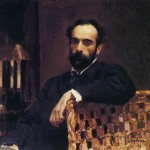 Among the earliest surviving works by Levi­tan are two small landscapes which were shown at student exhibitions—Evening (1877, TRETYAKOV GALLERY, MOSCOW) and Sunny Day. Spring (1877, private collec­tion). And although they are not devoid of faults — a certain naivete, and an overabundance of details—these works are full of a bright youth­ful love of nature. At a student exhibition of 1880 Pavel Tretyakov acquired the nineteen- year-old artist’s painting Autumn Day at Sokol­niki (TRETYAKOV GALLERY, MOSCOW). This was the first recognition of his’ talent. The work attempts to recreate the mood people have on a dismal wet autumn day. Yet the attempt to work in a new manner, sweeping and generalised, was still in many ways student- ish: the young artist still had to study nature more and master new painting devices.

In 1885, at the Kiselev estate in Babkino, Le­vitan met the writer Anton Chekhov, with whom he remained friends for the rest of his life.

It was not until the mid-eighties that the painter’s material circumstances improved. But his hungry childhood, hardships and intense work had already done damage to his health: his heart condition worsened considerably and he went to the Crimea to regain his strength. On his return he mounted an exhibition of sixty of his landscapes.

In 1887 Levitan at last realised his dream of visiting the Volga. The ‘Volga period’ in his work continued until 1890.

Levitan is one of the greatest poets of the Vol­ga. The scenery of the Volga region, with its boundless expanses and its alternating forests, valleys, fields, large towns and tiny villages, inspired him with new artistic material. His Vol­ga landscapes are quite varied … In Evening on the Volga (1888, TRETYAKOV GALLERY, MOSCOW) and Evening, Golden Pool (1889, TRETYAKOV GALLERY, MOSCOW), there is a sense of solemn si­lence and majestic tranquility. The picture After Rain; Plyos (1889, TRETYAKOV GALLERY, MOSCOW), on the other hand, has an altogether different emotional timbre. Here there is no peace: the wind chases the clouds and the water is disturbed . . . The bluish-silvery colours, with innumerable intermediate shades,’ give an impression of moving light and quiver­ing air. Particularly noteworthy are the pictures Golden Autumn in the Village (1889, RUSSIAN  MUSEUM, SAINT PETERSBURG) and Birch Grove (1889, TRETYAKOV GALLERY, MOSCOW) in which Levitan con­veys with great immediacy his perception of various states of nature. The artist’s infatua­tion with nature is evident in all these works.

‘I cannot be even vaguely happy, or at ease, I cannot understand myself, without painting. Never before have I loved nature as I do now, or been so sensitive to it,’ he wrote at this time to Chekhov.

In March 1891 Levitan became a member of the Society of Peredvizhniki. S. T. Morozov, a lover and patron of art, provided him with a studio.

Levitan’s work from 1890 to 1895 shows a desire to depict nature in an epic way: cf. A Pond (1892, TRETYAKOV GALLERY, MOSCOW), Vladimirsky Highroad (1892, TRETYAKOV GALLERY, MOSCOW), Eternal Peace (1894, TRETYAKOV GALLERY, MOSCOW). In Vladimirsky Highroad, one of Levitan’s best works, he de­picted a well-known highway which was taken by exiles heading for Siberia. The highway stretches into the distant violet horizon; at a cross­roads, where there is a rise in the soft undulat­ing land, stands a wayside shelter in which the exiles could rest. The darkened copses are silent, and the sweeping sky, the low horizon and the boundless plain create an impression of infinite space. In this painting we have an example of the enormous social message which a landscape- painter can invest in his works. Levitan gave the painting to the Tretyakov Gallery as a gift.

The artist’s constant search for new artistic forms found its expression in his picture Eternal Peace.

The vast Russian scenery forever attracted Levitan, which is seen both in his early paint­ings and in the majestic panoramas of his Volga cycle.

The year 1895 was a difficult one for Levitan. His heart-disease was sapping his strength, and was accompanied by attacks of pain and asthma. These physical disorders and his state of melan­choly sometimes brought Levitan to the brink of despair and attempts to commit suicide. But the life-giving force of his love of nature and art was strong enough to overcome his illness and even to lead him to new creative discoveries.

Levitan’s move in March 1894 to Tver Gu­bernia—to Ostrovno, and later to Gorki— ushered in the last period in his art.

The cycle of lyrical landscapes painted in 1895-96 is completed by the picture Flooding in Spring (1896-97, TRETYAKOV GALLERY, MOSCOW).

In 1898 Levitan was awarded the title of aca­demician of landscape painting. He taught at the Moscow School of Painting, Sculpture and Ar­chitecture, and his landscapes were exhibited at All-Russia exhibitions, and in Munich and Pa­ris. But, just as he gained universal recognition and fame, his health took a sharp turn for the worse and his heart-disease steadily progressed. A course of treatment abroad helped for a short while.

‘Levitan is dying, it seems,’ wrote Che­khov. . . Still his ‘terrible thirst for life’ fought against his illness.

The Lake (1899—1900, RUSSIAN  MUSEUM, SAINT PETERSBURG) was the last pic­ture he painted. Levitan considered calling the work Russia; it was to be a kind of synthesis of all his searchings. The Lake is a generalised image of the beautiful Russian countryside. Rus­sia, the Motherland—such were the artist’s last thoughts and feelings. He did not complete the picture as he wanted to. On 22 July 1900, Levitan passed away.