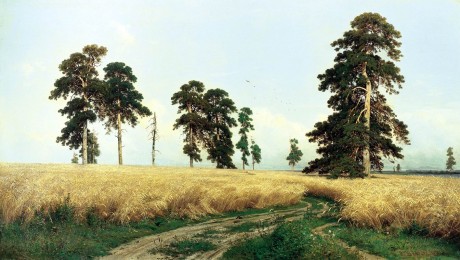 Ivan Shishkin was born in the small provincial town of Yelabuga. His father, a merchant of modest means, was a great lover of antiquity. In an effort to foster his son’s interest in history he took him to the archeological excavations of the ancient Bulgarian kingdom on the Volga, where he was helping the Moscow professor K. Nevostruyev. In 1844 the boy was sent to Kazan grammar-school, where he soon found friends with whom he could draw and discuss art. The set-up of the grammar-school, however, was an obstacle to his aspirations and inclinations, and after the summer holidays of 1848 he did not go back to the school—‘so that I would not become a clerk’, as he put it. Shishkin’s autobiography gives some idea of his activities as a young man, having freed himself from the ‘grammar-school with its narrow-minded formalism’.

In 1852 Shishkin entered the Moscow School of Painting and Sculpture and received a good grounding under the guidance of A. N. Mokritsky. From 1856 to 1860 he continued his studies at the St. Petersburg Academy of Arts under S. M. Vorobiov (whom, it should be said, he already outstripped as an artist). The young artist’s successes, which earned him gold and silver medals, upheld the hopes expressed by his former tutor Mokritsky when Shishkin was entering the Academy: ‘We have lost an ex­cellent, talented pupil, but we can expect, with time, to see him turn into an excellent artist if he continues to study with the same love at the Academy.’ Shishkin’s aspiration for ‘authenti­city, similarity and a portrait—like quality in the representation of nature’ was already in evidence in the early work View of the Environs of St. Petersburg (1856, RUSSIAN  MUSEUM, SAINT PETERSBURG).

In 1858-59 Shishkin often went to the island of Valaam, where the pupils of the Academy had practical summer courses. The severe, ma­jestic scenery there reminded the young artist of the natural beauty of the Urals area, where he had spent his childhood. 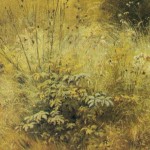 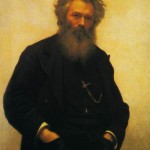 I. N. Kramskoi. Portrait of I. I. Shishkin 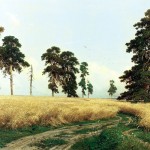 In 1860, for two of his Valaam landscapes, Shishkin received a first-class gold medal and the right to go abroad. He was in no hurry to leave, however, and in the spring of 1861 went to Yelabuga, where he did a good deal of painting in the countryside—‘which can only be of considerable benefit to the landscape- painter’.

He finally went abroad in 1862. Berlin and Dresden left him cold; all he felt was homesick­ness (‘why am I not in Russia, that I love so?’). Shishkin came to life, however, in Prague, where he ‘met many Czechs; the people are wonderful and are glad to speak Russian’. He was impressed by the drawings of ‘Slavonic types’ by the great Czech realist of the 1860s, Joseph Manes. In 1863 in Zurich Shishkin vi­sited the studio of the painter and engraver Sir Robert Collier, where he learned about the technique of etching.

The mountain scenes of Switzerland were new ground for the artist, and he produced dozens of sketches, from which he later painted three pictures, in St. Petersburg. Presently, with his colleagues from the Academy, L. L. Kame­nev and Ye. E. Dyukker, he began working in the TeutoburgForest near Dusseldorf. His pen-drawings attracted the attention of many art- lovers. Shishkin himself recalled: ‘Everywhere I went people pointed—“there goes that Rus­sian”—and even in shops they would ask whether I was that Russian, Shishkin, who did such marvellous drawings.’

In 1865 Shishkin returned to Russia and received the title of academician for the picture View in the Environs of Dusseldorf (1865, RUSSIAN  MUSEUM, SAINT PETERSBURG). He quickly slipped into the capital’s artistic cir­cles and attended the Thursday meetings of the Artists’ Artel. ‘Loudest of all,’ recalled Repin, ‘was the voice of the mighty Ivan Shishkin. Like an enormous green forest he infected eve­ryone with his health, jollity, good appetite and sincere Russian talk. He produced a fair amount of marvellous pen-drawings at these evenings. The audience behind his back used to gasp when he started erasing his wonderful drawing with his huge drayman’s hands and coarse hard-worked fingers, but by some mi­racle or magic the drawing would emerge from this rough treatment even more elegant and brilliant.’

Shishkin’s paintings Tree-Felling (1867, TRETYAKOV GALLERY, MOSCOW), At Sunset (1869, RUSSIAN  MUSEUM, SAINT PETERSBURG) and Midday in the Outskirts of Moscow (1869, TRETYAKOV GALLERY, MOSCOW), which reveal the distinctive beauty of the Russian landscape, foreshadowed the direction later developed by the Society of Peredvizhniki In 1870 Shishkin was one of the founding members of the So­ciety, together with Kramskoi, Perov, Myaso- yedov, Savrasov, Ghe and others. Ivan Krams­koi, who rated Shishkin’s art very highly and helped him—to the extent of giving him the use of his studio for his work on the competition painting Forest of Mast Timber in Vyatka Region (1872, in TRETYAKOV GALLERY, MOSCOW under the title Pine For­est)—wrote the following about Shishkin’s mer­its: ‘He simply amazes us with his knowledge . .. And when he has the landscape before him it’s as if he is in his element; immediately he is bold and agile and does not need to think about how, what or why … I think he is the only one among us who knows nature in a scholarly way.. . Shishkin is a milepost in the development of Russian landscape-painting he is a whole school in one man.’

At the Second Exhibition of Peredvizhniki Shishkin presented the painting In the Backwoods (RUSSIAN  MUSEUM, SAINT PETERSBURG), for which in 1873 he received the title of professor. The composition leads the eye from the shaded foreground to the weak patch of sunlight between the stunted trees in the depths of the wood, and the artist allows one to sense the humid air, the dampness of the mosses and fallen branches, and to soak in this atmosphere, as though one were alone in the oppressive wilder­ness. Quite different is the famous picture Rye (1878, TRETYAKOV GALLERY, MOSCOW), which is spacious and full of sun­light and air; it is an epic piece, a synthesis of the national characteristics of the Russian country­side, of the beloved, important traits which Shishkin saw in it—‘expansiveness; space; fields of rye; God’s paradise; Russian riches . . .’

The canvas Among the Even Valley (1883, State Museum of Russian Art, Kiev)—which took its title from a poem by A. F. Merzlyakov, known as a folk song—is suffused with a mixture of majesty and heartfelt lyricism. But the picture is not an illustration of the poetry. The imagery of the canvas results from a sense of the expan­siveness of the Russian landscape. There is something joyful, yet pensive too, in the broad, flung-open steppe (it is precisely this sensation that is evoked by the picture’s free, unre­strained composition), in the alternation of illu­minated and darkened patches, in the dried stalks strewn, so to speak, beneath the way­farer’s feet, and in the majestic oak which commands the scene.

Despite Shishkin’s successes in landscape- painting, his close friends strongly advised him to pay attention to expressive devices, particu­larly in conveying qualities of light and air. One had only to think of the fine colouring in the works of Repin and Surikov which were well- known by that time to appreciate the good sense of this advice. As a result, the appealing thing in Shishkin’s pictures Misty Morning (1885, Gor­kyStateArt Museum) and Pine-Trees in Sun­light (1886, TRETYAKOV GALLERY, MOSCOW) is not so much the composition as the harmony of chiaroscuro and colour. The same goes for other landscapes, such as Oaks (1887, RUSSIAN  MUSEUM, SAINT PETERSBURG), Golden Autumn (1888, PermStateArtGallery) and others.

Apart from painting, Shishkin was also a mas­ter of drawing and engraving. His drawing went through the same evolution as his painting. Those of the eighties, which were executed in charcoal and chalk, are much more expressive than the pen-drawings of the sixties. In 1891 more than 600 etudes and etchings were exhibit­ed at the Academy. The exhibition gave a good idea of the scope of this artist who was deeply aware of and sought to express the beauty and heroic power of the Russian countryside.

Shishkin’s career culminated in the grand composition Grove of Ship Timber (1898, RUSSIAN  MUSEUM, SAINT PETERSBURG), in which the artist’s experience and mastery ex­pressed the indelible impressions of his child­hood. The painting, completed not long before the artist’s death, depicts the Afonasov grove of ship-building timber near Yelabuga. It displays that familiar combination of great and small, of mighty and fragile, which Shishkin saw so clear­ly in the scenery of his homeland, and which he loved and glorified so sincerely in his art.

Shishkin died suddenly, on 8 March 1898, while working on the painting Forest Kingdom.