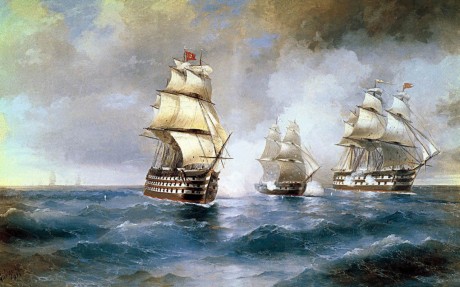 The work of Ivan Aivazovsky, who won worldwide fame in his own lifetime, can be regarded as a single epic poem of the sea, remarkably integrated in its perception of the world. A retrospective view of his work was given by the Soviet artist Martiros Sarian: ‘His art is the affirmation of man and humanity and the negation of despotism and violence. Aiva­zovsky was an artist who thirsted for and glori­fied freedom.’

He was born in Feodosia in the Crimea, the son of an Armenian merchant. Even as a child he displayed artistic ability, and particularly liked to draw ships and the sea. The young ar­tist’s talent came to the attention of the city ar­chitect Koch, who helped find him a place at the Simferopol grammar school (1830) and then in the Petersburg Academy of Arts, where he joined the class of the landscape painter M. N. Vorobiov (1833). The critics responded posi­tively to Aivazovsky’s first painting Study of the Air over the Sea (1835, TRETYAKOV GALLERY, MOSCOW), which was dis­played at an Academy exhibition. In 1837 he was awarded a first-class gold medal for three seascapes, in particular the splendid CalmSea, and before he went abroad he was commis­sioned to paint views of several Crimean towns. It was at this time that he painted views of Yalta, Feodosia, Sevastopol and Kerch and pictures entitled Moonlit Night and Storm. In the Crimea Aivazovsky met admirals M. P. La­zarev, V. A. Kornilov and P. S. Nakhimov, had an opportunity to study the construction of warships, took part in a sea landing on the Cau­casian coast, and painted his first battlepiece— Troops Landing near Subashi. During the ope­ration near Subashi he also met M. M. Naryshkin, A. I. Odoyevsky and N. N. Lorer, Decembrists, who had been degraded to the ranks. The new Crimean works were successfully exhibited at the Academy of Arts, and in 1840 Aivazovsky was given a chance to travel to Italy. 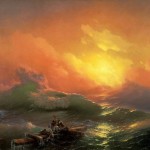 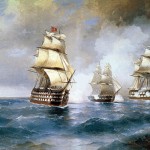 The Brig Mercury, after Her Victory Over Two Turkish Ships, Meets a Russian Squadron 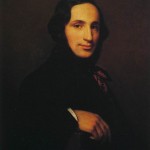 In Rome he studied and copied works by past masters, did studies from nature and also worked on compositions from memory. All along he enjoyed success. His picture Chaos was accepted for the Vatican museum. He had a great many admirers: artist and theorist Alexander Ivanov spoke of his rare faculty for depicting the sea; the engraver Francis Jourdain claimed that Aivazovsky was the founder of the genre of sea­scape in Rome and that after him ‘imitation Aivazovskys’ began to appear at exhibitions; the English seascape-painter Daniel Turner de­dicated an enthusiastic sonnet to him after see­ing the picture The Bay of Naples by Moonlight (1839, Feodosia, Aivazovsky Picture Gallery). In 1843 Aivazovsky embarked on a journey around Europe with an exhibition of his paint­ings. ‘Rome, Naples, Venice, Paris, London and Amsterdam conferred upon me the most flatter­ing awards,’ the artist recalled. One of these awards was the title of academician — from the Amsterdam Academy of Arts. At home, the St. PetersburgAcademy also made him an acade­mician.

In 1845, with an expedition led by F. P. Litke, Aivazovsky visited the coast of Turkey and Asia Minor. Shortly after returning to St. Petersburg he again left for Feodosia. ‘This feeling or habit is second nature to me,’ he wrote. ‘I enjoy spending winter in St. Petersburg, but at the first breath of spring I am assailed by homesickness and I am drawn to the Crimea and the Black Sea.’

Having built a house and studio there, Aiva­zovsky finally settled down in Feodosia for good, though almost every year he took his ex­hibitions to St. Petersburg and other Russian towns, and occasionally abroad. He painted thousands of works that testified to his know­ledge of the fickle moods of the sea — sometimes raging in furious grips of a storm, sometimes bright and transparent in light sunny haze, sometimes mysterious with a streak of moonlight quivering on the quiet waves. Aivazovsky was a constant observer of the elements at sea and made a huge number of sketches then using these drawings — and with the help of his wonderful memory and great gift for improvisation he could paint a whole canvas in a single day. The artist A. A. Rylov recalled that Aivazovsky once painted a view of the Black Sea in two hours, in front of students in Kuinji’s studio at the Academy. The artist expressed his creative credo in the following words: ‘A person who is not endowed with a memory that retains impressions of nature may make an excellent copyist, a living camera, but he will never make a real artist. The brush cannot catch the mo­ments of the living elements: it is inconceivable to paint lightning, or a gust of wind, or a splash­ing wave, from nature. The subject of a painting takes shape in my memory as the subject of a poem does in a poet’s.’

The well-known picture The Ninth Wave (1850, RUSSIAN  MUSEUM, SAINT PETERSBURG) belongs to Aivazovsky’s mature period. It conveys the strength that can be brought out in man by the elements: ship­wrecked sailors are seen encountering the dreaded ninth wave. An elevated romantic feeling is put across by the colouring — by the contrasts in the saturated dark-greens of the waves and the haze around the rising sun, and by the tinges in the foam of the tumul­tuous sea. The rich light and colour effects in this painting are evidently the same as were in Aivazovsky’s earlier works which astounded art-lovers on his travels in Europe.

Over the years the artist became more restrained in his rendering of the colour effects of nature, but he never lost his interest in the sea. The Wave (1889, RUSSIAN  MUSEUM, SAINT PETERSBURG) is dominated by an overwhelming, rearing mass of water, the colour of which is comprised of elusive half-tones of grey and light-blue. And in old age he painted the enormous canvas Amid the Waves (1898, Feodosia, Aivazovsky Picture Gallery) which wonderfully conveys the motion of the sea. There is poetry, however, not only in his drama­tic storm portrayals, but also in his calm sea­scapes — for example, in The Black Sea (1881, TRETYAKOV GALLERY, MOSCOW), about which the artist Ivan Kramskoi wrote: ‘The painting shows nothing but water and sky, but the water is a boundless ocean, not stor­my, but swelling, severe and infinite, and the sky—if that were possible—is even more infini­te. This is one of the grandest pictures I know!’ Aivazovsky was also important as a painter of battle-scenes. As ‘Painter to the Naval Staff’ (he was given this title in 1844) he depicted episodes from the defence of Sevastopol, and several times he treated the heroic feats of the Russian Navy. ‘Every victory of our troops on land or sea,’ he wrote, ‘gladdens my heart as a Russian and urges me to depict it on canvas.’ The Rus­sian Navy deeply appreciated the efforts of its chronicler. In the autumn of 1846 even before he painted the battle-piece The Battle of Navarin and The Battle of Chesmen (1848, Feodosia, Aivazovsky Picture Gallery), during an exhibi­tion timed to mark his tenth year as an artist, a squadron of six warships under the command of V. A. Kornilov called in Feodosia to celebrate the occasion. Aivazovsky was granted the free­dom of Feodosia, and he was buried with mili­tary honours.

Aivazovsky responded in his work to contem­porary political life, for example, to the move­ment led by Giuseppe Garibaldi and to episodes from the struggle of the Greek people against Turkish rule. He died on 19 April 1900 while working on the picture A Turkish Ship Blowing Up.

Aivazovsky did much to help provide ameni­ties for the city of Feodosia. Due to his efforts, the city gained an Archeological Museum, a school, a club, and in 1880 a picture gallery. Ar­tists such as Lagorio, Kuinji, Bogayevsky and Voloshin benefited greatly by the gallery and by Aivazovsky’s own studio. After his death the picture gallery was bequeathed to the city, and it now contains the largest collection of the master’s works.