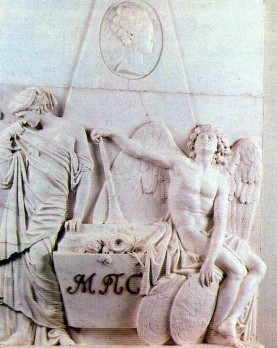 Ivan Martos was born in the village of Ichne in the Chernigov region of the Ukraine. At the age of twelve he was sent to the Academy of Arts, where for eight years he studied sculpture under Nicolas Gillet and drawing under Anton Losenko.

Graduating from the Academy with a gold medal, he went to Rome to further his education. Here the young artist made a thorough study of ancient art, especially classical sculpture and architecture.

On his return to St. Petersburg Martos became a teacher at the Academy and steadily climbed the ladder of promotion: first he became an academician, then professor, and later he was appointed rector of the Academy.

Even the young sculptor’s earliest works show signs of artistic maturity. Among these works was the marble bust of Nikita Panin (1780, TRETYAKOV GALLERY, MOSCOW). Striving to endow the image with importance and grandeur, Martos depicted Panin in classical apparel, successfully using a frontal positioning of the figure.

At this period Martos began working in the field of sculptured tombstones, an entirely new sphere of Russian representative art. And it was in this field that Martos excelled. The tombstones which he carved in 1782—for S. S. Volkonskaya (TRETYAKOV GALLERY, MOSCOW) and M. P. Sobakina (Museum of Architecture at the Academy of Building and Architecture)—are veritable masterpieces of Russian sculpture. Sobakina’s stone is marked by musical lines, beautiful rhythms and a very expressive composition. The figures of the mourner and the genius of death at the base of the pyramid are the embodiment of sincere sorrow. Despite the complex positioning of the figures and the abundance of drapery, the composition is perceived as a harmonious whole. On the tombstone for S. S. Volkonskaya is depicted a solitary mourning woman, full of restrained sorrow. The laconic clear imagery of this monument, the fine low relief work and the delicate treatment of the marble make this one of the most accomplished examples of Russian sculpture. 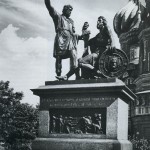 Monument to Minin and Pozharsky 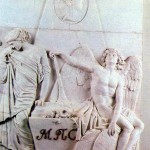 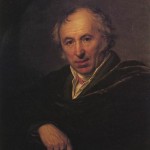 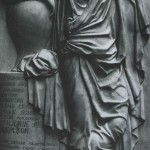 These works were so successful that Martos began to receive a large number of commissions, as a result of which he carved gravestones for N. A. Bryus (1786-90, Museum of Architecture at the Academy of Building and Architecture), N. I. Panin (1790), Ye. S. Kurakina (1792), A. F. Turchaninov (1796), A. I. Lazarev (1803) and Ye. I. Gagarina (1803; all are in the Leningrad Museum of Town Sculpture). These stones vary in composition and method of execution; the earlier ones tend to be lyrical and intimate, while the later ones are rather monumental, sometimes tragic.

The most outstanding of the sculptor’s later works was his tombstone for Ye. Kurakina. The mourning woman lying on the sarcophagus seems to have fallen asleep in tears, her head resting on her crossed arms. The complicated foreshortening and the intense restless rhythm in the heavy folds of her garments enhance the impression of tragedy. The sincerity and depth of the weeper’s suffering are utterly convincing in this statue, and at the same time her figure is marked by majestic power and inner energy. In this work Martos rose to the heights of real monumental art. As one of his contemporaries put it, the sculptor could make the marble ‘weep’.

Martos’s skill and prodigious output rank him among the greatest artists of his time. There was barely a single important commission for sculptural work in which he did not participate. He did stucco decorations for the palaces at Tsarskoye Selo (now the town of Pushkin) and Pavlovsk, and modelled a statue of Actaeon for the Grand Cascade at Peterhof.

At the beginning of the nineteenth century building was begun on the Kazan Cathedral in St. Petersburg, and Martos was one of the artists who decorated it. His contribution included the bas-relief on the Biblical theme of the wandering of Jewish people (Moses Divines Water in the Wilderness) on the attic of east wing of the colonnade, and the statue of John the Baptist, situated in a niche of the portico. The bas-relief exemplifies Martos’s excellent understanding of the relationship between a decorative relief and the architecture of a building as a whole. The great length of the composition required mastery in the construction of the figures, and the sculptor coped perfectly with the difficult task of conveying the array of emotions and inner states of people racked by thirst.

Martos achieved true fame as a result of his monument to Minin and Pozharsky in Moscow. His work on this monument coincided with the war of 1812, and with the resulting rise of patriotism and national awareness in the country. The idea of raising a monument to these heroes of seventeenth-century Russian history came considerably earlier, however. In 1803 Vasily Popugaev, one of the active members of the Free Society of Lovers of Literature, Science and Art (the most progressive educational organisation of the time), proposed that a nationwide subscription be raised and that the money thus collected be used to erect a monument to the ‘Russian plebeian’ Minin and Prince Pozharsky. Martos set about this work with great enthusiasm. ‘Which of the celebrated heroes of olden days,’ he wrote, ‘has surpassed the courage and exploits of Minin and Pozharsky?’ In his conception, which became clear even in the first sketches, Minin and Pozharsky were to form a unified group, joined by the emotions and patriotism. Admittedly, their standing figures—with their cloaks blowing and rather affected gestures—were still theatrical and pompous. Later sketches stressed the importance of Minin, his activity and steadfastness, ‘Here Minin was the main active force,’ wrote S. Bobrovsky, one of the members of the Free Society of Lovers of Literature, Science and Art.

In 1808 the government ran a competition, in which Martos was challenged by other sculptors such as Shchedrin, Prokofiev, Demut-Malinovsky and Pimenov. But Martos’s design won first place. Compared to his sketches, in which the images of the heroes still showed traces of melodrama and the composition lacked unity, the monument in its final form is austere and solemn. The two figures are closely linked not only emotionally but also compositionally. Minin immediately draws the viewer’s attention because of his purposefulness and fervour; his image is at once restrained and full of tremendous inner power and activity—a combination achieved by the powerful modelling of the figure. Both the broad, sweeping gesture of his right hand, pointing towards the Kremlin, and his expressive vertical stance affirm the dominating position of Minin in the composition. Pozharsky is also full of resolution and readiness to undertake a great feat. Accepting the sword from Mi-nin’s hand, he rises a little from his seat, ready to follow him. Pozharsky’s face is inspired, bearing traces of recent sufferings but at the same time courageous. In their outward appearance, Martos emphasised their typically Russian national features, successfully combining elements of classical and Russian dress in their costumes.

The monument was originally erected near the Arcade (Gostinny dvor) opposite the Kremlin wall. Its unveiling in 1818 was a major event. ‘During this grand ceremony,’ wrote the newspaper Moskovskie vedomosti, ‘the concourse of people was incredible: all the shops, the roofs of the Gostinny dvor . . . even the Kremlin towers were covered with people anxious to enjoy this new and unusual spectacle.’

In this work the artist managed to express ideas and feelings that concerned wide sections of the Russian public. The figures of these heroes of Russian history were perceived as contemporaries and their exploits were reminders of the events of the recent war against Napoleon.

Meanwhile, Martos had done several other works, quite diverse in character. In 1812, for example, he made a statue of Catherine II, and in 1813 he drew sketches of the four evangelists for the Kazan Cathedral. The sculptor’s creativity continued to flourish in the years to come. Besides teaching at the Academy of Arts, in the 1820s he produced several large monumental works: monument to Paul I in Gruzino, to Alexander I in Taganrog (1828-31), to Richelieu in Odessa (1823-28) and to Lomonosov in Arkhangelsk (1826-29). Documents have revealed that Martos also worked on a monument to Dmitri Donskoi but this project appears never to have been completed.

The artist’s capacity for work was impressive. ‘I cannot be idle,’ he wrote. Those who knew Martos remarked upon his industry, selflessness and extreme modesty. In a report to the Minister of Public Education, the president of the Academy Olenin wrote of him: ‘In his modesty Martos has never burdened the government with requests on his own behalf, and he receives wages from the public purse no greater than many pupils of his pupils receive.’

Martos lived a long, industrious life, wholly given over to the service of art.