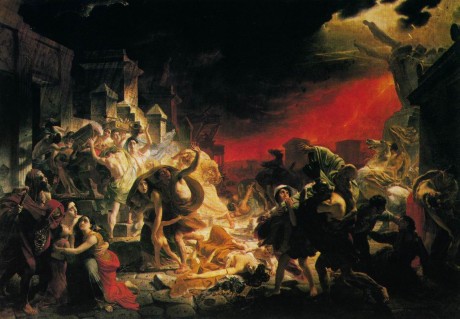 Karl Bryullov was a son of academician of or­namental sculpture Pavel Bryullov. He was bom in St. Petersburg and at the age of nine be­came a pupil at the Academy of Arts, where his older brothers were already enrolled.

Many leading artists of the time—A. I. Iva­nov, A. Ye. Yegorov, V. K. Shebuyev—noticed Bryullov’s rare abilities at an early age. Accord­ing to one of his friends he left the Academy with ‘handfuls’ of awards and all the minor and major silver medals. His teachers were not at all pleased, however, by those of the young artist’s works which violated the strict academic rules.

A competition painting Narcissus Admiring His Reflection in the Water (1819, RUSSIAN  MUSEUM, SAINT PETERSBURG), for ex­ample, was judged to show ‘reprehensible fanta­sy’, and the young Bryullov was blamed for de­picting a classical character against a non-classi­cal background. Moreover, the artist had ‘upset’ the purity of the ideal form by ‘daring’ to show a shadow from one of the trees falling on Narcis­sus’ leg. But, supported by his teacher A. I. Iva­nov, Bryullov did receive a second-class gold medal and, consequently, the chance to com­pete for a first-class gold one (The Appea­rance of Three Angels to Abraham by the Oak of Mamre, 1821, RUSSIAN  MUSEUM, SAINT PETERSBURG).

In August 1822 Karl and his brother Alexan­der set off for Italy as beneficiaries of the newly founded Society for the Encouragement of the Artists. The road to Rome took them via Riga, Berlin, Dresden, Venice, Padua and Bologna. The artists had been warned by special instruc­tions against the revolutionary feelings that were ripening in Russia and had seized France and Italy, and also against becoming too keen on the ‘low genre’, i. e. genre painting. In addition, they were instructed as to which of the theorists had to be followed: the list inc­luded Leonardo da Vinci, Vazari, Raphael, Winkelmann, Mengs and Visconti. 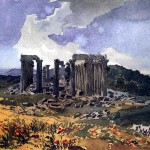 The Temple of Apollo the Epicurean 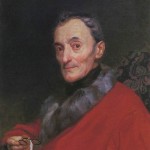 Portrait of M. A. Lanchi 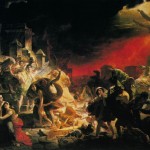 The Last Day of Pompeii 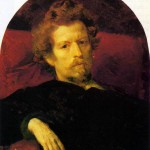 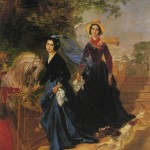 Portrait of the Sisters O. A. and A. A. Shishmareva 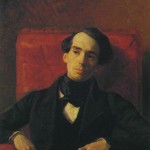 Portrait of A. N. Strugovshchikov 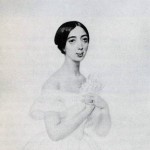 Portrait of the Singer Pauline Viardot

Bryullov’s work in Rome commenced with a study of Raphael’s Vatican frescos and antique sculpture. What appealed to him in the work of the great painters of the past—Raphael, Titian, Rembrandt—was their verisimilitude. ‘The first thing I acquired on the trip,’ he wrote to his elder brother Fyodor, ‘was a realisation of the pointlessness of mannerism.’

Notwithstanding the Society’s warnings, Bryullov applied himself avidly to genre painting, and produced his Italian Morning (1824, whereab­outs unknown), Girl Picking Grapes in the Envi­rons of Naples (1827, RUSSIAN  MUSEUM, SAINT PETERSBURG) and Italian Midday (1827, RUSSIAN  MUSEUM, SAINT PETERSBURG). All these pictures are full of the joy of living. Bryullov saw beauty in the profusion of sensations in life, in the immediacy of human feelings, in simple, everyday things. His view of the tasks of art manifested itself clearly in Italian Midday. A young Italian woman is plucking a bunch of grapes amid dense greenery. The gentle outline of her head, shoul­ders and arms, the colour on her cheeks and the dazzle of her moist eyes all sparkle with the joy of existence, with a full-blooded awareness of life and with a sense of being at one with nature. The sun’s rays pierce the foliage of the vineyard, flitting over the girl’s arms, face and clothes; the atmosphere is one of a vital link between man and nature.

The old aesthetic canons were shaken in their foundations. The Society for the Encouragement of Artists was obliged to remark to Bryullov: ‘Your model was of pleasant, rather than of ele­gant proportions . . . the aims of art in general must be to portray reality in its most elegant form.’ To which Bryullov replied: ‘… the artist has the right to deviate from conventional beau­ty of forms and to seek variety in those simple natural forms which are often even more pleas­ing to the eye than the austere beauty of stat­ues.’

Bryullov’s striking talent, good education and independent outlook (cf. his break with the So­ciety for the Encouragement of Artists and his refusal to wear the Order of Vladimir, which he was awarded by Nicholas I) attracted the atten­tion of his contemporaries. It is not surprising that his studio on the Via Corso in Rome was a popular meeting-place.

The artist’s most important work was The Last Day of Pompeii (1833, RUSSIAN  MUSEUM, SAINT PETERSBURG) which dealt with the tragedy of Roman city that perished when Vesuvius erupted (first century A. D.).

Bryullov took six years to complete this can­vas, having studied documents relating to the destruction of Pompeii, Pliny’s letters to Tacitus and other historical and archeological materials, and also having visited the excavations at Her­culaneum and Pompeii.

The action in the picture develops swiftly and occupies an enormous area. The whole city is in confusion; the deep-red sky tom by cold arrows of lightning, the sharp contrasts of light and shadow, and the running people, even now, in this tragic moment of their lives, are classically beautiful. Bryullov succeeded in conveying the most valu­able thing in people—love of one’s neighbour.

Current events troubled the artist. He was acutely aware of the anxious, often tragic life around him, in which people inspired by worthy ideals crossed swords with the forces of reaction and perished. The destruction, confusion and dynamism of this painting all mirrored an age which the writer Nikolai Gogol styled ‘an age of crises felt by everyone’.

But Bryullov had not yet broken with the tra­ditions of classicism . . . Idealisation of nature, canonical positioning of the figures, convention­al light and colour—all this is present. But the new is making startling inroads—as seen in the mass character of the scene, in the absence of the obligatory main hero, in the dynamic quality of the picture as a whole and, most important, in the artist’s interest in man’s inner world and his desire to show the complexity of feelings.

In the autumn of 1833 Bryullov opened the doors of his studio, and soon The Last Day of Pompeii began its triumphant tour of exhibi­tions all over Europe, from Rome and Milan to Paris and St. Petersburg. Its success was enor­mous.

Gogol wrote about the painting: ‘His figures are beautiful, for all the horror of their position.’ Pushkin went into ruptures over the artist and dedicated a poem to him. The head of the Ital­ian art school Vincenzo Camuccini declared Bryullov a ‘colossus’ of an artist. Sir Walter Scott, who visited his studio, called his creation an epic. Bryullov was elected honorary member of the Academies of Milan, Bologna, Florence and Parma. In Paris he was awarded a gold medal. The painting was greeted ecstatically by progressive circles in Russia: among those who appreciated their fellow-countryman’s talent were Lermontov, Baratynsky, Zhukovsky, Be­linsky, Herzen and Glinka.

Before returning to his homeland to take up a post as professor at the Academy of Arts, Bryullov set off on an ‘artistic expedition’ with V. P. Davydov to Greece, Turkey and Asia Minor. A master of drawing, sepia and water­colour, Bryullov produced a suit of studies of Greece.

On the invitation of Grigory Gagarin, a representative of the Russian Embassy in Con­stantinople, Bryullov sailed to Constantinople on the brig Themistocles, captained by the later famous Admiral V. A. Kornilov. The water­colour portrait of Kornilov and the Greek landscape are among the best examples of Bryullov’s graphic art.

On 25 December x835 the artist returned to Moscow, and in May 1836 he went to St. Peters­burg. Pushkin, with whom Bryullov made friends in Moscow, wrote to his wife: ‘Bryullov is with me now. He is going to Petersburg, reluctantly, afraid of the climate and of being tied down.’

His life in St. Petersburg was not easy or independent. His professorship at the Academy degenerated into an official ‘service’, always un­der the eye of the tsarist Court, with commis­sions for church icons and portraits of the tsar’s family, and with the difficult work on the histori­cal canvas The Siege of Pskov (Osada Pskova) which turned, as he put it, into ‘distress from Pskov’ (Dosada Pskova).

But his friendship with Pushkin, Zhukovsky, Krylov and Glinka, and his acquaintanceship with Gogol, Belinsky, Lermontov, Baratynsky and Dargomyzhsky, helped him on to new suc­cesses.

Self-Portrait, painted when he was ill, is a kind of autobiography of the artist.

In the spring of 1849 Bryullov went abroad for the sake of his health. He died on 23 June 1852 in the village of Marciano near Rome.