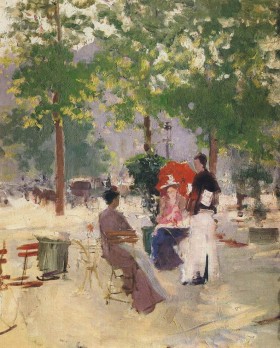 Konstantin Korovin was born into a well-to-do merchant family. At fourteen he entered the architecture department of the Moscow School of Painting, Sculpture and Architecture, where his elder brother Sergei—later a well-known realist painter—was already a student. By this time the family had run into hard times: ‘I was extremely hard-up,’ wrote Korovin, recalling his student years, ‘and at the age of fifteen I was giving drawing lessons and earning my bread.’

After two years of study, having submitted landscapes painted during the holidays for as­sessment, Korovin transferred to the painting department. His teacher there was Alexei Sav- rasov, who laid great stress on painting from na­ture and helped his pupils appreciate the beauty of the Russian countryside. Later, Korovin remembered Savrasov’s exhortations: ‘When you set about painting, paint etudes, study, and most importantly—feel!’

Under Savrasov’s influence, Korovin was soon strongly drawn towards landscape-paint­ing. Even as a student, trying to preserve the freshness of the impression, he used to put the finishing touches to his works at the actual sites of the landscapes he was painting. In paintings such as The Village (1878, Kharkov State Museum of Fine Arts), Early Spring (1870s, TRETYAKOV GALLERY, MOSCOW) and A Little Bridge (1880s, TRETYAKOV GALLERY, MOSCOW) close observation of nature is combined with direct perception of it. 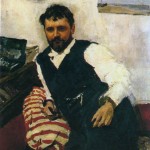 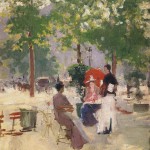 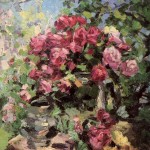 To complete his education, Korovin went to St. Petersburg and entered the Academy of Arts, but within three months he left, disappoin­ted by the outdated teaching methods, and returned to Moscow. In his last years at the School he studied under Vasily Polenov, who attached particular importance to artistic form.

Fame came to the young artist with his Por­trait of a Chorister (1883, TRETYAKOV GALLERY, MOSCOW), with its impression of plein-air. The woman’s face, dress and hat are flooded by gentle, dispersed light, marbled by the reflection of green trees. With its unconstrained brushwork and shining colours, the portrait is a fine achievement, and it should be remembered that it was painted five years earlier than Serov’s Girl with Peaches and A Girl in the Sun.

Polenov introduced Korovin to Mamontov’s Abramtsevo circle, which included the Vasne­tsov brothers, Ilya Repin, Vasily and Yelena Po­lenov, Mark Antokolsky, Ilya Ostroukhov and others. The Abramtsevo circle’s fascination for Russian themes is reflected in Korovin’s picture A Northern Idyll (1886, TRETYAKOV GALLERY, MOSCOW): the folklore ele­ment and smooth rhythmical composition of this picture call to mind the works of Viktor Vasnetsov, whom Korovin admired.

In 1885 Mamontov set up his private opera house and Konstantin Korovin designed the stage decor for Verdi’s Aida, and the next season for Delibes’ Lakme and Bizet’s Carmen. Mamontov wrote about the production of Aida: ‘Korovin’s sets were marvellous, especially the “moonlit night on the bank of the Nile” and the “doorway of the temple” in which the trial of Radames took place.’

Korovin used the money he earned at the the­atre to go to France and Spain. His impressions of Spain found expression in the best of his ear­ly genre paintings The Spanish Girls Leonora and Ampara on a Balcony (1889, TRETYAKOV GALLERY, MOSCOW), in which the national motif is interpreted with good taste and a feel for the local colour.

In the best of Korovin’s portraits, man and nature merge together, the beauty of each com­plementing the other. The excellent portrait of Tatiana Lyubatovich (c. 1886, RUSSIAN  MUSEUM, SAINT PETERSBURG) brings out the poetic nature of the well-known singer. The artist coped admirably with a complex task here: the woman is seated with her back to a win­dow, with a lush green background, wearing a white dress and holding a book in her hands; her bearing is simple and natural; the creeping vio­let and rose-coloured patches of sunlight on her dress lend her figure a light, delicate quality.

The artist’s subsequent work was strongly influenced by his trips to the North. During his travels of 1888 he was captivated by the panora­mas of the stern northern coastlines, as seen in The Coast of Norway and The Northern Sea (private collection, Leningrad).

His second trip to the North, with Valentin Serov in 1894, was occasioned by the construc­tion of the Northern Railway. Korovin captured the beauty of these parts in a large number of landscapes: NorwegianPort, Saint Trifon’s Brook in Pechenega, Hammerfest: Aurora Borealis, The Coast at Murmansk (all in TRETYAKOV GALLERY, MOSCOW) and others. The colouring of the landscapes is especially fine, many of them being built on a delicate web of shades of grey. The ‘etude style’ of these works was characteristic of Korovin’s art of the 1890s.

Using material from this trip, Korovin de­signed the Northern Railway pavilion at the All- Russia Exhibition of 1896 at Nizhny Novgorod. On huge panels he created broad, generalised images of the life and scenery of the North.

The decoration of the pavilion was so success­ful that Korovin was designated head artistic de­signer of the Russian pavilions at the World Ex­hibition in Paris in 1900. The immensity of this task drew out the best of his talent, and he paint­ed several large decoratively coloured panels. For this work Korovin received a gold medal at the Exhibition. He now enjoyed worldwide renown and his works were exhibited in many European cities.

From the start of the twentieth century Koro­vin focussed his attention more and more on the theatre. His move from Mamontov’s private opera to the public Mariinsky Theatre in St.Pe- tersburg allowed him to work on a larger scale. His designs revolutionised the art of theatrical decoration. Departing from the traditional type of decor, which merely indicated the place of ac­tion, Korovin produced ‘mood decor’, which conveyed the general emotional tenor of the performance.

Korovin designed sets for some of Stanislavs­ky’s drama productions, but his scenery for oper­as and ballets enjoyed the greatest success. His colourful costumes and scenery for such productions as Faust (1899), The Little Hump­backed Horse (1901) and Sadko (1906) greatly increased the artistic expressiveness of the productions.

A colourist by nature, Korovin made colour the principal means of expression both in his theatrical work and in his easel painting. ‘Col­ours and form combine to give harmony of beauty,’ he wrote. ‘Colours can be a celebration for the eyes, and your eyes speak to your soul of joy and delight… Colours, chords of colours and forms—that is what I was trying to achieve in my stage-sets for the ballet and opera.’

In the first decade of this century Konstantin Korovin showed great interest in painting Paris by night and by evening, with the bright lights of advertisements and dashing carriages: A Paris at Night; Le Boulevard Italien (1908, TRETYAKOV GALLERY, MOSCOW), Night Carnival (1901, Latvian State Art Mu­seum, Riga), Paris in the Evening (1907, private collection) and others.

Korovin knew western painting well and ad­mired the achievements of the Impressionists. This influenced his own work—especially the Paris series, in which he brilliantly records impressions of the city’s bright, colourful, changeable life. In the evening twilight or in the morning haze, his colours lose their concreteness and form a system of vibrat­ing patches, and objects become less clearly defined. Yet in Korovin’s best works, as well as conveying an emotional state, he also gives objects an almost tangible material quality.

Konstantin Korovin’s pupil B. Johanson wrote the following about his teacher: ‘Unusually emotional and impatient to act, he quickly burned with enthusiasm about everything that fell under his painter’s eye—snow thawing on the banks of the Istra, a girl in a white dress beside a lilac bush, roses in the sun against the blue sea, a remote corner of a provincial town, Venice or Tashkent, Arkhangelsk . . . or the night lights of Paris … In everything he found the poetry of truth . . . His greatest joy was the fascinating process of battling with nature, at the end of which a new, second life, enriched by the artist’s poetic feeling, would emerge on the canvas.’

Throughout his career Korovin displayed his works at exhibitions of the peredvizhniki, the ‘World of Art’ (For more details about this society see biography of A.N. Benois) society and the Union of Russian Artists (This society, which has leanings towards Impressionism, was founded in Moscow in 1903, and Korovin played a leading role in it). From 1901 Konstantin Koro­vin taught at the Moscow School of Painting, Sculpture and Architecture; many Soviet artists studied under him.

During the First World War Korovin worked as a camouflage consultant at the headquarters of one of the Russian armies. Despite his poor state of health (an old nervous illness and heart- disease) he was often at the front line.

After the Revolution he led an active artistic life; apart from being involved with the task of preserving art treasures and organising auctions and exhibitions for the benefit of released political prisoners, he continued to work in the theatre, designing productions of Wagner’s Die Walkiire and Siegfried and Tchaikovsky’s Nutcracker ballet (1918-20).

Apart from being incurably ill himself Koro­vin had an invalid son who could be treated only in Paris, and on the advice of the People’s Com­missar for Education Lunacharsky, he moved to the French capital. Here an exhibition of his works was to have taken place, but his pictures were stolen and the artist was left penniless. He was forced to agree to any kind of work. Under these circumstances Korovin signed various shackling agreements and in a short period, for a negligible fee, painted forty pictures of a ‘souve­nir’ type—countless ‘Russian winters’ and ‘boul­evards of Paris’. The rich colours and sweeping style that had marked much of his earlier work now became almost excessive. Indicative of his continuing interest in Russian music and culture was his scenery for a production by the Turin Opera House of Rimsky-Korsakov’s The Gold­en Cockerel. In the last years of his life he worked fruitfully in many of the major theatres of Europe, America, Asia and Australia.

The artist Konstantin Yuon had this to say about his work: ‘Korovin’s painting is the embodiment in imagery of the artist’s happi­ness and joy of living. All the colours of the world beckoned to him and smiled at him.’