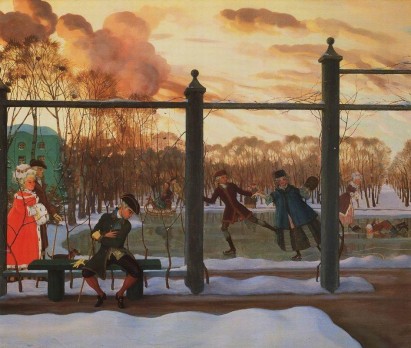 Konstantin Somov was born in St. Peters­burg. His father, Andrei Somov, was curator of the StateHermitageMuseum, Saint Petersburg, editor of The Fine Arts Herald and a connoisseur of painting and etching.

Ever since he was a child Konstantin Somov dreamed of becoming a painter. After receiving a general education in K. I. Mai’s private grammar-school, he entered the Academy of Arts, where from 1894 till 1897 he studied under Ilya Repin. In February 1897, not having graduated from the Academy, Somov left for Paris, but in the autumn of 1899 he returned and settled in St. Petersburg for a long time.

While still at grammar-school, Somov had been friendly with Alexander Benois, V. Nuvel and D. Filosofov, and later with Sergei Diaghilev—the founders of the ‘World of Art’ society.

The ‘World of Art’ was a heterogeneous or­ganisation with contradictory ideological prin­ciples, like many other artistic groups which sprang up at the turn of the century. For Somov the most important and precious thing in paint­ing was the ‘cult of beauty’, which was associat­ed with a contemplative attitude to the world, and especially to the world of things. He ob­served life from a kind of artificially created ‘realm of beauty’. He merely ‘admired’ life, as a fine connoisseur of antiquity and a man of highly developed taste. 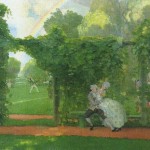 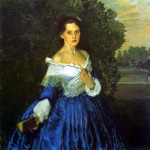 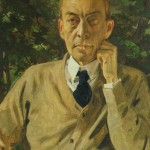 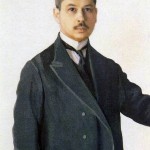 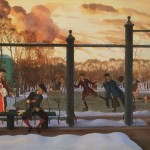 As Repin’s pupil he revealed various sides of his talent. He was keen on portraiture, rejoiced in elegant lines and was sensitive to the beauty of nature. He painted charming harlequins and eighteenth-century ladies amid bosquets, and in these small, elegant works there emerged a cu­rious world of the past.

‘I vividly remember my feeling of astonish­ment, and then delight,’ wrote Anna Ostroumo- va-Lebedeva, ‘when he showed me a study he had done on a subject set by Repin—“Beside a Pond”.’ A lady in eighteenth-century coiffure and dress was standing with her back to the viewer in front of an open-work railing, feeding swans. There was an impression of tremendous refinement in the combination of the colours, an impression of great freshness, delicacy and sick­liness.’

The early work In August (1898, where­abouts unknown) portrays lovers sitting at a pond. Their figures are quite still. The scenery around them is cold and inhospitable. A strong wind is bending the branches and foliage of the trees and one feels that the next blast will carry the whole lot off into the distance. The land­scape and figures are shown in such an unusual aspect that an impression of unreality emerges, of a phantasmal dream, of whimsical fantasy. The picture gives rise to a feeling of alarm and plaintiveness. There is a clear kinship here with the poetry of the Symbolists.

Perhaps without realising it completely him­self, Somov looked at the things around him with bitter irony, and there was a cruel truth in this irony. In contemporary life he felt the spirit of Philistinism. As S. Yaremich points out: ‘. . .Somov is by nature a powerful realist, akin to Jan Vermeer or Pieter de Hooch, and the drama of his position lies in the dichotomy that affects every great Russian painter. On the one hand he is attracted by life, as the most valuable and delightful thing, and on the other hand the discrepancy between life in general and the artist’s own life draws him away from the pre­sent into other, more distant spheres, where the artist is left to his own devices.’

The artist creates his own ‘Somovian’ world. His small canvases show ladies in rosy and silvery silks and crinolines, tired and lost in dreams. Lovers talk in whispers, pass secret notes and steal kisses. Somov feasts his eyes on this life and at the same time treats such ‘toy’ emotions with irony.

In the picture Echo of Past Time (1903, TRETYAKOV GALLERY, MOSCOW) we see an elegant lady in a dress like a foaming wave and a gossamer head-dress. She sits in a rather artificial pose and resembles a doll with large motionless eyes and finely outlined eye­brows and lips. Her pallid cheeks, puffy eyelids and dry parchment skin betray old age. Outside the balcony door it is sunny and scorching, but in the depths of the shady room there is cold, dampness and decay. Echo of Past Time is not irony, but bitterness and sadness.

Anguish and morbidity are even more promi­nent features in his ‘Harlequinade’ series (Fire­work, Pierrot and Columbine, Harlequin and Lady). The critic S. Ernst wrote of Somov: ‘His art gives off a sharp odour of falling roses and decay.’

When Somov turned to portraiture he was de­monstrably the pupil of Repin and a worthy contemporary of Serov. From Repin he in­herited the ability to show the highly indi­vidual, unique characteristics of a man through gesture, pose and expression, but in his inter­est in the workings of the mind he was closer to Valentin Serov. In the words of Alexander Benois, ‘Somov’s series of portraits will tell as fully and truthfully about our age as do the drawings of Holbein and the pastels of La Tour about theirs’.

In the famous picture-portrait Lady in Blue (1900, TRETYAKOV GALLERY, MOSCOW)—of the artist Ye. Martynova, who died at an early age—Somov achieved great psychological depth. The young woman stands, deep in thought, with a book in her hand, against a decorative landscape. Her gentle, deli­cately featured face, fragile shoulders and graceful hands are painted with careful, smooth brush-strokes. Ye. Martynova’s appearance has the charm of youth and intellect; her captivat­ing womanliness is intermingled with oversen­sitivity and inner tiredness.

Somov’s portraits are a striking page in the development of twentieth-century realist art. And not only his portraits, but his landscapes too. Whether it is his blazing Camp-Fire or his suite of the seasons (Autumn, Spring, Summer, Rainbow in Summer)—all are lyrical and ro­mantic: the combination of decorativeness and a filigree graphic quality adds to the generalised, sometimes symbolic imagery. Benois and Os­troumova-Lebedeva remarked upon Somov’s intricate technique and ornamental skill, and other of his contemporaries were delighted by his decorative sense of colour.

Somov’s work displayed features that were very typical of the age—an age which Sergei Diaghilev, one of the organisers of the ‘World of Art’, understood and assessed with great preci­sion: ‘We live in a terrible time of change; we are condemned to die in order that the new cul­ture, which shall take from us what remains of our weary wisdom, should live. History says so, and aesthetics confirms it. We are witnessing the greatest historical moment of stock-taking and ending, for the sake of a new, unknown culture.’

Somov’s art reflected the complexity and sharp contrasts of the age. Apart from works which manifested his oversensitivity and ten­dency to hide from the surrounding world, he produced brilliantly painted portraits and land­scapes; they will always remain landmarks in Russian realist art of the turn of the century.

Konstantin Somov died in Paris in 1939.