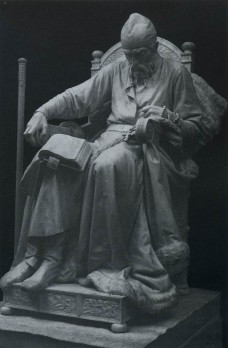 The greatest Russian sculptor of the second half of the nineteenth century, Mark Antokols­ky, was born into a large Jewish family of mod­est means. At nights, instead of resting after his exhausting work in the tavern where he helped his father out, he would give himself up to his fa­vourite occupation—moulding or cutting out little figures. The rest of his family found this hobby of his rather unusual, but still he was later sent to work as an apprentice with a wood-cutter. In 1862 he became an external student at the St. Petersburg Academy of Arts.

In the capi­tal Antokolsky mixed with the leading repre­sentatives of Russian culture—Shishkin, Vas­netsov, Kramskoi, Stasov, Serov, Mussorgsky —and became a friend of Repin’s. He studied in N. S. Pimenov’s class, and after his death under the engraver and sculptor 1.1. Reimers. His first high reliefs—Jewish Tailor (1864, RUSSIAN  MUSEUM, SAINT PETERSBURG) and Jew­ish Miser (1865, RUSSIAN  MUSEUM, SAINT PETERSBURG)—which were awarded with second-class and first-class silver medals respectively, already displayed the artist’s ten­dency towards realism. The critic Stasov wrote: ‘None of our sculptors has ever tried to do this kind of thing before; they had no time for such trifles as life and truth, they had to soar some­where above the clouds, in allegories . . . But now it would be a great fortune for our sculpture if Mr Antokolsky’s example did not fall on stony ground.’ (That reflects the critic’s negative attitude to Russian classicism which, as we can see, has pro­duced some brilliant works of plastic art; in the heart of polemics Stasov, while rightly advocating closeness to reality, is too sharp in opposing Anto­kolsky to previous Russian sculptors. — Ed.) 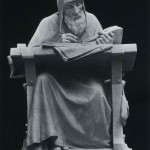 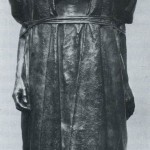 Christ Judged by the People 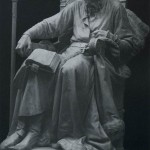 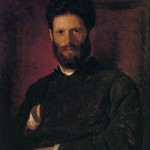 The psychological qualities of these first genre works were not lost when Antokolsky turned to a historical subject in the high relief The As­sault of the Spanish Inquisition on Jews Secretly Celebrating the Passover (1869, TRETYAKOV GALLERY, MOSCOW).

The first major landmark in Antokolsky’s work was the statue Ivan the Terrible (1871, bronze, RUSSIAN  MUSEUM, Saint Petersburg; marble, TRETYAKOV GALLERY, MOSCOW; plaster, Kensington Museum, London), which was shown at the First Peredvizhniki Exhibition. This image of a ‘tormentor and martyr’, as Antokolsky called Ivan the Terrible, was clearly influenced by the progressive trends in Russian art and literature. The work had a tremendous impact. The Acad­emy awarded the sculptor the title of academi­cian, and he was spoken of as a master whose spectacular arrival in the sphere of Russian art was ‘a consequence not of great talent alone, but of a large heart and an original mind’. Devoid of conventional rhetoric, the statue of Ivan the Terrible is a dramatic, realistic expression of ‘a mighty spirit before which the whole Russian land trembled’. The sculptor put his heart into this work—‘every cut, every stroke I did with trepidation’—and this shows in the finished work, in the tsar’s attitude, gesture and appear­ance. Nonetheless, the actual form, which the sculptor wanted to ‘speak in a terse and power­ful language’, looks a little dry and diffuse both in marble and in bronze—a fact which naturally impairs the wholeness of the image itself. The success of the work was understandable, how­ever, both because of its evident merits and the tastes of the period, and, it seems, because it was precisely this conception of the ‘terrible’ tsar that prevailed in the public of the time.

Antokolsky’s triumph was quite exceptional. Crowds of people besieged the Academy, where the statue was on display. Ivan Turgenev and Vladimir Stasov wrote enthusiastically in praise of the sculptor.

In 1871, after graduating from the Academy, Antokolsky’s ill health forced him to go abroad, to Rome and Paris, and from then on he only oc­casionally returned home. But his thoughts and affections were always with Russia. ‘My whole soul belongs to the country in which I was born and to which I am accustomed,’ he wrote to Stasov. ‘In the North my heart beats harder. I breathe deeper there and am more sensitive to all that goes on there. That is why wha­tever I do will always be the result of those heartfelt impressions that Mother Russia im­bued me with.’

On his arrival in Rome Antokolsky began work on a statue of Peter the Great which he had planned while still in Russia. It is an integrated, energetic work, embodying both the character of the great reformer and the age of progress in Russia which ‘came of age with the genius of Peter’. The statue served as a model for monuments in Taganrog and Arkhangelsk; a smaller version is kept at Peterhof; and it is represented by bronze copies in the Tretyakov Gallery and the RUSSIAN  MUSEUM. A compari­son of these almost contemporaneous works — Ivan the Terrible and Peter the Great — clearly illustrates the sculptor’s ability to find different artistic means to embody personalities representative of two critical periods in Russian history.

At the same time as working on the statue of Peter the Great, Antokolsky produced studies for equestrian statues of Yaroslav the Wise, Dmitri Donskoi and Ivan III, which were to be erected on the Alexandrovsky Bridge over the Neva and would have formed a kind of ‘sculp­tural gallery’ of major Russian historical fig- ures.The plan was never realised, however, as the architectural draft was not approved. This work marked the end of what may be regarded as the first period in the sculptor’s development. Now Antokolsky was drawn to new characters and heroes. ‘From now on,’ wrote Stasov, ‘dra­matic power, effervescence, emotion and en­thusiasm were absent from his works. The for­mer stormy activity of his heroes disappeared and was replaced by benign passivity—though full of poetry, humanity, peace of mind and indignation at evil and falsity.’

The first of these new heroes was Christ Judged by the People (1874, bronze, RUSSIAN  MUSEUM, Saint Petersburg; marble, TRETYAKOV GALLERY, MOSCOW). In the sculptor’s own words, his Christ conformed to ‘the image we have of him in the nineteenth century’. It is no coincidence that other artists such as Kramskoi, Ghe and Polenov also treated the image of Christ. In An­tokolsky’s interpretation (about which he often spoke in his letters to Vladimir Stasov, ex­cerpts from which are cited below) the image of Christ is linked not so much with the accepted religious legend as with the moral problems of past history and contemporary life. The un­derlying idea—that of self-sacrifice—was per­meating the sculptor’s work more and more. But in contrast to the active images of Repin and Yaroshenko—images of ‘active resistance’, as it were (e.g. Repin’s Refusal to Confess and The Arrest of a Propagandist, Yaroshenko’s Lithuanian Castle and The Prisoner)—the lead­ing idea in Antokolsky’s work is one of a martyr’s estrangement and doom. Christ’s ap­pearance contains both silent reproach and the conviction of a preacher. At the same time, he is outwardly calm, and this is the true power of elevated feeling that penetrates the inmost recesses of the human soul. It was such ‘difficult simplicity’ that Antokolsky was aspiring to in this image: ‘In the statue I wanted to create quietness and profundity, outer simplicity and inner depth . . .’

For all their differences in character, most of Antokolsky’s heroes share a common striving for truth, sometimes at the cost of their own lives. Such, for example, are Socrates’ Death (1875, marble, RUSSIAN  MUSEUM, SAINT PETERSBURG) and Spinoza (1882, marble, RUSSIAN  MUSEUM, SAINT PETERSBURG). As an antithesis to this, as early as 1874 the sculptor conceived the idea for a statue of Mephistopheles. His Mephistopheles, earlier called The Nineteenth Century (1883, marble, RUSSIAN  MUSEUM, Saint Petersburg; smaller copy in marlbe, TRETYAKOV GALLERY, MOSCOW) is not so much the embodiment of all evil as the personification of tormenting doubt and scepticism; the sharp, angular forms and sarcastic face lend the image great expressiveness.

In the seventies Antokolsky also worked in the genre of memorial sculpture. One of his most moving works was a gravestone for M. A. Obolenskaya at the MonteTestaccioCeme­tery in Rome (1874; plaster model in Scientific-ResearchMuseum of the Academy of Arts). The sculptor was shaken by the death of a girl whose intelligence and virtue he valued highly, and the memorial expresses his strong, sincere emotions.

Antokolsky attached great importance to portraiture. In June 1873 he wrote to Stasov from Rome: ‘… I should like to make busts of all the outstanding people there are in Rus­sia … I am sure that such busts could be of much more value to posterity than all those monuments that are put up in squares: they are all false and mannered …’ Among those whose portraits he did were Vladimir Stasov (1873, marble, in the Saltykov-Shchedrin Pub­lic Library, Leningrad), Ivan Turgenev (1880, tinted plaster, RUSSIAN  MUSEUM, SAINT PETERSBURG), Mikhail Saltykov-Shchedrin, A. Polovtsev, Sergei Botkin and Savva Ma­montov.

In the eighties Antokolsky returned to his­torical subjects. Inspired by the image of Pushkin’s Pimen, he produced the statue Nes­tor the Chronicler (1889, marble, RUSSIAN  MUSEUM, SAINT PETERSBURG). In 1891 he did two more pieces—Yaroslav the Wise (majolica, RUSSIAN  MUSEUM, SAINT PETERSBURG) and the bronze statue Yermak (RUSSIAN  MUSEUM, SAINT PETERSBURG). Both characters are seen as people who determined the future of Russia. While Yaroslav, though outwardly calm, is full of intense, searching thoughts, Yermak is in all respects a dynamic figure: weighed down by his heavy armour, a pole-axe in his strong hand, the legendary subjugator of Siberia steps out decisively. ‘I wanted him to be a lively, powerful expression of Russian daring and bravery,’ the sculptor wrote to Stasov.

In 1893 the St. Petersburg Academy of Arts mounted a wide-ranging personal exhibition of Antokolsky’s works. But many of them re­mained misunderstood and he was subjected to blatant attacks by ill-disposed critics in the press. Despite Stasov’s support, the sculptor took it badly and left St. Petersburg in a state of depression.

The sculptor died in June 1902 while in Ger­many. He was buried in St. Petersburg, in the Preobrazhensky Cemetery.