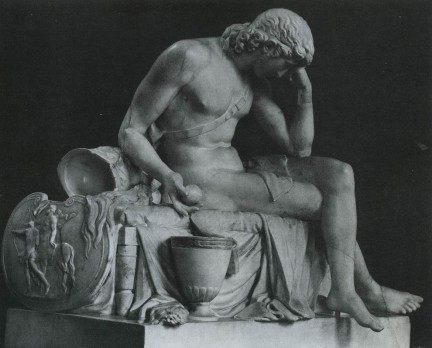 Though an artist of great versatility, it was particularly in sculpture that Mikhail Kozlovsky made a name for himself.

He was born into the family of a military musician. The boy’s precocious talent for drawing prompted his parents to send him to the Academy of Arts. Here he entered the sculpture class and was taught by Nicolas Gillet, a French artist who trained many talented sculptors of that time. Apart from sculpture which he attacked with great enthusiasm, Kozlovsky was also very keen on drawing, and when it came to choosing which to specialise in he vacillated for a long time.

In 1772 Kozlovsky was awarded a first class gold medal for his programme bas-relief Prince Izyaslav in the Field of Battle (plaster, in the Scientific Research Museum of the Academy of Arts), the theme of which was taken from Russian history. Here he succeeded in creating a dynamic scene: the characters’ poses are full of expression, their gestures are exaggeratedly emotional. The artist had not at this stage achieved the severe, restrained style which was to characterise his mature period.

Winning a Grand Gold Medal for his diploma work The Return of Svyatoslav from the Danube (1773), Kozlovsky graduated from the Academy of Arts and set off for Italy to continue his education. His horizons were widened, and his work profited, by the knowledge he gained here of works of classical art and by his close study of canvases by Renaissance artists. Of the works he completed in Rome, however, apart from some drawings done with enormous verve and perfection, nothing has come down to us. In 1780 the Marseilles Academy of Arts awarded him the title of academician—a fact which testifies to the popularity of his works abroad. 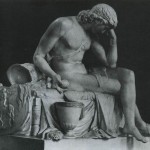 The Vigil of Alexander of Macedon 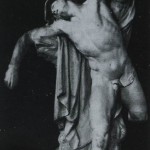 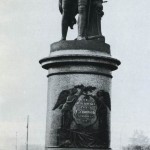 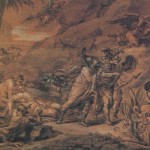 On his return home, Kozlovsky worked on the decoration of many architectural monuments : bas-reliefs, for example, for the Concert Hall at Tsarskoye Selo (architect: Giacomo Quarenghi) and for the MarblePalace in St. Petersburg (architect: Antonio Rinaldi). He also made a marble statue of Catherine II, represented as Minerva (1785, RUSSIAN  MUSEUM, SAINT PETERSBURG). It is an idealised, majestic image of the empress and legislatress. Catherine liked the statue and Kozlovsky obtained permission to travel to Paris ‘to further his knowledge in his art’.

In 1790 inParis the sculptor fashioned his statue Polycrates (RUSSIAN  MUSEUM, SAINT PETERSBURG). The theme of man’s striving for freedom which this work expressed, reflected the revolutionary events in France which Kozlovsky witnessed. The master portrayed the most intense moment in the sufferings of Polycrates, bound by the Persians to a tree. Never before had the sculptor attained such expressiveness and drama in conveying complex human feelings, or such forceful imagery. He was aided in this by his excellent knowledge of anatomy and by working with models.

In 1794 Kozlovsky was made an academician ; later ‘in recognition of his talents’, he was appointed professor, and in 1797—senior professor. His importance as a teacher at the Academy was extremely great. As an excellent graphic artist and a sensitive, attentive teacher, he commanded love and respect all around. A whole series of talented young sculptors emerged from his studio, including S. Pimenov, I. Terebenev and V. Demut-Malinovsky.

In the late 1780s and 1790s the sculptor was at the peak of his talent. At this period he was attracted by the heroic themes full of patriotic fervour. In 1797 he carved the marble statue Yakov Dolgoruky Tearing Up a Royal Decree (RUSSIAN  MUSEUM, SAINT PETERSBURG). It is significant that the artist took his theme here from recent Russian history. He was drawn by the image of Peter the Great’s associate, who was not afraid to tear up an unjust tsar’s decree—which laid impossible burdens on the impoverished peasantry—in the tsar’s presence. The figure of Dolgoruky is full of determination and steadfastness. His face is angry and stern. His right hand holds a torch, his left the scales of justice. At his feet are a dead serpent and a mask—symbols of treachery and pretence.

Kozlovsky also took subjects from the Homeric epics and Roman history. An important place in his art is occupied by his work on the figure of Alexander of Macedon (1780s, RUSSIAN  MUSEUM, SAINT PETERSBURG). In the statue The Vigil of Alexander of Macedon the sculptor represented an episode from the training of the future leader’s will. The young man’s body is handsome and perfect, his movements nimble and smooth. The silhouette of the statue is well thought-out, with distinct, expressive contours.

Kozlovsky based a series of sculptored and graphic studies on Homer, the most successful of which was the marble statuette Ajax Protects the Body of Patrocles (1796, RUSSIAN  MUSEUM, SAINT PETERSBURG) on the theme of manly friendship and devotion. The tense movement of Ajax’s figure, his broad stride and the vigorous turn of his head all reveal his resolution and willpower. The scene derives a sense of drama from the contrast between the lifeless immobility of Patrocles’ body and the strong muscular Ajax.

Almost all of Kozlovsky’s later works were marked by a spirit of heroism and valorous struggle. In the bronze group Hercules on Horseback (1799, RUSSIAN  MUSEUM, SAINT PETERSBURG), this was a symbolic expression of the military genius of Suvorov. The outstanding general is represented as the young Hercules, astride a galloping steed, and this figure is expressive and imposing. In a sense, this group was a preliminary stage in the sculptor’s work on his masterpiece—the monument to the great Russian general Alexander Suvorov.

It was with great zeal that Kozlovsky embarked on this project in 1799. The sketches now kept in the RUSSIAN  MUSEUM testify to the long, complex search that led to the final solution. Only in the final versions did the artist arrived at the idea of representing Suvorov as the ‘god of war’ with a sword and shield in his hands. In order to glorify the strength and courage of the Russian general, Kozlovsky resorted to allegory, creating an idealised, generalised image of a warrior. It contains no concrete features of Su-vorov’s own personality, for the whole point of the monument was to express the general’s bravery, resoluteness and inflinching will. He is caught in the middle of an energetic but restrained movement, swiftly, lightly taking a step forward. He holds a sword high, in readiness to strike. With his shield he protects the crown and the papal tiara. His head is turned sharply to the side, and his open, youthful, proud face speaks of his unruffled courage. Seen from the front, the statue is marked by solemnity, tranquility and monumental clarity. From the right the warrior’s attacking movement is particularly striking, while the viewer on the left is most clearly aware of the figure’s firmness and confident power. The pedestal, designed jointly by Kozlovsky and A. N. Voronikhin, is a harmonious part of the overall conception: the solid rhythmically proportioned form of the round granite column is in marked contrast to the light, graceful figure of the hero.

The monument was unveiled on 5 May 1801, on the Field of Mars in St. Petersburg, not far from The Engineers’ Castle. In 1820, due to the reconstruction of the buildings on the Field of Mars, it was moved to the embankment, to the square named after the Russian general. The Suvorov monument marked the apex of Kozlovsky’s career, and its construction was the greatest event in Russian artistic life of the period.

Another of Kozlovsky’s finest achievements, and one of the most beautiful decorations of the fountains at Peterhof, was his Samson, the central statue of a sculptural ensemble jointly constructed by many of Russian’s best sculptors—Shubin, Martos, Shchedrin, Prokofiev, Gordeyev and others. But the most important of those involved was probably Kozlovsky, whose work provides the compositional key to the sculptural complex of the Grand Cascade. Once again the artist resorted to symbolism: Samson personifies Russia, while the lion represents defeated Sweden. This allegorical imagery was understood by everyone in the eighteenth century. Samson’s mighty figure is shown in a complex twisted position, full of tensity and motion.

Kozlovsky’s Samson is one of the world’s finest pieces of decorative sculpture. The ensemble of the Peterhof fountains, destroyed by the Nazis in the Second World War, has now been restored. And it is adorned once again by the statue Samson Rending the Lion’s Jaws—a copy of Kozlovsky’s work, made in 1947 by the Leningrad sculptor V. A. Simonov.

Kozlovsky’s last works were gravestones, full of heartfelt sorrow, for P. I. Melissino (1800) and S. A. Stroganova (1802, ‘Necropolis, of the Eighteenth Century’, the Leningrad Museum of Town Sculpture).

The sculptor’s life came to an abrupt end just as he had reached the peak of his talent. He died on 18 September 1802 at the age of forty-nine.