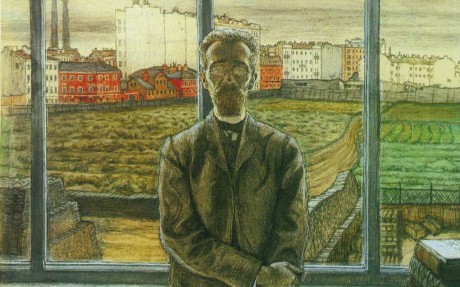 Mstislav Dobuzhinsky belonged to the mag­nificent cluster of artists which formed around the ‘World of Art’ society at the turn of the cen­tury. As a graphic artist and theatrical designer, Dobuzhinsky was one of the most important members of the group.

He was born in Novgorod. His father was an artillery officer, later a general, and his mother — a graduate of the St. Petersburg Conservatoire — was an opera singer in provincial theatres.

The artist spent his childhood in St. Peters­burg. The family library was extensive, and Mstislav’s father, who himself was fairly compe­tent at drawing, taught his son to illustrate the books he read. The boy was particularly keen on history books. Gradually drawing changed from a childhood pastime into a veritable passion, and even before he went to grammar-school Mstislav went to drawing lessons at the Society for the Furtherance of the Arts for two winters running.

His father’s work entailed frequent changes of abode, and the family lived by turns in Kishi- nyov, Vilno, Tambov province, on the Volga and in the outskirts of St. Petersburg. The young Mstislav drew a great deal and his powers of ob­servation developed. In 1895 he began studying in the Law Faculty of St. Petersburg University, and at the same time tried to get into the Acade­my of Arts. Although his drawings were singled out by Repin, however, he was not accepted for the Academy. While at university he studied history of art on his own and attended classes at the private studio of Dmitriev-Kavkazsky. Do- buzhinsky’s drawings appeared in student ma­gazines. It was also while still a student that he decided to see something of the world and trav­elled to Germany and Switzerland. He made up his mind to study abroad, and after graduat­ing from university in 1899 he set off for Mu­nich, which was then—together with Paris—the leading artistic centre in Europe. Dobuzhinsky studied at the famous A. Azbe school and then transferred to S. Hollosy’s studio. Many other Russian artists—Grabar, Kardovsky, Kravchenko, Favorsky, Braz and Narbut, to name but a few—also perfected their professional skills in the Munich studios, some earlier, some later. 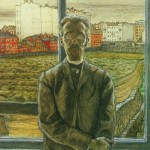 A Man in Spectacles 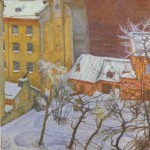 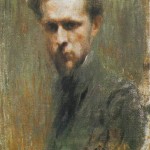 Dobuzhinsky’s early leanings towards graph­ic art were quickly spotted, and when he re­turned to Russia he was advised by Igor Grabar to study etching under Professor V. Mate at the Academy. But these classes were presently cur­tailed, and Dobuzhinsky did not take up engrav­ing again until 1918.

In 1901 Dobuzhinsky joined the ‘World of Art’, which by then had got over its period of or­ganisational difficulties. He was its youngest and least experienced member, but he quickly be­came a celebrity. Typical of Dobuzhinsky’s art of this period are his town landscapes: views of Vilno, Tambov, Novgorod, Rostov-on-Don and, of course, St. Petersburg. For open letters put out by the St. Eugene Community, he produced a series of drawings depicting the archi­tecture of St. Petersburg from the eighteenth and early nineteenth centuries. In other land­scapes Dobuzhinsky emphasised another aspect of the city’s life: behind the eye-catching fa­cades hide gloomy courtyards with faceless symmetrical windows; instead of picturesque colonnades and porticos we see thick fire-proof walls. Dobuzhinsky became known as the ‘artist of the city’.

A Man in Spectacles (1906, TRETYAKOV GALLERY, MOSCOW) is one of the artist’s most frank utterances about his contem­poraries. The man stands before a window through which a city landscape is visible. His face is impenetrable and his stance immobile, but his inner concentration can be felt and a sense of reticence and loneliness arises.

The public-spiritedness of Dobuzhinsky’s art clearly found expression during the events of the 1905-07 revolution, when he published a series of biting political cartoons in the journals Bugbear and Infernal Post. One of the most ex­pressive drawings was Appeasement, which showed Moscow drowned in a sea of blood. At this period Dobuzhinsky and other members of the ‘World of Art’ set up satirical periodicals, in which he called upon artists to work for the peo­ple.

After 1910 the artist travelled a lot—in the Scandinavian countries, Germany, Holland and Italy. As before, he drew many urban land­scapes. In Amsterdam he did a study—Peter the Great in Holland (1910)—which echoed Serov’s picture Peter the Great.

Dobuzhinsky’s Province of the 1830s (1907- 09) is similar in mood to Gogol’s novel Dead Souls: the provincial backwater depicted here was symbolic, in the artist’s eyes, of officialdom in Russia under Nicholas I.

From 1907, Dobuzhinsky attached consider­able importance to working in the theatre. His collaboration with the MoscowArtTheatre, for which he designed twelve productions, was very fruitful. One of his best sets was for Stanislavs­ky’s production of Turgenev’s A Month in the Country in 1909. With excellent stage-sense and knowledge of life, he recreated the unhur­ried rhythm of life on a country estate. In his scenery for a stage version of Dostoyevsky’s The Possessed Dobuzhinsky underlined the dramatic qualities and intensity of the author’s fictional characters.

Dobuzhinsky left pencil portraits of Stanis­lavsky and the actors at the ArtTheatre, which are exceptionally apt in their psychological cha­racterisation. The artist benefited greatly by the many years he worked with Stanislavsky; and as for the producer’s opinion of Dobuzhins­ky: ‘One could hardly wish for a better painter,’ he said.

Another sphere in which Dobuzhinsky ex­celled was book-illustration. His pen illustra­tions for S. Auslander’s story The Night Prince (1909) subtly convey the unsteady, semi-fantastic nature of the plot. Gradually his illustrations made fuller use of contrasts and shaded patches. In his drawings for Pushkin’s Lady into Las­sie (1919) he employed the silhouette tech­nique which was so popular in Pushkin’s days. The book was conceived by Dobuzhinsky as an organic combination of all graphic elements, subordinated to a single idea and a single emo­tional framework. The same features were seen in one of the artist’s best works—his illustra­tions for the Hans Christian Andersen tale The Swine-Herd (1917). Dobuzhinsky also desig­ned head-pieces, illuminated letters, types, publishers’ marks and book-plates—all execut­ed with great virtuosity and skill.

At the time of the October Revolution Do­buzhinsky was already a mature master, well- known both at home and abroad. He took an ac­tive part in designing the early revolutionary festivals, worked in the theatre and taught. His album of lithographs Petrograd in 1921 shows the austerity and coldness of the city during this difficult period.

Dobuzhinsky’s illustrations for Dostoyev­sky’s short novel White Nights (1923) are fine examples of Russian graphic art. The Peters­burg landscapes are particularly expressive, conveying both the mood of the novel and its heroes’ solitude and pure emotions. With a mi­nimum of pen-work the artist manages to get across the ghostly luminescence of the sky and its reflection on the cobbled streets; he achieves a classical harmony of black and white, of subtle calculation and sincere emotion.

In 1924 Dobuzhinsky went to live in the homeland of his forebears, Lithuania. From now on most of his successes were linked with the theatre. He designed sets for more than seventy productions, the best of them Russian and world classics: Tchaikovsky’s The Queen of Spades and Eugene Onegin, Mussorgsky’s Boris Godu­nov, Mozart’s Don Giovanni, Shakespeare’s Hamlet and King Lear. In 1927 he made studies of scenery for Gogol’s The Government Inspector; here he returned to a familiar theme —provincial Russia of the 1830s—but this time a gentle smile gave way to satire and the gro­tesque.

The new Soviet literature appealed to Dobu­zhinsky as a book-illustrator, and in 1929 he illustrated Yury Olesha’s Three Fat Men.

Starting in 1939, Dobuzhinsky worked in the Mikhail Chekhov Theatre in America. His scen­ery for Mussorgsky’s and Prokofiev’s operas at this time showed great originality and skill. In 1941 he collaborated with the outstanding Rus­sian choreographer M. Fokine on a ballet entitled The Russian Soldier, which was dedicated ‘To the Russian Soldiers of the Second World War’. Fokine, with whom the artist worked for many years in Diaghilev’s theatre, based the libretto of the ballet on Yury Tynyanov’s story Second Lieutenant Kizhe, and used music by Prokofiev.

A year later Dobuzhinsky wrote a ballet libretto to the music of Shostakovich’s Seventh (Lenin­grad) Symphony, designed scenery for the bal­let, and also produced illustrations to Shosta­kovich’s music.

Towards the end of his life Dobuzhinsky returned to the theme of the city which had inspired his art for so long.