Nikolai Yaroshenko was born in Poltava. His father, a highly educated man, was a military officer who had advanced to the rank of major- general, his mother was the daughter of a retired lieutenant. The boy’s propensity for drawing was clear at an early age, but in keeping with the family tradition his father wished him to have a military career and sent him at the age of nine to the Poltava cadet corps.

Drawings that have been preserved give reason to believe that the young artist studied diligently and not without success under his teacher I. K. Zaitsev. After finishing the cadet corps, in 1863, Yaroshenko moved to St. Pe­tersburg and entered the Pavlovsk military school, whence he was transferred to the Mi­khailovsky artillery school. His interest in art did not weaken, however: he studied privately under A. M. Volkov, an artist popular in the six­ties, and also attended evening classes at the drawing school of the Society for the Further­ance of the Arts, at which Ivan Kramskoi taught. In 1867 Yaroshenko entered the Mi­khailovsky artillery academy and at the same time became an external student at the Academy of Arts. Two years later he graduated from the military academy ‘with distinction in the sci­ences’, while continuing to make progress in art. 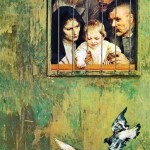 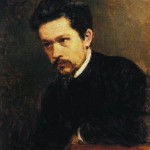 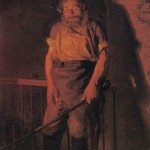 Yaroshenko’s world-outlook was directly influenced by the ideas of the Russian rev­olutionary democrats. His friend, the artist I. S. Ostroukhov, recalled that ‘Chernyshevsky and Dobrolyubov became his leaders, and the progressive journals his favourite reading- matter’. At the Academy he mixed with the peredvizhniki and the writers grouped around the progressive journal Otechestvennye Zapiski (Fatherland Notes). All this left its mark on the social orientation of Yaroshenko’s art. In 1875 several portrait etudes and his first picture, Nevsky Prospekt at Night (which perished dur­ing the Second World War), were displayed at the Fourth Peredvizhniki Exhibition. The latter showed St. Petersburg’s main street on a rainy night, empty apart from two women whom poverty had driven out to walk the streets. ‘The picture’s meaning lies in the colours,’ wrote Yaroshenko, ‘which show the dampness and the cold drizzle outside—in a word, weather which no decent master would put his dog out in.’

On 7 March 1876, on the strength of this pic­ture, Yaroshenko was unanimously elected member of the Society of Peredvizhniki, and soon he was made a member of the board. For over ten years he and Ivan Kramskoi headed the Society, and after Kramskoi’s death Yaroshenko acted as his ideological successor, preserving the best traditions of the Society. Mikhail Nesterov wrote of Yaroshenko: ‘After Kramskoi’s death he was one of the most active leaders of the Society . . . His voice could be heard at the meetings and he was listened to as closely as Kramskoi used to be. Yaroshenko was modest, exacting towards himself, reserved yet firm. Gentle in appearance, he was rock-hard in spirit.’ His contemporaries called him ‘the artists’ conscience’.

Following the leading trends of the age, Ya­roshenko affirmed the positive hero in his work. Two pictures shown at the Sixth Peredvizhniki Exhibition in 1878—The Stoker and The Prisoner—evoked a broad public response.

The Stoker (TRETYAKOV GALLERY, MOSCOW) is the first vivid realistic im­age of a working man in Russian painting. The picture made a huge impression on the writer Vsevolod Garshin, who managed to convey this in his story Artists: here the idea is of the re­sponsibility of society for the monstrous exploi­tation of the working people. But the stoker de­picted by Yaroshenko is not only a victim: he is also the force engendered by capitalism and op­posing it.

In The Prisoner (TRETYAKOV GALLERY, MOSCOW) the artist expressed sympathy with the fighters for freedom and ex­posed the autocracy. The etude for the work was painted from Yaroshenko’s close friend, the writer Gleb Uspensky. Both of these works represented a step forward in the development of democratic realism in the seventies, and if

The Stoker was the first image of a worker in Russian art, The Prisoner was one of the first works of that period dedicated to the revolutionaries.

In his work of the early eighties Yaroshenko developed the theme of the revolutionary struggle of the Russian intelligentsia in the light of the new upsurge of social concern in Russia. The subject of The Lithuanian Castle (1881, not preserved) was linked with Vera Zasulich’s at­tempt on the life of the mayor of St. Petersburg. This event was conceived as a protest against the frightful conditions under which political pris­oners were kept in the LithuanianCastle. The police banned the painting from being shown at the Peredvizhniki Exhibition, which opened on the day Alexander II was assassinated. The art­ist himself was held under house arrest for a week and received a ‘visit’ from the Minister of Internal Affairs, Loris-Melikov.

At the same time as The Lithuanian Castle, another painting—The Old and the Young (1881, RUSSIAN  MUSEUM, SAINT PETERSBURG)—was exhibited. It reflected the conflict between ‘fathers’ and ‘sons’ which was on everyone’s mind at the time—the clash of two ideologies, one conservative, one rebellious.

Yaroshenko was married to a former student, M. Navrotina, and their ‘Saturday nights’ were attended by writers, artists, scholars and younger members of the intelligentsia. This helped the artist keep in touch with the burning issues of the time and reflect them in sharp psychological works which became a landmark in the development of Russian democratic painting.

An important place in Yaroshenko’s work belonged to portraiture. Considering it his so­cial duty to paint leading representatives of con­temporary society, he did more than a hundred portraits, mainly of intellectuals—progressive writers, artists, actors and so on. As a pupil of Kramskoi’s, he saw the portraitist’s task above all in cognising the subject’s psychology. In the words of his wife, ‘he could not paint people who were of no spiritual interest’.

It is interesting that Vladimir Stasov consid­ered Yaroshenko ‘principally a portraitist of the younger generation, whose nature, life and character he deeply understood and knew how to convey’.

The best known of the artist’s paintings of young people are A Student (1881, TRETYAKOV GALLERY, MOSCOW) and A Girl-Student (1883, State Museum of Russian Art, Kiev; another version in KalugaRegionalArt Museum). These are basically picture-portraits, whose prototypes were, respectively, F. A. Chirok, a pupil at the Academy of Arts, and A. K. Chertkova, who attended the Bestuzhev university courses for women.

Yaroshenko also painted psychologically pen­etrating portraits of Ivan Kramskoi (1876, RUSSIAN  MUSEUM, SAINT PETERSBURG), Gleb Uspensky (1884, Sverdlovsk Picture Gallery), Dmitri Mendeleyev (1885, The Men­deleyev Museum at LeningradUniversity), Ni­kolai Ghe (1890, RUSSIAN  MUSEUM, SAINT PETERSBURG) and Vladimir Korolenko (1898, not preserved), to name but a few. One of the best is that of Polina Strepetova (1884, TRETYAKOV GALLERY, MOSCOW), an actress who created striking scenic im­ages of the downtrodden Russian woman. The artist brilliantly brings out the spiritual beauty and strength of a woman who was endowed with a great civic conscience and who yearned for a free life. Kramskoi rated this portrait among the finest of the time and saw it as a universalised expression of the artist’s own ideas, ‘occa­sioned’ by Strepetova.

At the end of the 1880s one of Yaroshenko’s most popular works appeared—Life Goes On (1888, TRETYAKOV GALLERY, MOSCOW): the people languishing behind the barred window of the convict wagon are not, the artist seems to be saying, criminals but unfortu­nate victims of social reality.

In his last years, despite a grave illness, Yaroshenko travelled widely in Russia and abroad: he went to the Volga, lived a long time in the Caucasus, and visited Italy, Syria, Palestine and Egypt. Not long before his death he was working in the mining area of the Urals on etudes for a planned large painting depicting the life of the miners.

In 1892 Yaroshenko was promoted for excel­lent service to the rank of major-general. That year he was forced by ill health to move to Kis­lovodsk. The following year he retired from mil­itary service but continued his public activities and still displayed his works at Peredvizhniki Exhibitions. He was full of artistic plans, but they were cut short by his untimely death, caused by heart failure, on 25 June 1898.