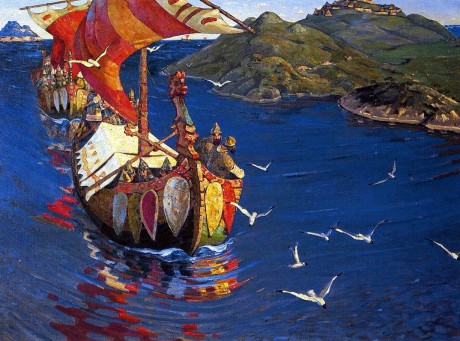 Nikolai Konstantinovich Roerich, an out­standing artist, scholar and public figure, was born in St. Petersburg. His ancestors, of Danish and Norwegian stock, had settled in Russia in the first half of the eighteenth century. His father, who owned a notary office, was a highly cultured man with a wide range of interests, and many leading scholars of the day were attracted to the Roerich household.

From childhood the future artist loved read­ing historical books and listening to ancient leg­ends, and dreamt of travelling. He developed a rich imagination and a keen interest in ancient Rus. During his years at the gymnasium he took part in archeological excavations, and it was also at this time that his talent for drawing became apparent.

On leaving the gymnasium in 1893, Roerich became a student both at the Academy of Arts and in the Law Faculty of the University. His interest in the mysteries of the past, however, continued to grow, and he also attended lectures in the Department of History. As a member of the Russian Archeological Society, he spent the summer months on excavations.

In 1895, after meeting Vladimir Stasov, who was at that time in charge of the art section of the Public Library, Roerich began a serious study of ancient books, manuscripts and deeds. 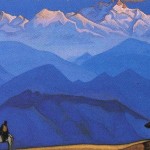 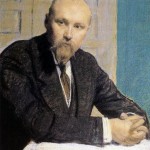 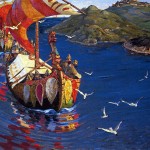 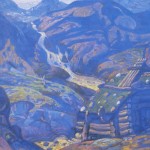 Roerich’s teacher, Kuinji, played an impor­tant role in shaping the young artist’s talent. In Kuinji’s studio Roerich began to paint land­scapes from nature, and also completed his first historical works. In 1897 he and Kuinji’s other pupils left the Academy as a sign of protest at the dismissal of their beloved teacher. He con­tinued working on a series of paintings based on the life of the ancient Slavs, which he entitled The Beginning of Rus; the Slavs.

The conception of this series was quite origi­nal. Roerich was not trying to recreate particu­lar historical events, and although he resurrects the past on the basis of scientific archeological findings, the essence of his work is not reconstruction of a past age, but its poetic embodiment. Characteristic of Roerich’s painting are his rich fantasy, his emotional perception of ancient times, and his ability to convey the spe­cial flavour of those times.

Idols depicts a pagan temple: behind a fence decorated with the skulls of sacrificed animals, in the midst of elaborate stone idols, an old sor­cerer is wandering, deep in thought; the world of Slavonic superstitions comes to life before us, and one can sense the atmosphere of ancient mysteries. The artistic idiom of this work is sig­nificantly different from Roerich’s earlier works, the novelty lying in its generalisation of form, precise outlines, and a complete, integrated composition.

The search for new imagery was particularly clear in the painting Merchants From Overseas, in which the artist’s talent as a colourist came into its own. The exultant colours of this pictu­resque work bring back to life the age of discovery of new lands. The Vikings’ long boats sail across a blue sea amidst green islands; a high wind fills the brightly-colou- red sails, and white seagulls swoop down to meet them with a loud cry. Here, Roerich reworked certain folk art techniques to pro­duce a highly decorative, colourfully har­monious and joyful work.

In the summers of 1903 and 1904 Roerich and his wife made a tour of ancient Russian towns, studying their architecture, painting, applied arts, folklore and traditional dances. This led to a series of ninety picturesque can­vases portraying monuments of old Russian archi­tecture. In these artistically subtle works one can feel the artist’s deep understanding of the style of ancient buildings and his enthusiasm for the inspired creations of ancient Russian mas­ters. At this time, too, Roerich published sever­al articles popularising old Russian art and ap­pealing for the preservation of Russia’s ancient national heritage.

In 1906 Roerich began work on an unusual series of paintings about human prehistory: The Stone Age (1910, whereabouts unknown), Coastal Dwellers. Morning (1906, Gorlovka Picture Gallery), The Forefathers of Man (1911, whereabouts unknown; later copy in RUSSIAN  MUSEUM, SAINT PETERSBURG). This latter painting is typical of the series. It depicts a young Slav playing on a pipe, and bears, en­chanted by the magical sounds, are peacefully settled on the green hills around him. In this se­ries Roerich gave symbolic expression to his philosophical outlook, which was linked to the ideas of the Enlightenment. He contrasts con­temporary society with a past idyll, where peo­ple were motivated by goodness and love, and lived in harmony with nature. Roerich believed that the key to the transformation of reality lay in man’s moral perfection, and that radiant, pu­rifying art could serve this goal.

Also at this time, Roerich painted a number of unusual historical landscapes which reflected his pantheistic conceptions of the ancient Slavs, who spiritualised nature and believed in mysti­cal powers which influenced man’s life. These paintings included The Herald (1914, RUSSIAN  MUSEUM, SAINT PETERSBURG), Astral Runes (1912, whereabouts unknown), Heavenly Battle (1909, England; copy 1912, RUSSIAN  MUSEUM, SAINT PETERSBURG). They are noteworthy for their emotional and poetic qualities, and for their interesting as­sociations with fairy-tale images.

In the pre-war years, works appeared with complex symbolic imagery, fantastic subject- matter, intense expressiveness and generalised artistic language. Such, for example, were The Serpent’s Cry (1913, PskovMuseum) and A Doomed City (1914, whereabouts unknown), in which there was a foreboding of the tragic events to come. The latter depicts a white city in the clutch of a giant fiery boa.

Of enormous interest are the sets which Roerich designed for the theatre, especially those for Meaterlinck’s play Sister Beatrice (1914), Ibsen’s Peer Gynt (1912), Rimsky- Korsakov’s opera The Woman of Pskov (1909) and Borodin’s opera Prince Igor (1914). Roerich brilliantly conveyed the national col­ouring and emotional atmosphere of each of these works. Particularly original and poetic was his design for Stravinsky’s ballet The Rite of Spring (1913), for which he also wrote the libretto, based on the life of the ancient Slavs.

Roerich also worked in the genre of monu­mental art, making sketches for the decoration of secular buildings and churches. His murals for the Church of the Holy Ghost in Talashkino (1911) are among his best.

He was sympathetic towards the revolution and joined the Arts Commission set up in March 1917 on the initiative and under the chairman­ship of Maxim Gorky. In May 1917, owing to a serious lung disease, Roerich went to the Kare­lian Isthmus, and in the spring of the following year, when the interventionists attacked Russia, he found himself abroad.

In 1918 Roerich travelled in Finland, Nor­way, Denmark and England with an exhibition of his works, and in 1920 he went to America, where his work was particularly well received. In America he made an effort to popularise Russian art, organised an ArtUniversity, an Artists’ Union, and ‘The Crown of the World’ International Art Centre, the aim of which was to foster cultural collaboration between the peoples of different countries. In 1923 aRoe­richMuseum was opened by a group of his admirers.

In that same year the artist left America and went to France via Italy and Switzerland. From France he sailed East, having made up his mind to realise a long-cherished dream—to make a tour of India and Central Asia. This unusual ex­pedition lasted for five years. Roerich’s group crossed the Himalayas and carried on into some of the most inaccessible areas of Central Asia; in May 1926 the travellers crossed into the Soviet Union and made their way to Moscow. Here, Roerich met the Minister of Culture Luna­charsky and presented the Soviet government with some of his works. The following summer the travellers went to the Altai mountains, then through Siberia into Mongolia and further across the GobiDesert, Tsaidam, Tibet, and back across the Himalayas to their starting point, the town of Darjeeling. They encountered many dangers and obstacles, and during a for­ced winter stop in the Tibetan mountains they nearly died of hunger and cold. But through­out the expedition Roerich continued to work, even in the most extreme conditions; the fruits of this trip amounted to some five hundred paint­ings and sketches. His scientific findings were also substantial: Roerich made a thorough study of the art, ancient manuscripts, rites, traditions and religions of all the areas he visited. In 1928, for the purpose of sorting out the collected material, he set up the Him­alayan Institute for Scientific Research in the KuluValley (Western Himalayas). In 1930, after a short visit to America, Roerich and his family settled permanently in the KuluValley, where he was visited by famous Indian artists and politicians.

The works which Roerich painted in India are extremely diverse in character. During the 1920s he worked on a cycle of paintings di­rectly linked to his study of ancient oriental philosophy and the problems of ethics. He painted portraits of those whom he consid­ered to be preachers of the eternal norms of mo­rality—Mohammed, Buddha, Christ, Confu­cius, Lao Tzu and others. Linked to this cycle are the religious paintings Compassion and Ma­donna of Work. The canvas The Advent of Time occupies a special place in his work. It depicts, on an enormous scale, a wise man’s head with features similar to those of Lenin. The artist thus connected his ideas about the liberation of the peoples of the East to the name of the leader of the Russian Revolution.

Roerich’s principal works during the last twenty years of his life, however, were land­scapes, which were as a rule suffused with a deep philosophical content. In them Roerich glorified the majesty and eternal, ennobling beauty of nature.

These works are executed in tempera, a tech­nique which allowed the artist greatest expres­sion for his artistic searchings.

In the cycle The Strongholds of Tibet Roerich harmoniously combined the landscape and the ancient architectural monuments of the East: cf. Lhasa (1942, RUSSIAN  MUSEUM, SAINT PETERSBURG), Stupa Ladak (1941, RUSSIAN  MUSEUM, SAINT PETERSBURG), Tibetan Monastery (1942, RUSSIAN  MUSEUM, SAINT PETERSBURG) and Royal Monastery; Tibet (1932, TRETYAKOV GALLERY, MOSCOW). Often the artistic monuments depicted by Roerich are connected with ancient superstitions, and have a symbolic meaning. An example of this is the series devot­ed to Maitreya, the Buddha of the future, who is destined to bring happiness to Earth. Typical of this series is the painting Maitreya the Conquer­or (1925, GorkyArt Museum), in which, be­sides the depiction of the deity hewn out of a rock, there is also a symbolic image—the silhouette of a horseman in the clouds. Roerich depicts the Indian gods Buddha and Krishna in a number of works.

Popular rites and ceremonies also interested Roerich. In one of his most poetic works, Lights on the Ganges (1945, RUSSIAN  MUSEUM, SAINT PETERSBURG), he depicts an an­cient method of fortune-telling. In the dark- blue light of dusk a woman sets fires floating on the water to tell her fate by their movements. In such works Roerich sensitively portrayed the lo­cal colour and way of life of a country that be­came very dear to him.

Roerich’s activities also extended into public life: he was a member of forty international cul­tural organisations. One of his most significant achievements was the famous ‘Roerich Pact’, the aim of which was to safeguard valuable monuments in the event of war. This led to the signing in the Hague in 1954 of the final act of the international convention on protec­tion of cultural values in case of armed con­flicts which was ratified by thirty-nine countries.

The artist died in India, and a monument was erected at the spot where he was cremated in the Kulu Valley with the inscription ‘Here, on 13 December 1947, was cremated the body of Nikolai Roerich, the great Russian friend of India’. Ten years later, his son Yuri came to the Soviet Union with a large collection of his father’s works, which the artist had bequeathed to his native land.