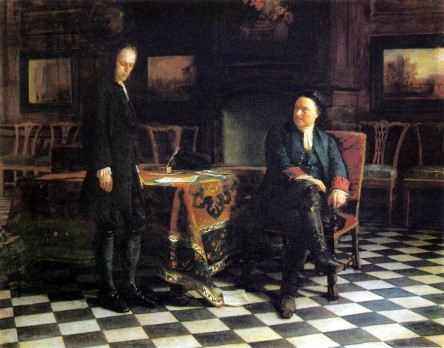 Nikolai Ghe was born in Voronezh. When he was three months old his mother died, and soon after his father, a retired officer, went with his family to Kiev and thence to Podolsk Guber­nia where he bought an estate. It was here that Ghe’s childhood was spent. He was brought up by his grandmother and a serf nanny. Even as a boy he had developed the kind, gentle nature which always attracted people to the artist.

From 1841 Ghe studied for six years in Kiev, at first at a private boarding-school, then at the grammar-school, and it was here that he began to take a serious interest in drawing. In 1847 he entered the mathematics department of KievUniversity and after a year transferred to St. Pe­tersburgUniversity. Two years later he left uni­versity and joined the Academy of Arts, firmly convinced of his vocation. While revering the Academy as a temple of art, however, he did criticise the academic methods of teaching. Among the professors, Ghe singled out Karl Bryullov, whose creative independence and de­sire to deviate from accepted canons he valued. He acclaimed Bryullov’s painting The Last Day of Pompeii, the influence of which can be dis­cerned in many of Ghe’s early works, includ­ing his diploma piece on a Biblical subject Saul with the Medium at Endor (1856, RUSSIAN  MUSEUM, SAINT PETERSBURG).

In this painting the artist depicted Saul col­lapsed in horror before the menacing shadow of the prophet Samuel, who has predicted death to the King of Israel. Ghe uses typical mid-century devices to convey the dramatic scene: exaggera­ted gestures, bright local colour. The picture demonstrates that Ghe had completely master­ed the Academy-approved methods of compo­sition, drawing and modelling of form. For this work he received a first-class gold medal and a scholarship to travel abroad. 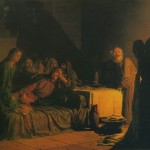 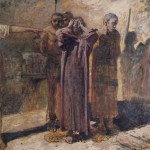 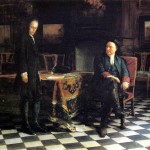 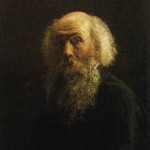 In 1857 the artist went abroad-to Germany, Switzerland and France, and then settled in Italy, where he became interested in classical history and drew several studies with very dra­matic plots: The Death of Virginia, The Love of the Vestal Virgin, etc. But soon he realised that the events and heroes he was depicting were alien to him. He became firmly convinced that an artist can paint ‘only what is really dear to him, only that which he holds sacred in his heart’.

Ghe got into his stride with the painting The Last Supper (1863, RUSSIAN  MUSEUM, SAINT PETERSBURG). The well-known Gos­pel story is reinterpreted here as a human dra­ma. Christ is portrayed deep in thought, tragi­cally shocked by the recreancy of one of his apostles. The other apostles are also perturbed; each is individually characterised—the noble, refined John and the rather coarse, tempera­mental Peter. The monolithic group of Christ and the apostles is contrasted with the solitary, sombre figure of the traitor Judas Iscariot, who is forsaking his former friends. The idea of the struggle between good and evil is not only ex­pressed in the composition. It is reinforced by the contrast of light and shade. At the same time, this contrast lends tension to the scene, with its ‘fiery’ colour-scheme based on the cor­relation of red and green. In The Last Supper Ghe picked up the philosophical and moral line in Russian art begun by Alexander Ivanov. Both artists were idealists. Both regarded Christiani­ty as the way to establish justice on Earth and as the path to man’s moral perfection. And both were interested in the moral aspect of the legend about Christ.

Nikolai Ghe had an unusual method of work­ing. He did not make preliminary sketches but pictured a whole scene at once in his mind and then looked for a model, transforming it to fit his plan. For Christ he used a photograph of Herzen; for John the wife of the artist A. P. Zabel posed; and Peter is modelled on the ar­tist himself (it is remarkable that at the age of 32 he saw himself as he was to become thirty years later).

The picture was given a hostile reception by the reactionary press while it was applauded by the progressive intelligentsia. Ilya Repin wrote: ‘Not only here in Russia but—I would go as far as to say—in the whole of Europe, in all periods of Christian art, there has never been anything on this subject to equal this picture. If it was interesting for the enlightened public, then it was even more instructive for artists because of its newness, its bold composition, its expression of a great drama and its overall harmony. This painting can happily be hung alongside the very greatest works of art.’ As a result of this work, Ghe was elected to the Academy of Arts.

After a short stay in St. Petersburg Ghe returned to Florence where he spent another six years working on subjects from the Gospels. The most impressive of these works were The Heralds of the Resurrection (1867, TRETYAKOV GALLERY, MOSCOW) and Christ in the Garden at Gethsemane (1868, RUSSIAN  MUSEUM, SAINT PETERSBURG).

In Italy the artist also painted a series of land­scapes, including Transportation of Marble (1868, RUSSIAN  MUSEUM, SAINT PETERSBURG) and Marble-Cutting at Carrara (1868, State Museum of Russian Art, Kiev). Both are characterised by the artist’s interest in reproducing light and air effects, by the purity and saturation of colour, and by the juxtaposi­tion of contrasting colours to convey bright il­lumination. However, Ghe regarded landscape as a subsidiary genre, essential for the study of nature but of no independent importance.

Several portraits also date from this period, notably of people who were close to Ghe: for example, Portrait of the Artist’s Wife and Son (1859, RUSSIAN  MUSEUM, SAINT PETERSBURG) and, of particular interest, a por­trait of Alexander Herzen (1867, TRETYAKOV GALLERY, MOSCOW). The por­trait of Herzen is painted with great sympathy for the writer, who was spiritually akin to the painter and highly regarded by him. It is a deeply psychological work with a simple com­position: Herzen’s brightly illuminated face stands out against a dark background. One is aware of a complex inner world, intelligence and subdued sadness. The artist smuggled the canvas back to Russia.

While living abroad, Ghe was well informed about artistic events at home. In 1867 he made the acquaintance of the artist Grigory Myaso- yedov and together they conceived the idea of a society of artists. In 1869 Ghe returned to Russia and, living in St. Petersburg, actively collaborated with Kramskoi in organising the Society of Peredvizhniki It was in this period that Ghe’s work came closest to the democratic realism of the peredvizhniki. This can be seen, for example, in his producing a painting on a subject from Russian history—Peter the Great Interrogates Tsarevich Alexei (1871, TRETYAKOV GALLERY, MOSCOW; facsi­mile by the artist in RUSSIAN  MUSEUM, SAINT PETERSBURG). In this psychological picture the drama unfolds purely through the characterisation of the protagonists. The action takes place in the MonplaisirPalace. At the table sits Peter, his resolute and wrathful glance turned on his guilty son, who stands before him, his head bent forlornly. ‘Anyone who has seen these two simple, ingenuously positioned figures,’ wrote Saltykov-Shchedrin, ‘must confess that he was a witness to one of those stunning dramas which can never be erased from the memory.’

In this painting Ghe displayed an understand­ing of the dialectical historical development of the struggle between the reactionary and the progressive. The drama of father and son out­grows the sphere of personal relations. By bring­ing together the world-outlooks of both, the artist exposed the meaning of that turbulent, critical age, and also linked the image of Peter with the vi­tal idea of his own time—readiness to sacrifice the personal for the sake of the interests of society.

Ghe strove to convey the historical atmo­sphere authentically and made a special journey to Peterhof, from where he, in his own words, ‘brought back the whole background of the pic­ture in my memory’. He studied the portraits of Peter and Alexei in the StateHermitageMuseum, Saint Petersburg and also legal documents relating to the case of the tsarevich. Such a method of working on a historical theme was new in Russian art, and Ghe became one of the founders of realist historical painting.

In the seventies and eighties the artist concen­trated mainly on portraiture, his aim being to record the outstanding figures of his time for posterity. He was interested not in the changing states of his models but in conveying their per­manent qualities. He was attracted by people in full possession of their faculties, people of intelligence and energy. The faces he painted were full of expression, the composition of his portraits was lucid and simple, the colouring austere: cf. for example, the portraits of Mikhail Saltykov-Shchedrin (1872, RUSSIAN  MUSEUM, SAINT PETERSBURG) and Lev Tol­stoy (1884, TRETYAKOV GALLERY, MOSCOW).

Later Nikolai Ghe came into disagreement with the peredvizhniki Like them, he conside­red protest against the ugly forms of reality and against the suppression of the human personality to be the basis of art, but the purpose of art was, for him, to express an ideal, perfection. Ghe saw the meaning of art in the fact that it could show ‘the difference between what we should be and what we are’. The truths promul­gated by art should, in Ghe’s view, be eternal, and not linked to a particular concrete circum­stance. In the sphere of form, too, Ghe’s searchings often proved incomprehensible to the peredvizhniki.

In 1875, due to material difficulties, Ghe left St. Petersburg for ever, and from then on he lived on a farm in Voronezh Gubernia. The last period in his art was devoted almost exclusively to themes from the Gospels. He sought more acutely expressive imagery and greater emotionality in his works.

In What Is Truth? (1890, TRETYAKOV GALLERY, MOSCOW), the philoso­phical meaning of the work—the eternal confiict between goodness and love, on the one hand, and callousness and indifference, on the other — is expressed more straightforwardly. The struc­ture of the painting rests on the outer contrast between the fat, self-satisfied Pilate and the tor­mented Christ, dressed in tatters.

The small work Golgotha is extremely power­ful in its expression of suffering. The expansive brushwork, the fragmentary composition, the generalised form and the sharp lines all contrib­ute to the heightened expressiveness of the ima­ge. In his final works Ghe paved the way to­wards the new art of the turn of the century.

In 1882 the artist met and became friends with Lev Tolstoy. The writer’s views, and his understanding of Christianity, largely coincided with those of Ghe. Ghe’s painting, however, was more or less unaffected by Tolstoy’s doctrine of ‘non-resistance to evil’. The active, passionate character of the artist’s work was not compati­ble with meekness and resignation. His works always protested against the suppression of the individual and expressed faith in man. He said, ‘I know nothing better than man and I shall al­ways believe: all my joy, my happiness, my knowledge—everything comes from people.’

Nikolai Ghe died in 1894 on his farm in Vo­ronezh Gubernia.