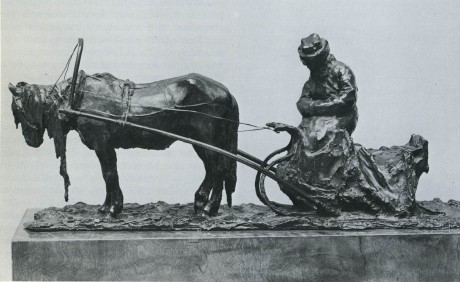 The turn of the century brought to Russian art a highly original master who created deeply psy­chological images in all the various forms of sculpture—from small-scale pieces to monu­mental works. Pavel Trubetskoi gained renown as a sculptor who showed a striking and poetic affinity with nature.

He was born on his parents’ estate near the Italian town of Intra, near Lake Maggiore. His father, Pyotr Trubetskoi, was a Russian prince, his mother was American. From the age of eight Pavel became interested in sculpture, and under the influence of his brother Pietro, a scene- painter, he made his first sculptures for a puppet theatre; two years later he attended classes with the artist Danielo Ranzoni. Serious lessons in sculpture began in 1884 inMilan, first at Do­nato Barcaglia’s studio, and then with Ernesto Bazzaro. Trubetskoi never, in fact, received a systematic artistic training, but his rare talent and willpower assured his success.

It was in 1886 that the young sculptor first dis­played one of his works—a statue of a horse—at an exhibition in the Italian town of Brera; there­after his works appeared at exhibitions in France and America. He sculptured portraits and small animal figures, and experimented in monument­al art. In 1891 he took part in competitions to design monuments to Garibaldi and Dante. 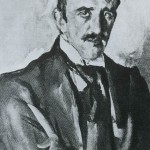 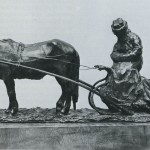 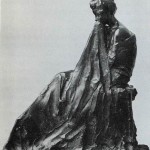 In 1897 Trubetskoi came to Russia, the homeland of his father. Inspired by new im­pressions, he began to work very intensively, and soon started teaching at the Moscow School of Art, Sculpture and Architecture.

The bronze sculpture A Moscow Cab Driver (1898, RUSSIAN  MUSEUM, SAINT PETERSBURG) was the first work he completed in Russia. It is a genre composition with an appar­ently traditional subject. Similar genre scenes were quite common in the work of the Russian sculptors Ye. A. Lansere and L. V. Posen. For Trubetskoi this work was an embodiment of his first Russian impressions, devoid of any ‘eth­nographic’ speculation, touchingly sincere, and with great plastic expressiveness in its gen­tle, flowing forms.

Trubetskoi’s exhibition works were sharply criticised in the conservative circles of the St. PetersburgAcademy, where his innovatory method was considered a violation of ‘classical’ canons; but they attracted the attention of lead­ing representatives of Russian society and of the artistic intelligentsia. He got to know such people as Ilya Repin, Isaak Levitan, Valentin Serov and Fyodor Chaliapin, and got on very well with Lev Tolstoy. In the words of V. A. Bulgakov, Tolstoy’s secretary, ‘The sculptor Paolo Trubet­skoi was one of Tolstoy’s favourites . . . He loved him for his simple, open heart, his upright­ness, his hatred of high-society conventions, his love of animals and his vegetarianism.’ Tolstoy willingly sat for Trubetskoi, and they had long conversations both in the sculptor’s studio and at the writer’s estate, Yasnaya Polyana.

His bust of Lev Tolstoy (1899, RUSSIAN  MUSEUM, SAINT PETERSBURG) and the statuette Lev Tolstoy on a Horse (1900, RUSSIAN  MUSEUM, SAINT PETERSBURG) are famous throughout the world. In them, the sculptor reveals the salient qualities in the char­acter of the great Russian writer: calmness and wisdom; intolerance of hypocrisy; simplicity and generosity.

In 1900 Trubetskoi’s works were displayed in the Russian pavilion at the World Exhibition in Paris. For his portraits of Tolstoy and L. Golit­syn and his Moscow Cab Driver Trubetskoi received joint first prize—the ‘Grand Prix’— to­gether with Auguste Rodin.

Between 1899 and 1909 Trubetskoi worked on a large-scale monument to Alexander III. For this purpose he was given a special studio- pavilion of glass and steel on Old Nevsky Pros- pekt, near the Alexander Nevsky Monastery. In the preparatory stages of this work, Trubets­koi made eight small-scale models, four life- size ones and two on the scale of the proposed monument.

Emerging in 1900 as winner of a competition for the right to create a monument to Alexander III, Trubetskoi paid little attention to the jury’s remarks about the structure of his monument. S. Witte in his Memoirs complained about the sculpture’s ‘unaccommodating character’. Tru­betskoi disregarded both this comment and that of the Grand Prince Vladimir Alexandrovich, who saw the monument as a caricature of his brother. The Tsar’s widow, however, who liked the portrait’s verisimilitude, allowed Trubetskoi to complete the work.

The monument is essentially different from most other monuments to Russian tsars in that the sculptor sought neither idealisation nor out­ward splendour. Ilya Repin very succinctly sum­med up the idea behind the work: ‘Russia, op­pressed by the burden of one of the most reactionary of tsars, has dug in its heels and refuses to go on.’

In the monument Trubetskoi embodied his creative credo: ‘A portrait should not be a copy. In clay or on a canvas I convey the idea of the person portrayed, that which I see as character­istic of him.’ Whether the words ‘I’m not interested in politics; I merely depicted one ani­mal on top of another’ were really spoken by Trubetskoi or not, the monument conveys the impression of a dull, crushing force. Alexander Benois remarked that this was a result ‘not merely of the master’s good fortune, but of his profound penetration of the task at hand.’

Even before the monument was unveiled, Trubetskoi could sense the hostility of many members of the tsar’s family and of high-rank­ing civil servants. Nicholas II wanted it removed to Irkutsk, ‘to send it into exile in Siberia, as far as possible from my offended filial eyes’, and to have another monument erected in the capital. S. Witte recalled that the sculptor did not even receive his invitation to the unveiling ceremony in time, and arrived too late in St. Petersburg.

Having fallen into disfavour with the authori­ties and having been deprived of the possibility of starting work on a new commission, Trubet­skoi went abroad.

Between 1906 and 1914, inParis, he made, sculptural portraits of Auguste Rodin, Anatole France, Giacomo Puccini and S. A. Muromtsev, and in London, one of George Bernard Shaw. However he continued to participate in compe­titions and art exhibitions held in Russia. Per­sonal exhibitions of his work were mounted in 1912 inChicago and Rome.

In 1914 Trubetskoi went to America, where he constructed monuments to Dante (San- Francisco) and General Otis (Los Angeles).

In 1921 he returned to Paris, and the last years of his life were spent in Italy. He carved a marble statue of the famous Caruso for the La Scala Opera House in Milan, designed a war memorial for the town of Brera, did a sculptured portrait of Gabriele D’Annunzio, a self-portrait for the Uffizi Gallery in Florence, and a portrait of one of the most famous Italian artists, Gio­vanni Segantini.

Although he spent a comparatively short time in Russia, Trubetskoi made an invaluable con­tribution to Russian art. His profundity, spirited forms and distinctive styles have had an enor­mous influence on the development of Soviet sculpture.