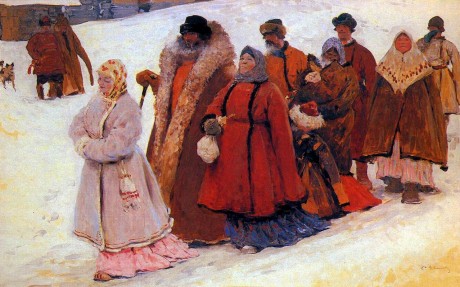 Sergei Vasilievich Ivanov was born in the town of Ruza in Moscow Gubernia into the fa­mily of an exciseman. The boy’s artistic leanings became apparent at an early age, but his father considered that he would never make an artist, or that at the most he might become ‘a sign-painter’. Discerning no difference between painting and drawing, he decided that his son should become an engineer, and sent him in 1875 to the Konstantinovsky Institute of Land Surveying. The Institute oppressed him, and on the advice of P. P. Sinebatov, a colleague of his father’s and an ‘eternal student’ at the Academy of Arts, in the autumn of 1878 he started study­ing at the Moscow School of Art as an external student. The following year he left the Institute and began full-time at the School of Art. In 1882 he entered the St. Petersburg Academy of Arts, and in 1883 completed his first painting Blind Folk (Ekaterinburg Art Gallery), which was the fruit of a journey to the Volga area. His interest in the way of life of peasant resettlers also undoubtedly dates from this time.

The direction of the young artist’s work is quite clear. He is interested in the life of the peasants, and in the last of the above-mentioned paintings his subject is a revolutionary. His artistic style is also taking shape; the most suc­cessful of these paintings from the point of view of expression and colour harmony is At the Jail. 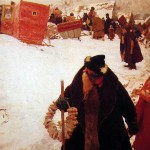 The Arrival of Foreigners in 17th- Century Moscow 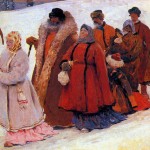 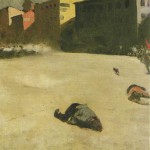 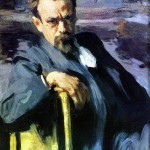 The theme of ‘resettlers’ was attracting the artist more and more; on obtaining permission from the Moscow Art Society to visit the dis­tricts between Moscow and Orenburg, he left the School without even a certificate qualifying him to teach drawing. From that time on Ivanov became a kind of chronicler of the tragedy that befell many Russian peasants after the reform of 1861, about which Lenin wrote: ‘The ruined, impoverished, hungry masses of. . . centre— the “heart” of Russia—rushed for resettle­ment.’

The well-known art critic Sergei Glagol says the following about this period in Ivanov’s life and work: ‘. . . Scores of miles he covered with the resettlers in the dust of the Russian roads, in rain and in the scorching sun of the steppe; many nights he spent with them, filling his al­bum with drawings and sketches; many tragic scenes passed before his eyes, and a series of pictures took shape in his head—an epic telling of the resettlement of the Russian peasantry.’

Ivanov’s pictures and drawings present horri­fying scenes from the life of the resettlers. Hope and despair, illness and death were the constant companions of those people wandering in the vast expanses of Russia. One of the most impressive is the painting Resettlers Returning (1888, Syktyvkar, The Komi ASSR Art Mu­seum), in which one is made acutely aware of the tragedy of the peasants’ position. The fate of one of these unfortunate people—in the paint­ing On the Road. The Death of a Resettler (1889, TRETYAKOV GALLERY, MOSCOW)—is presented as the logical outcome of an inconsolable situation.

The next chapter of Ivanov’s social epic was the ‘prisoners series’, work on which coincided to some extent with the ‘resettlers cycle’; it was at this time that the artist painted his Uprising in the Country (1889, Museum of the Revolution). Consequently, various aspects of the lives of the Russian people at that time became connected in the mind of the artist as links in the same chain: poverty and lack of rights ‘on the land’, all the burdens of resettlement, jails, exile, and finally the peasant uprising. It is clear that the artist did not consider the fugitives, convicts and prisoners a ‘band of robbers’, for he understood the social reasons which were the ultimate cause of people being sent to prison or into exile. Ivanov had no opportunity to meet the political prisoners who swamped the tsarist prisons, but he managed to discern the human soul even among criminals. When he got to know them a bit better, and spoke to many of ‘these dishonoured outcasts, with their shaven heads’, it became clear to him ‘that most of them, despite years of wandering from one prison to another, and from Russia to Siberia and back again, were neither vicious nor were they the dregs and parasites of society.’

With great expressiveness the artist conveys the state of mind of a fugitive peasant who has found his way to his own home, from which he will again have to flee to hide from his pursuers (The Fugitive, sketch, 1886, TRETYAKOV GALLERY, MOSCOW). Ivanov does not disguise his sympathy for the handsome, black-bearded peasant, one of the Mironov brothers, ‘who were on their way to Siberia for beating a village policeman and a witness’. The characters in the painting The Tramp (1890, whereabouts unknown) are portrayed with great psychological accuracy, the indifference of the policeman being contrasted with the guarded­ness of the arrested man. The painting The Dis­patch of the Prisoners (1889, Museum of the Revolution) produces a feeling of oppression. This is largely due to its colour composition: the large, dismal, dark-green expanse of the prison­ers’ carriage, the dirty grey shades of the station arches, the dark-red wall, the muddy snow and the brownish crowd of people seeing the prisoners off. The painting The Halting Place (1891, the painting itself has not survived, facsi­mile in the RadishchevArtGallery in Saratov) seems to sum up the ‘prisoners series’. Prostrate bodies, shackled in irons, are shown in a sharp foreshortening perspective, and singled out among these sleeping figures is the face of a shorn prisoner. The painting acquires great ex­pressiveness from the compositional device of magnifying the subject, which makes one feel that one is actually beside that tangle of bodies, in which, in the artist’s own words, ‘you see a pile of arms, legs and backs, and cannot distin­guish individual bodies, and then suddenly you catch sight of a pair of eyes which are fixed on you’. This compositional technique increases the poignancy of the painting’s protest against the social reality of the time.

A new period in Ivanov’s creative life began in the mid-1890s, when he turned to historical themes. His historical paintings contain features that liken him to Surikov and Ryabushkin. He understood the state of the masses at crucial moments (cf. Discord 1897,1.1. Brodsky Flat- Museum, Leningrad, Judgment of the People’s Council, 1896, private collection), he was at­tracted by the strength of the Russian national character, and, like Ryabushkin, found beauty in the everyday life of the people and asserted their understanding of this beauty. He was acutely aware of the artistic searchings of his time; and his works during these years are dist­inguished by their rich colour combinations.

Ivanov also worked with great enthusiasm on paintings of the leaders of popular uprisings —Stepan Razin and Yemelian Pugachov.

Ivanov exhibited one of his works—The Arriv­al of Foreigners in Seventeenth-Century Moscow (TRETYAKOV GALLERY, MOSCOW)—at a Peredvizhniki Exhibition in 1901 (he was admitted to the Society in 1899). The painting depicts the various attitudes of the Muscovites to the newcomers: mistrust, sur­prise and naive curiosity; the characters, the de­tails and the magnificent winter landscape all have a peculiar historical flavour.

In 1902 Ivanov exhibited his painting The Tsar. Sixteenth Century (TRETYAKOV GALLERY, MOSCOW) at an exhibition of ‘The Union of 36’—the nucleus of the future Union of Russian Artists, one of whose found­ers and organisers he was. This painting, like The Arrival of Foreigners, depicts a winter’s day. Only here there are no curious onlookers: everyone is kissing the ground. Along this un­usual ‘corridor’, past rows of people with their heads buried in the snow, the tsar’s guards in red caftans solemnly proceed. The tsar himself is seated on a richly decorated horse; he is fat and clumsy, and holds high his foolish, pompous face.

The painting got a mixed reception in the press. Some saw in the prostrated bodies and in the tsar’s shining garments ‘an awareness of the greatness of the moment’, others were puzzled: ‘the tsar’s face can scarcely be called regal; he is more like a well-fed merchant in tsar’s clothing’. The Moskovskiye vedomosti spotted that ‘Iva­nov’s disgusting lampoon’ was a caricature of the Russian tsar.

In 1903 at the First Exhibition of the Union of Russian Artists Ivanov displayed his paint­ings Strike and The March of the Muscovites. Sixteenth Century (TRETYAKOV GALLERY, MOSCOW). The latter again depicts an icy winter’s day, brought to life by the noisy, energetic troops surging along the road.

In 1910 Ivanov completed a painting entitled The Family (TRETYAKOV GALLERY, MOSCOW), on which he had been work­ing for many years. If it can be said that The March of the Muscovites and many other of Iva­nov’s paintings are similar to those of Surikov, then The Family can be likened to paintings by Ryabushkin depicting the Russian patriarchal way of life. Ivanov’s interest in history can also be seen in his illustrations for Gogol’s Taras Bulba, and in various picture-plates on histori­cal themes which he made for the Knebel Pub­lishing House.

The public-spiritedness of Ivanov’s work came to the fore during the 1905-07 revolution. As early as 1903 his painting Strike (The Uz­bekistan Museum of Fine Arts, Tashkent) was shown at an exhibition of the Union of Russian Artists; this was the first depiction of the prole­tariat in rebellion in the history of Russian art. In 1905 he painted one of his most impressive historical-revolutionary works, Execution (Mu­seum of the Revolution). Here, the ideas adum­brated in At the Jail and Uprising in the Country were expressed with even greater acuteness.

An empty grey square, hung over by huge buildings, separates the soldiers from the dem­onstrators. A volley is fired, and the first vic­tims fall to the ground. In the rays of the setting sun the colour contrasts of violet, yellow, crim­son and brown on the buildings seem sinister. The splashes of blue and dark-red in the dead men’s clothes on the evenly lit square strike a tragic note. The meaning of the events is clear: the courage of the bearers of the red flag marching to their death, and the cruelty of their punishers.

Ivanov made a magnificent etching (PushkinFineArtsMuseum, Moscow) from the painting Execution; he also etched another historical- revolutionary work entitled Beside the Wall. An Episode from 1905.

The Victors (1905, Museum of the Revolu­tion) was the sarcastic title Ivanov gave to his water-colour depicting the results of ‘victorious’ actions of the tsarist henchmen: a snow-covered square, corpses, and a woman fleeing with a lit­tle girl, seized by terror. Ivanov exposed the meaning of the tsarist manifesto about ‘free­doms’ in the drawings The Suppressors and The Search.

On 20 October, the day of the revolutionary N. Bauman’s funeral, Ivanov was among those guarding the university from the police. That night in the university—which the students turned into a temporary hospital—has been immortalised in sketches and drawings by Iva­nov. An album of rough drafts for the painting The Funeral of Bauman has also been pre­served.

Teaching occupied an important position in Ivanov’s life. He taught for eleven years in the Moscow School of Art and in the StroganovCollege, and many Soviet artists owe a great deal to him for the development of their talent.

Ivanov was a modest, self-effacing man, but he possessed a vivid, unique talent. In his works he revealed the story of Russia, past and pre­sent, and the ‘movement of life’ towards the fu­ture.

Sergei Ivanov died at the age of forty-six on 3 August 1910.