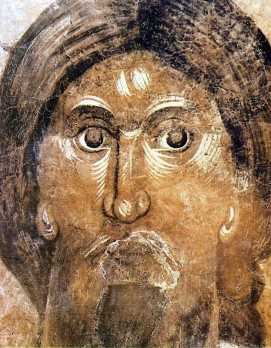 “A famous sage, a wise philosopher, a master who excelled in decoration of manuscripts and the best of icon-painters”, such were the words of the educated monk Epiphany the Wise about his contemporary Theophanes the Greek.

Theophanes, one of the greatest medieval Russian painters, was born in Byzantium, and was therefore known in Russia as ‘the Greek’. It is estimated that he was born in the thirties of the fourteenth century. When he came to Rus he was 35-40 and already decorated more than forty stone churches in Constantinople, Chalki-dike and Galata. From Byzantium he travelled first to Kaffa (Feodosia), at that time a rich Genoese colony, and then to Novgorod.

In Rus, which was developing as a result of the inchoate struggle for the liberation and unification of the lands around Moscow, Theophanes found a fruitful outlet for his enormous talent. His extremely distinctive art, based on Byzantine traditions, both influenced and came under the influence of Russian culture. 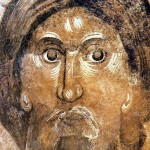 The Pantocrator (Christ the Almighty), fresco in the Church of Our Savior, Ilyin Street, Novgorod 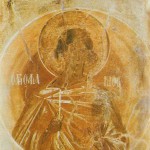 St. Akaky, fresco in the Church of Our Savior, Ilyin Street, Novgorod 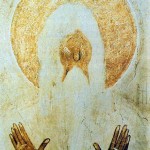 St. Makary of the Egypt, fresco in the Church of Our Savior, Ilyin Street, Novgorod 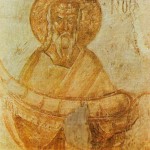 Noah, fresco in the Church of Our Savior, Ilyin Street, Novgorod 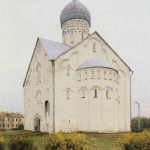 The first paintings done by Theophanes in Russia were the frescos in one of the splendid cathedrals of Novgorod—the Church of Our Saviour (Transfiguration) in Ilyin Street, built in 1374. The frescos were commissioned by the boyar Vasily Danilovich and the citizens of Ilyin Street, and Theophanes worked on them during the summer of 1378.

These frescos have been partly preserved. In the cupola there is a depiction of the Pantocrator (Christ the Almighty) and four seraphim. On the walls between the windows are the figures of Adam, Abel, Noah, Seir, Melchizedek, Enoch, the prophet Elijah and John the Baptist, and in the chapel, specially commissioned by the boyar, are five stylites, The Holy Trinity and in medallions are depicted the Saints John Climacos, Agathon, Akaky and Makary.

All the saints painted by Theophanes the Greek are different, each with individual, complex features. But at the same time they all have something in common: the wrathful, mighty Pantokrator, the wise, majestic Noah, the sombre Adam, the menacing prophet Elijah and the self-absorbed stylites are all strong in spirit and steadfast in character, people torn by contradictions, people whose outer calm conceals their inner struggle against raging passions.

Even the composition of The Holy Trinity shows no appeasement. No youthful mildness can be sensed in the figures of the angels, whose beautiful faces are severe and aloof. The central figure is particularly expressive, his immobility only serving to emphasize the tenseness of his inner self. His outstretched wings overshadow the other two angels, unifying the composition and lending it austere completeness and a monumental character.

Theophanes’ figures have a powerful emotional effect and strike a moving, tragic chord. There was a sharp, dramatic quality in his very manner of painting, which was impetuous and spirited. He fashioned his figures with bold, vigorous strokes, applying vivid highlights to achieve emotionality and intensity of expression. His palette is as a rule laconic and restrained, but the colour is saturated and meaningful, and the overall expressiveness of the figures is further intensified by the abrupt, sharp lines and the complex rhythm of the compositional structure.

Theophanes the Greek’s paintings testify to his profound knowledge of life. His powerful figures are full of intense dramatic emotions; they are deeply philosophical and reveal the penetrating mind and passionate philosophical temperament of their author.

The artist’s contemporaries were impressed by his originality of thought and by the range of his creative imagination. ‘When he painted, no one ever saw him following standard patterns — unlike some of our icon-painters, who spend more time perplexedly studying models than painting. He paints with his hands, but constantly is on the move, chatting with callers, cogitating things wise and elevated, and seeing goodness with eyes of reason.

The frescos in the Church of Our Saviour are among the most precious examples of Novgorod monumental art and influenced the work of many other icon-painters. Closest to them are the murals in the FyodorStratilatChurch and the Church of the Dormition in Volotovo Pole, which were probably done by Theophanes’ pupils.

Theophanes appears to have lived in Novgorod for quite a long time, and then, after working for a while in Nizhny Novgorod, to have gone to Moscow. There is more information available about this period in his work. It is likely that Theophanes had his own studio and carried out commissions with the help of his pupils. The works mentioned in chronicles of the time cover the ten years from 1395 to 1405, during which the artist decorated three cathedrals in the Moscow Kremlin — the Church of the Nativity of the Virgin Mary (1395), the Cathedral of the Archangel (1399) and the Cathedral of the Annunciation (1405) — and also painted some secular works — frescos in the terem-palace of the Grand Prince Vasily Dmitrievich and in the palace of Prince Vladimir Andreyevich Khrabry (the cousin of Dmitry Donskoy).

Of all these works, the only one still extant is the iconostasis (The iconostasis was a wall, decorated with icons, separating the altar from the central part of the cathedral. The icons were arranged in rows according to a strict religions hierarchical system: ‘local’ icons in the lowest row, then the ‘Deesis range’, above it rows dedicated to festivals and prophets, and at the very top — the Crucifixion) in the Kremlin Cathedral of the Annunciation, which Theophanes painted together with Andrei Rublyov and the monk Prokhor from Gorodets. Rublyov worked on the icons depicting the festivals, while Theophanes painted most of those in the central row, the so-called ‘Deesis range’: The Saviour, The Virgin, John the Baptist, The Archangel Gabriel, The Apostle Paul, John Chrysostomos and Basil the Great.

The iconostasis has an overall unifying design, however, and a precise, harmonious composition. In the centre is the stern judge — the Saviour, seated on a throne; on either side are saints, interceding with Christ for sinful mankind. As before, Theophanes’ saints are powerful and individualised. But here there are also new qualities: they are more restrained and majestic. There is more warmth in the image of the Virgin, more gentleness in that of the Archangel Gabriel and more tranquility in the wise apostle Paul.

The icons are exceptionally monumental in character. The figures are clearly silhouetted against a brilliant gold background, and the colours of their garments are vibrant — Christ robed in snow white, the Virgin Mary in velvety blue, and John in green. And although in his icons Theophanes retains the general style of his murals, his lines are simpler and more distinct and restrained.

The task of decorating the Cathedral of the Annunciation brought together two great masters of ancient Rus, who each in his own way gave expression to an age full of dramatic conflicts: Theophanes in tragic, titanic images, Rublyov in harmonious, serene images, expressing a dream of peace and harmony among people. It was these two artists who created the classical form of the Russian iconostasis.

The work on the Cathedral was completed in one year. What happened to Theophanes thereafter, and what other works he painted, is unknown. Scholars believe that he worked as a miniaturist, and some consider that the miniatures for two ancient Russian manuscripts — the Koshka and the Khitrovo Gospels — were painted in Theophanes’ studio and were possibly designed by him. Where he spent the last years of his life is also not known. He appears to have died between 1405 and 1415, since a letter written by Epiphany the Wise mentions that in 1415 the great artist was no longer alive.

A native of Byzantium, Theophanes found his second homeland in Rus. His impassioned, inspired art was in keeping with the general disposition of the Russian people and exercised a beneficial influence both on his contemporaries and on later generations of Russian artists.