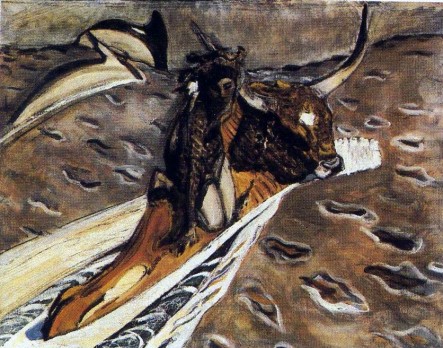 Valentin Serov was born in St. Petersburg, the son of the well-known composer Alexander Serov. In his childhood the future artist was steeped in an artistic atmosphere: not only mu­sicians, but also artists such as Mark Anto­kolsky and Ilya Repin were visitors to the house, and Alexander Serov himself was an ar­dent amateur artist. His son’s powers of obser­vation and talent for drawing became apparent from an early age and the conditions in which he grew up were conducive to their development. At first he studied under the German etcher A. Kemping, and then he was taught by Repin, whom his mother had shown his drawings, on the advice of Antokolsky.

Repin gave the young Serov his first lessons in Paris and continued them in Moscow and Abramtsevo. After a trip with his talented pupil to Zaporozhye, Repin sent him in 1880 to the celebrated Pavel Chistyakov at the Academy of Arts.

Here the young artist’s talent won admiration and respect all round. Chistyakov remarked that he had never come across anyone endowed with so much versatile artistic talent: ‘Drawing, colouring, chiaroscuro, characterisation, a sense of the wholeness of his task, composition— Serov could cope with all these things, and cope with them to the highest degree.’

The artist’s friends valued his human qualities too, especially his straightforwardness and honesty. 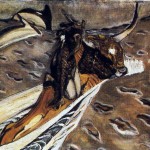 The Abduction of Europa 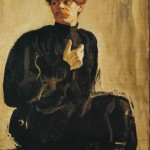 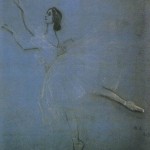 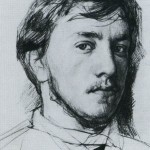 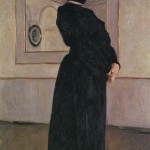 The formation of Serov’s artistic outlook was greatly affected by his life at Abramtsevo and Domotkanovo, not far from Moscow. He came to love the central-Russian countryside with its groves, glades, ravines, coppices and villages. And the estate of the famous art-patron Ma­montov at Abramtsevo, where Korovin and Vrubel worked on stage decorations, where there was a majolica workshop, and a successful private opera house, inspired the young artist to great creative heights. At the age of twenty-two or twenty-three Serov produced works which have become classics of Russian art.

In 1887 Serov married Olga Trubnikova, and their family was large and happy. Serov loved children and enjoyed painting them. The picture-portrait Children (1899, RUSSIAN  MUSEUM, SAINT PETERSBURG), which shows his sons Yura and Sasha, the drawing The Botkin Sisters (1900, TRETYAKOV GALLERY, MOSCOW) and the portrait of Micky Morozov (1901, TRETYAKOV GALLERY, MOSCOW) are all noteworthy for their lyrical qualities and sensitive understanding of the children’s characters.

Reminiscing about her father, Serov’s elder daughter described the creative fervour with which he used to work on his portraits: ‘And his eyes—his eyes would steal a quick glance, with such intensity and such a desire to take in every­thing he needed, that this glance would seem like a flash of lightning, and like lightning it would momentarily light up everything, right down to the finest details.’

In the middle of the nineties Serov was inundated with commissions to paint high-rank­ing persons. After the portrait of Maria Moro­zova (1897, RUSSIAN  MUSEUM, SAINT PETERSBURG), the mother of multimillion­aire Savva Morozov and the picture-portrait of S. Botkina (1899, RUSSIAN  MUSEUM, SAINT PETERSBURG), which was shown at a World Exhibition in Paris, a new line began to develop in the artist’s work. Serov’s contempo­raries said that people were often afraid of him, afraid of his perspicacity and frankness, and even reproved him for caricaturing his models. ‘I have never caricatured,’ he replied. ‘What can I do if the caricature is there in the model himself, how am I to blame? I merely picked it out.’

This approach is evident in the portraits of the Yusupov princes (1901-03, RUSSIAN  MUSEUM, SAINT PETERSBURG), which Serov began in St. Petersburg in 1901 and completed at their estate in Arkhangelskoye near Moscow; and in the portrait of the millionaire and assis­tant professor at Moscow University, M. Moro­zov (1902, TRETYAKOV GALLERY, MOSCOW). One of the best-known por­traits is that of the banker V. Girshman (1911, TRETYAKOV GALLERY, MOSCOW) who, according to Serov’s daughter, ‘beg­ged him to remove his hand, which looked as though it were groping for gold coins in his pocket’.

Serov did not intend to expose faults, he merely sharpened those features which were sometimes deeply hidden and not immediately apparent to everyone. If he liked a person, even though it was an official commission, the master’s brush would produce an attractive image: for example, Z. Yusupova (1902, RUSSIAN  MUSEUM, SAINT PETERSBURG) is charmingly feminine and gentle, and G. Girshman (1907, TRETYAKOV GALLERY, MOSCOW) is a pleasing image of aristocratic refinement.

Serov’s painting and drawing skills are quite outstanding. The great emotional effectiveness of his works can be explained by his ability to find precisely the right means of representation and to embody a many-faceted picture of life in a perfect form. Take any of Serov’s portraits: it is not just a talented reproduction of some individual’s features, but an image of the world in which that person lives.

The revolution of 1905 left noticeable traces in the artist’s life and work. It was precisely in this period that Serov developed as a ‘citizen’, acutely aware of social injustices. In St. Peters­burg Serov witnessed the shooting-down of workers on the VasilievskyIsland, and was pro­foundly shaken by the event. ‘He heard the shots and saw the victims. From then on his char­acter changed sharply—he became morose, brusque, irascible and intolerant; everyone was particularly surprised by his extreme political convictions,’ wrote Repin. As a sign of protest he rescinded his membership of the Academy of Arts. The day political prisoners were released Serov was among those outside the Taganka prison, he watched barricades being erected at the University, and he attended the funeral of the revolutionary Bauman. The artist’s album began to include drawings of the Cossacks’ charges on the defenceless crowd; and then pic­tures too, for example. Soldiers, Brave Fellows, Where Is Your Glory? (tempera, 1905, RUSSIAN  MUSEUM, SAINT PETERSBURG) and Barricades; the Funeral of N. E. Bauman (1905, ex Museum of the Revolution), and biting political caricatures exposing Nicholas II as the hangman of the revolution: 1905. After the Suppression and 1905. Views of the 1906 Harvest (1905, TRETYAKOV GALLERY, MOSCOW).

These years also saw Serov achieve perfection as a graphic-artist. His portrait-drawings of the singer Fyodor Chaliapin, the actor and stage-di- rector Konstantin Stanislavsky, the actors Ivan Moskvin and Vasily Kachalov, the composer Nikolai Rimsky-Korsakov, the artist Mikhail Vrubel and the writer Leonid Andreyev are the pride of Russian art.

Around the turn of the century the artist treated themes from earlier Russian history, producing a cycle of pencil drawings, guaches, water-colours and pictures in tempera and oils. These small compositions are extremely vibrant, as though done from nature (cf. Peter the Second and Yelizaveta Petrovna Set Out on the Hunt, 1900, RUSSIAN  MUSEUM, SAINT PETERSBURG).

The heroic Petrine age, severe and un­precedented, took possession of the artist’s imagination. One of the best works was Peter the Great (1907, TRETYAKOV GALLERY, MOSCOW), in tempera. ‘Spindle-shanked’, threatening and impulsive, Peter is moving against a strong wind. His preposterous carnival-like retinue, their clothes flapping in the wind, struggles with difficulty behind him. In everything—in Peter’s determined striding towards a new building, in the turbulent wa­ter, in the thin masts of the ships, and in the racing clouds—one feels the dynamism of trans­formations which were only possible thanks to the will, energy and efforts of courageous people.

In May 1907 Serov went to Greece, which made a deep impression on him. He was de­lighted by the decorative qualities and balance of classical architecture. In an effort to express what he saw, and to convey the essence and beauty of ancient Greek mythology, he painted a picture based on the legend The Abduction of Europa (1910, TRETYAKOV GALLERY, MOSCOW) and several versions of Odysseus and Nausika (1910, TRETYAKOV GALLERY, MOSCOW, RUSSIAN  MUSEUM, SAINT PETERSBURG).

Serov’s work in the theatre was also interest­ing: his curtain for the ballet Scheherazade was greatly admired in Paris and London.

His interest in monumental-decorative art led to the highly original portrait of the dancer Ida Rubinstein (1910, RUSSIAN  MUSEUM, SAINT PETERSBURG). The artist found re­minders of the Orient in the dancer’s appear­ance, and compared her with the figures of clas­sical bas-reliefs.

Early on the morning of 22 November 1911 Valentin Serov was hurrying to the Shcherbatovs for a portrait sitting when he fell and suffered an attack of stenocardia. He died at the peak of his talent, at the age of forty-six.

His death shocked his contemporaries. The poet Valery Bryussov, an ardent admirer of the artist, wrote: ‘Serov was a realist in the best sense of the word. He unerringly saw the secret truth of life, and the things he painted revealed the very essence of phenomena, which other eyes cannot even see.’