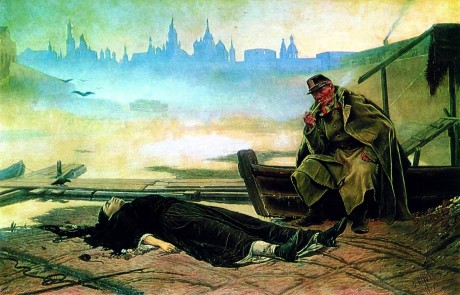 The distinguished Russian painter Vassily Perov was born in Tobolsk, Siberia, and received his artistic training in Moscow where he lived and worked most of his life. He painted in the 1860s and 1870s, a time of intense social conflicts in Russia when age-old ways of life crumbled following the abolition of serfdom. In the confrontation between reactionary and democratic forces progressive artists took the side of the people. We will understand their ideas and aspirations better if we relate them to those of realist writers like Nikolai Nekrasov, Ivan Turgenev, Fyodor Dostoyevsky and the young Lev Tolstoy. They all felt a deep interest in the life around them and took a critical stand towards it, analysing it from a humanistic standpoint.

Vassily Perov most excelled in his genre scenes where he depicted everyday life, sometimes good-naturedly and sometimes with a strong flavour of social satire. He was harsh and merciless when indicting the oppressors and sad when sympathising with those Dostoyevsky called the “insulted and humiliated”. That was why the authorities immediately banned the reproduction of one of his first pictures, “Religious Procession in a Village at Easter”.

In 1861 the Academy of Fine Arts awarded Perov a big gold medal and, as was the custom, he was sent to Paris to polish his technique. But the artist would not stay in Paris the full length of time: he was impatient to get home to “study and elaborate a vast multitude of subjects of both urban and rural life in our country”. In 1870 Perov, together with other democratic Russian painters, founded the Society for Travelling Art Exhibitions, to oppose academic salon art, which idealised life. 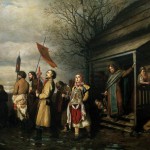 Religious Procession in a Village at Easter 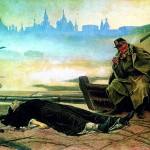 Imbued with a civic spirit, Perov’s genre scenes truthfully portray the hard life of the poor. “Seeing Off the Dead Man”, “The Drowned Woman”, “At the Last Inn” and “Troika” (three children harnessed in the sledge are pulling a barrel of water) — all these give us an insight into the woes of the common people.

Still popular are such works by Perov as “Bird-Catcher” and “Hunters at Rest”, which have a humourous touch to them. Perov was also famous for his portraits. One of his masterpieces is the portrait of Fyodor Dostoyevsky, a penetrating study of character remarkable for its expressiveness and simplicity. Commissioned by merchant and patron of the arts Pavel Tretyakov, the painting was included in his collection, which later became the world famous TretyakovArtGallery, Moscow.

Besides the Tretyakov Gallery, works by Vassily Perov, a prominent figure in the school of Russian realist painting, are on show at the RUSSIAN  MUSEUM in St.Petersburg and the Museum of Russian Art in Kiev.