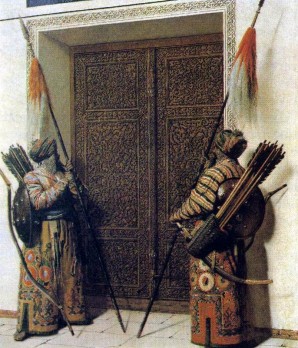 The great Russian battle-painter Vasily Ve­reshchagin, the son of a landowner, was born in Cherepovets. When he was eight he was sent to the Junior Cadet Corps, and in 1853 he was transferred to the St. PetersburgNavalSchool. It was here that he developed an interest in drawing and began to devote more and more time to it. In 1858 Vereshchagin began to attend drawing classes at the St. Petersburg Society for the Furtherance of the Arts. His teachers gave good reports about his progress, and he himself now dreamt of becoming an artist.

In 1860, having graduated from NavalSchool with flying colours, Vereshchagin sent in his pa­pers against his parents’ wishes and entered the Academy of Arts. Outraged by this action, his father cut off all material assistance and Veresh­chagin was left to fend for himself. He applied himself wholeheartedly to painting, but the Academy system of teaching, with its standards and traditions, weighed heavy on the artist. As an act of protest he destroyed one of his paintings—Ulysses’ Slaughter of the Young Men of Penelopa. In 1863 he left the Academy and went to the Caucasus ‘to learn from interesting objects of Nature’. His first independent works were numerous drawings of popular types, genre scenes and Caucasian landscapes.

In 1866, living in the village of Lyubets on the River Sheksna, Vereshchagin observed the backbreaking work of the barge-haulers. He planned a large painting which would show the desperate fate of poor folk in tsarist Russia, but, though he did several studies on this theme, the work was never completed. 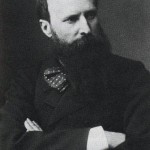 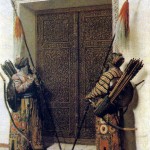 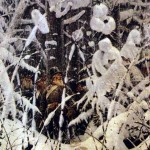 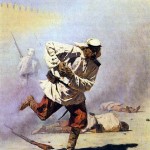 In 1867 he went to Turkestan, which was then the scene of military confrontations. ‘I went to find out what war, about which I had read and heard so much, was really like . . .’ Not only did he witness the war; he took part in it. In 1868 he joined the Russian garrison defending the Sa­markand fortress against the troops of the Emir of Bukhara and was given the George Cross for bravery and courage. In 1869-70 Vereshchagin undertook another trip to Turkestan; he learnt about the country, studied the customs and mores of the feudal East and as a result created a large series of pictures about Central Asia.

Central to this series were Vereshchagin’s battle-pieces, and it was they that enjoyed great­est success both in Russia and abroad, and helped determine the basic orientation of the artist’s work. From his earliest works Vereshchagin spoke out in protest against aggressive wars, throwing the blame at the feet of those who were responsible for the deaths of human beings. This antimilitarist stance was the result of the artist’s personal observations and deliberations on the matter. He introduced to battle-painting a bare-faced truthfulness which Russian art had never known before. His heroes were soldiers, the simple Russian people— ‘only wearing uni­forms and carrying rifles’, as Stasov wrote.

Apotheosis of War shows a pyramid of human skulls against the background of a town de­stroyed by war and charred trees. The original idea for the picture was linked with the name of the Central Asian conqueror of the late four­teenth and early fifteenth centuries, Tamerlane, whose troops used to leave such pyramids be­hind them. But the meaning of the painting ex­tends beyond its historical context. Ruins, skulls and wasteland have always been seen as sym­bols of death and devastation, and Vereshcha­gin inscribed the frame with the words: ‘Dedi­cated to all great conquerors, past, present and future.’ Apotheosis of War is a crush­ing condemnation of all wars that bring de­struction and unhappiness.

‘I do not know if there is any artist equal to him at the present time, either here or abroad,’ wrote Ivan Kramskoi. Vereshchagin’s bold ac­cusatory paintings drew a hostile attitude from reactionary circles in Russia who accused him of slandering the Russian army. The artist took these unjust accusations badly and burned three paintings: The Forgotten Soldier, They Have Encircled and Pursue and They Entered. A ban was placed on exhibitions of Vereshchagin’s works and on reproductions of them in books and periodicals. For thirty years the tsarist go­vernment did not acquire a single picture by the already world-famous artist. Pavel Tre­tyakov bought most of his Turkestan works.

In 1874-76 and 1882-83 Vereshchagin made two trips to India to study the scenery and way of life of the country. On this journey he had to con­tend with all sorts of difficulties: he almost froze to death in the snowy heights of the Himalayas, and in the fatiguing tropical heat he fell ill with a fever. It was a productive period, however, and he painted more than 150 etudes depicting the grandeur of Indian white-stone architecture, the blue of the tropical sky and the Indians’ gay national costumes. Among his best etudes were Buddhist Temple at Darjeeling (1874-75, TRETYAKOV GALLERY, MOSCOW), Glacier on the Road from Kashmir to Ladakh (1875, TRETYAKOV GALLERY, MOSCOW) and The Taj Mahal (1874-76, TRETYAKOV GALLERY, MOSCOW).

Vereshchagin decided to devote a series of pictures to the British takeover of India. His plan was to create a large pictorial poem about the historical fate of India, about its transforma­tion from a powerful independent country into a British colony. His plan was only partly realised, however, one of the best paintings being The Procession of the British and Native Authorities in Jeypore (1875-79, VictoriaMemorialMu­seum, Calcutta).

The Russo-Turkish war which broke out in 1877-78 again brought Vereshchagin to the front. Wholeheartedly supporting the liberation struggle of the Slavs, he took part in many bat­tles. In one of them he was seriously wounded and almost died.

‘It would be impossible,’ wrote Vereshchagin, ‘to achieve the aim I have set myself, to give so­ciety a picture of war as it really is, by observing battles through binoculars from a comfortable distance: I have to feel and go through it all my­self, I have to participate in the attacks, storms, victories and defeats, experience cold, disease and wounds. I must not be afraid to sacrifice my flesh and my blood, otherwise my pictures will mean nothing.’

Once again war appeared in Vereshchagin’s paintings as a dramatic event, severe and courageous. The artist painfully and bitterly regretted the enormous toll of human lives in this bloody war in the Balkans.

The pictures of the Balkans series reproduce scenes from the war with unexampled real­ism—the Russian army’s difficult marches in the mountains, field hospitals, and Turkish at­rocities. The reverse side of war is also shown: the artist demonstrates the careerism and the criminal nature of the tsarist commanders who doomed Russian soldiers to a senseless death. The central group of pictures treats the heroic defence of the ShipkaPass: Dug-outs on the Shipka (State Museum of Russian Art, Kiev), Batteries on the Shipka (State Museum of Rus­sian Art, Kiev), All Quiet on the Shipka (1878- 79, whereabouts unknown), Shipka-Sheinovo (1878-79, TRETYAKOV GALLERY, MOSCOW).

Several of Vereshchagin’s paintings dealt with the storm of Plevna: Attack (1881, CentralArtilleryHistoricalMuseum), After the Attack (1881, TRETYAKOV GALLERY, MOSCOW). The pictures entitled The Victors (1878-79, State Museum of Russian Art, Kiev) and The Vanquished. Requiem for the Dead (1878-79, TRETYAKOV GALLERY, MOSCOW) are concerned with the Battle of Telish, at which the high command was responsible for the annihilation of almost a whole regiment of chasseurs. The Victors de­picts a grotesque masquerade: the Turks on the field of battle have changed into the uniforms of the dead Russian soldiers; the other—The Van­quished—shows an enormous field littered with soldiers’ corpses. The paintings of the Balkans series are marked by simplicity and restraint in their colouring, in which either gloomy autum­nal or overcast wintry shades prevail. The series was exhibited in St. Petersburg in 1880 and 1883 and its success surpassed all expectations: in forty days it was visited by more than 200,000 people.

The 1880s were marked by great activity, with the artist on the search for new themes. He went to India for the second time (1882-83) and then to Syria and Palestine (1883-84). His ‘Pal­estine series’ consisted mainly of etudes and pictures of a documental, ethnographical type. Particularly important was his ‘trilogy of execu­tions’—Crucifixion at the Time of the Roman Empire, The Execution of Conspirators in Rus­sia (1884-85, State Museum of the Revolution) and The Suppression of an Indian Uprising by the British (c. 1884, whereabouts unknown). The second picture of the trilogy was inspired by the punishment meted out by the Russian autocracy to members of the revolutionary Narodnaya Volya (People’s Will) organisation on 3 April 1881.

The fruit of Vereshchagin’s travels in the North in the eighties and nineties was a series of drawings and etudes of ancient wooden architectures, the scenery of northern Russia and the common folk. From 1887 to 1901 the artist worked on a series of paintings—more than twenty—about the Patriotic War of 1812. His aim was ‘to show in pictures of the 1812 War the great national spirit of the Russian peo­ple, their selflessness and heroism in fighting an enemy’. Vereshchagin managed to express the emancipatory, popular character of the war and to dethrone Napoleon, setting him down from the ‘hero’s pedestal on which he had been placed’.

The 1812 series begins with the Battle of Bo­rodino, to which Vereshchagin devoted two pic­tures—Napoleon on the Borodino Heights (1897) and The End of the Battle of Borodino (1899-1900, State Historical Museum). The stay of Napoleon’s army in Moscow is reflected in fourteen paintings, including In the Assump­tion Cathedral (1887—95), The Fire (1896—97), Through the Fire (1899—1900) and Execution in the Kremlin (1897—98; all in State Historical Museum). Several canvases depict the retreat and defeat of the French army—At Grodno: to Strike Back or Retreat?, Halting Place: Bad News From France (1887—95), On the High Road: Retreat and Flight (1887—95), The Grand Army Halts for the Night (1896-97, State His­torical Museum). The theme of the popular parti­san war against the invaders is important in the series, and it should be noted that the artist did not portray the celebrated partisan comman­ders such as D. Davydov and A. Figner but stressed the feat of the ordinary peasants who took part in the popular liberation movement.

…The pine-trees are capped with fluffy white snow. The peasants lie in wait of the enemy. Up front, peering into the thick of the forest, stands a tall old man with an axe in his hand. The enemy approaches. The guerillas’ faces show trepidation and impatience, but their old, experienced, wise leader restrains them. ‘Wait, let them come nearer,’ he seems to be saying—and this is the title of the painting (1887-95, StateHistoricalMuseum). Here Ve­reshchagin treats nature in a broad, rather deco­rative manner, seeking to create a generalised, epic image of the Russian landscape.

The picture With Gun in Hands—Fire! (1887—95, StateHistoricalMuseum) records the reprisals taken against partisans who fell into the hands of the French. The Grand Army Halts for the Night, one of the last works in the series, represents the invaders’ ignominious end, the rout of a once invincible army.

Because of its strong patriotic ideas, the depth and acuteness of the subjects, the vivid images of popular types and the interesting composi­tional structures, this last major series of the ar­tist’s made a great contribution to the genre of historical painting of the late nineteenth cen­tury.

Vereshchagin continued to travel right up to the end of his life. After his trip to Syria and Pal­estine at the end of the eighties and beginning of the nineties he twice went to America, in 1901-02 he was in the Philippines and Cuba, and in 1903 he visited Japan. His impressions of Japan found an outlet in a series of etudes which give some idea of the unusual ancient architec­ture and national customs of the country.

At the outbreak of the Russo-Japanese War Vereshchagin was busy on several paintings, all of which he dropped and rushed off to the Far East intending to take part in the battles and tell about them in his works. ‘Some people,’ he wrote, ‘spread the idea of peace with powerful words, others defend it by various arguments, religious, economic and others, and I preach the same thing by means of colours.’

On 31 March 1904 Vereshchagin perished, together with Admiral Makarov, on the battle­ship Petropavlovsk which was blown up by an enemy mine near Port Arthur.