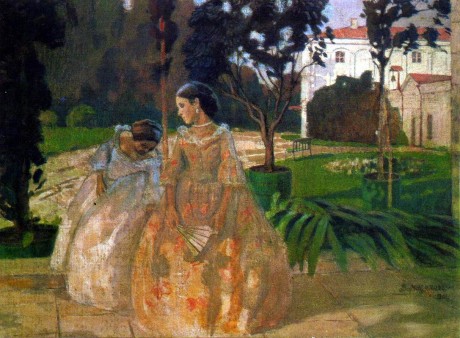 Viktor Borisov-Musatov, who became known as the creator of what one might call ele­gies in painting, was the son of a railway official and was born in Saratov. When he was three he fell and damaged his spinal cord, and this child­hood injury had a certain effect on the future ar­tist’s character: even at an early age he tended to be dreamy and reserved and liked to be alone.

In 1884 Borisov-Musatov entered the Sara­tov college, where he was taught drawing by F. Vasiliev, and later by V. Konovalov, who ar­rived from St. Petersburg. Both teachers noticed his unusual abilities, and soon Borisov-Musatov left the college to apply himself seriously to painting. From Konovalov he received his first technical skills and his first aesthetic values. At this period he drew a great deal (most often, do­mestic scenes) and painted the picture A Win­dow (1886, TRETYAKOV GALLERY, MOSCOW), which gives a detailed, but almost illusory impression of a corner of the gar­den as seen from a window of his house.

In August 1890 the young artist went to Mos­cow and joined the School of Painting, Sculp­ture and Architecture. Dissatisfied with his studies there, he left after a year for St. Pe­tersburg, where he attended the Academy as an external student and also the private studio of the well-known teacher Pavel Chistyakov. 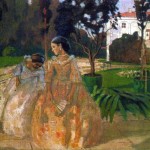 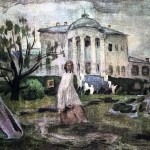 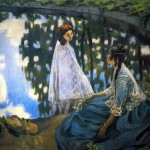 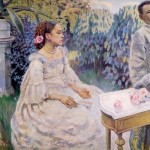 In the spring of 1893, after an operation, the artist had to leave St. Petersburg because of its climate and returned to Moscow and the School there.

Borisov-Musatov usually spent the summers in Saratov, where he painted a large number of etudes, principally landscapes. His success in painting from nature is evident in the picture May Flowers (1894, RUSSIAN  MUSEUM, SAINT PETERSBURG). In this sunny land­scape one can feel the immediate, fresh percep­tion of life which was so characteristic of Bori- sov-Musatov’s work of this period.

In the autumn of 1895 the artist went to Paris. In order to complete his artistic training he studied under the historical painter and teacher Fernand Cormon, did a lot of drawing, and vis­ited the Louvre—where he particularly admired the Botticellis. Of the French artists he met, he was closest to Pierre Puvis de Chavannes.

On his return to Russia three years later he settled once more in Saratov. From now on his works began to show his own distinctive hand, his own vision of the world.

Borisov-Musatov’s career in art came on the threshold of a new century—a complex period, rich in great creative personalities. And like Vrubel, Nesterov, Serov and Levitan, he devel­oped a distinctive, highly original approach to art.

The real beginning of his career can be con­sidered his Self-Portrait with Sister (1898, RUSSIAN  MUSEUM, SAINT PETERSBURG), for which there is no analogy in Russian art. The picture’s composition is unusual—in the centre is a pensive young girl in an old-fashioned white dress, while the figure of the artist is partly lopped off by the edge of the canvas. This introdu­ces an element of fortuitousness, recalling the pictures of the Impressionists. The style of paint­ing is new: colour and form are generalised— especially in the background landscape, which resembles theatrical scenery. In this picture we see for the first time an expression of Borisov-Musatov’s dream of a perfect, harmonious world; we see his attempt to escape from the disorder of reality into an ideal world of his imagination. This mood, which affected many members of the Russian intelligentsia at the turn of the century, became the leitmotif of Borisov-Musatov’s art. His works do not reflect any concrete historical period: ‘it is just a beau­tiful age’, as the artist himself said.

The self-portrait was followed by a cycle of lyrical pictures—An Autumn Motif (1899, Ra-dishchevArt Museum, Saratov), Untitled Motif (1900, TRETYAKOV GALLERY, MOSCOW), Harmony (1900, in collection of A. V. Gordon, Moscow). Here Borisov-Musa­tov conveys the atmosphere of autumn’s fading beauty and the quietness of old country-estates; there is an aroma of past life, and the sad poetry of a love long departed. The content of these works was to some degree inspired by his sum­mer trips to the estate of Sleptsovka, where he visited his godfather, who was steward there; here, for the first time, he deeply felt the charm of times gone by.

This new creative period was opened by the picture Spring, which, though completed only in 1901, had been planned some time before. In this work the artist completely got rid of all ele­ments of action or narrative. The emotive imagery is the result of the musical lines and the soft, full colours. Everything is in delicate har­mony: the white cherry blossom, the down of dandelions in the fresh spring grass, the pink glow of the sky and the light figure of a girl in a lilac dress and red shawl.

In the summer of 1901 the artist visited Zubrilovka, an estate owned by the Prozorovsky- Golitsyn princes. From that time on the land­scape of the Zubrilovka park was a constant source of inspiration and was incorporated —poeticised by the artist’s rich imagination—in many of his works. Impressions of this trip found their way into the picture Tapestry. Amid the decoratively reproduced vegetation of the park are two women, caught in a light, elegant movement, entirely at one with the landscape.

The title of the picture is significant: both the landscape and the figures are painted in a very generalised, flat manner, the colouring consists of large patches of soft, muted shades, and all this creates a shadowy, mirage-like impression. At the same time the decorativeness and delica­cy of the colouring evoke associations with the noble colours of an antique tapestry. The suc­cess of the painting at an exhibition of the Mos­cow Fellowship of Artists, which Borisov-Mu­satov joined in 1899, helped greatly to bring about a change in people’s attitudes to his works, which were not at first understood or appreciated.

The artist’s real masterpiece was The Pool, in which his poetic visions were expressed in a per­fect, complete form. The picture was painted at a happy time in the artist’s life, when the girl he had long loved agreed to marry him. In the sum­mer of 1902 he stayed at Zubrilovka with his sister Lena and his fiancee V. Alexandrova, and both girls posed for etudes and sketches for the picture. In The Pool, everything is balanced and conforms to a distinct, complex musical rhythm of lines and shapes. The colouring too, is strictly rhythmical, based on the repetition of blues, soft lilacs and greens in various combinations. The painting is both monumental and lyrical; the most intimate workings of the artist’s soul find expression in an arrested wonderful moment, in a bewitching, magical world of beauty.

In 1903-04 Borisov-Musatov painted the unusual panel entitled Emerald Necklace, in which the female figures moving against a back­ground of variegated green are almost woven into the pattern of grasses and leaves. Nature and man are so fused together that an impression arises of the naturalness and primi­tiveness of being.

In the spring of 1903 the artist married, and in December he moved with his wife to Podolsk, nearer to Moscow and St. Petersburg. Early in 1903 Borisov-Musatov had joined the Union of Russian Artists, which was organised in Mos­cow by a group of artists who left the ‘World of Art’ society. His works were now gain­ing fame not only in Russia but also abroad: in Germany and France, for example, there were successful exhibitions of his works.

More and more Borisov-Musatov was ac­quiring a taste for monumental painting, and in 1904-05 he did studies for decorative murals. The first group of studies was done for a compe­tition run by the Moscow Electric Traction Board and was unsuccessful, but the second cy­cle—commissioned for a private house—roused great interest. It consisted of four studies around the theme of the seasons—Spring Tale, Summer Melody, Autumn Evening and The Deity’s Dream (TRETYAKOV GALLERY, MOSCOW). All are allegorical, and in their emotionality they recall Borisov-Musa- tov’s earlier works. The studies were not destined to be turned into murals, however. In the spring of 1905 the artist left with his wife and daughter for Tarusa on the Oka, where the last months of his life and work passed. At Tarusa he painted his best landscapes: On the Balcony; Tarusa (1905, TRETYAKOV GALLERY, MOSCOW), A Nut-Tree (1905, TRETYAKOV GALLERY, MOSCOW) and Autumn Song (1905, TRETYAKOV GALLERY, MOSCOW), all of which are exe­cuted in gentle, melting colours and have great power of generalisation. Their basic theme— the fading of nature in autumn—was close to the artist’s state of mind.

At Tarusa Borisov-Musatov produced his fi­nal work—a large water-colour entitled Requi­em (1905, TRETYAKOV GALLERY, MOSCOW), dedicated to the memory of his friend P. Yu. Stanyukovich, the wife of the well- known writer, after her early death. Requiem is a sad, solemn work, symbolically conveying the joys and sorrows of human life.

The work was fated to be the painter’s own requiem too. On the night of 25-26 October 1905 Borisov-Musatov passed away. He was buried in Tarusa, on a high bank over the River Oka.