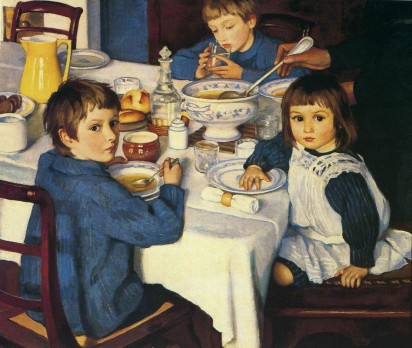 Zinaida Serebryakova was born on the estate of Neskuchnoye near Kharkov. Her father, Yevgeny Lansere, was a well-known sculptor, and her mother, who was related to Alexander Benois, was good at drawing. One of Zinaida’s brothers, Nikolai, was a talented architect, and her other brother, Yevgeny Lansere, has an important place in Russian and Soviet art as a master of monumental painting and graphic art.

Zinaida’s childhood and youth were spent in St. Petersburg, where her grandfather the archi­tect N. L. Benois lived, and at Neskuchnoye. The family was so artistic that no one was surprised by the girl’s talent and desire to become an artist.

Her years of study did not last long. In 1901 she studied at the art school headed by Ilya Repin, and later she was taught by Osip Braz.

Zinaida’s early works, which appeared at an exhibition in 1909, already showed her own style and field of interests. While studying clas­sical art in the StateHermitageMuseum, Saint Petersburg and in the museums of France and Italy, she was drawn to the works of Tintoretto, Poussin, Jordaens and Rubens by their powerful plastic forms and national character. But most of all she was captivated by the purity and chastity of Venetsianov’s images. She could feel the importance of the simplicity and inner harmony inherent in Vene­tsianov’s peasants and saw the inseparable link between these traits and Russian nature. ‘I cannot see enough of this wonderful artist,’ she wrote afterwards. 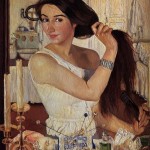 At the Dressing-Table. Self-Portrait 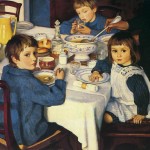 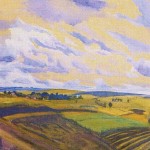 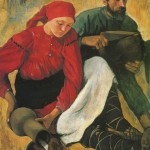 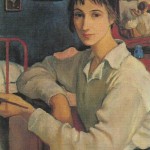 Another influence on the artist’s work was her life at Neskuchnoye: she was delighted by the pure colours of the local countryside, by the leisureliness of country life and by the freedom and plasticity of the movements of the peasants at work.

Ever since her youth Zinaida Serebryakova strove to express her love of the world and to show its beauty. Her earliest works—Country Girl (1906, RUSSIAN  MUSEUM, SAINT PETERSBURG) and Orchard in Bloom (1908, private collection)—speak eloquently of this search, and of her acute awareness of the beauty of the Russian land and its people. These works are etudes done from nature, and though she was young at the time her extraordinary talent, confidence and boldness were apparent.

Broad public recognition came with Serebrya­kova’s self-portrait At the Dressing-Table (1909, TRETYAKOV GALLERY, MOSCOW), first shown at a large exhibition mounted by the Union of Russian Artists in 1910.

Alexander Benois wrote about the portrait: ‘A young woman lives in a remote country area . . . and has no other pleasure, no other aesthetic enjoyment on winter days that seclude her from the whole world, than to see her gay young face in the mirror and to watch the play of her bare arms and hands with a comb . . . Her face and everything else in the picture is young and fresh. There is not a trace of modernistic refinement. But the simple, real-life atmosphere, illuminated by youth, is joyous and lovely.’

In 1914-17 Zinaida Serebryakova was in her prime. During these years she produced a series of pictures on the theme of Russian rural life, the work of the peasants and the Russian coun­tryside which was so dear to her heart: Peasants (1914-15, RUSSIAN  MUSEUM, SAINT PETERSBURG), Sleeping Peasant Woman (pri­vate collection).

The most important of these works was Bleach­ing Cloth (1917, TRETYAKOV GALLERY, MOSCOW) which revealed Zinaida Serebryakova’s striking talent as a monumental artist. The figures of the peasant women, por­trayed against the background of the sky, gain majesty and power by virtue of the low horizon. The colour composition, built around a combination of large areas of red, green and brown, lends the smallish picture the character of a monumental-decorative canvas, or part of a large frieze. This magnificent work is like a hymn to peasant labour.

Serebryakova joined the ‘World of Art’ socie­ty, but stood out from the other members of the group because of her preference for popular themes and because of the harmony, plasticity and generalised nature of her paintings.

When in 1916 Alexander Benois was com­missioned to decorate the Kazan Station in Moscow, he invited Yevgeny Lansere, Boris Kustodiev, Mstislav Dobuzhinsky and Zinaida Serebryakova to help him. Serebryakova took on the theme of the Orient: India, Japan, Tur­key and Siam are represented allegorically in the form of beautiful women. At the same time she began compositions on subjects from clas­sical mythology, but these remained unfinished.

The deeply personal, feminine element in Zi­naida Serebryakova’s work continued to deve­lop, and this came to the fore particularly in her self-portraits: in them the naive coquetry of a girl alternated now with an expression of mater­nal joy, now with tender, lyrical sadness.

Many of the artist’s plans were not to be realised. Her husband (Boris Serebryakov, a railway engineer) died suddenly of typhus, and Zinaida was left with her mother and four chil­dren on her hands. In 1920 the family moved to Petrograd. The elder daughter went in for bal­let, and from then on the theme of the theatre ran through Serebryakova’s work. The range of her work narrowed: most often she depicted ballerinas before a performance, and for all the merits and beauty of these pictures they cannot have statisfied her.

In the autumn of 1924 Serebryakova went to Paris, having received a commission for a large decorative mural. On finishing this work she intended to return to Russia, where her mother and two children remained. But life turned out differently and she stayed in France.

Serebryakova’s long years away from Russia were full of nostalgia and brought her neither joy nor creative satisfaction. The works she pro­duced after 1924 indicate that even in a strange land she still stuck to her favourite theme of popular life, remaining faithful to the art of realism.

Zinaida Serebryakova travelled a great deal. And everywhere, be it in Brittany, Algeria or Morocco, it was the common folk that appealed to her artist’s mind. Among the best works she produced as a result of these travels are her por­traits of peasants and fishermen in Brittany.

The salient feature of her later landscapes and portraits is the artist’s own personality—her love of beauty, whether in nature or in man. And yet, the most important thing was miss­ing—the connection with what was near and de­ar to her.

In 1966 a large exhibition of Zinaida Sere­bryakova’s works was mounted in Moscow, Le­ningrad and Kiev. The public response and the Soviet state’s recognition of this great master’s services brought her enormous joy. Many of Se­rebryakova’s works were acquired by Soviet museums after the exhibition.

On 19 September 1967, at the age of eighty-two, Zinaida Serebryakova died in Paris.