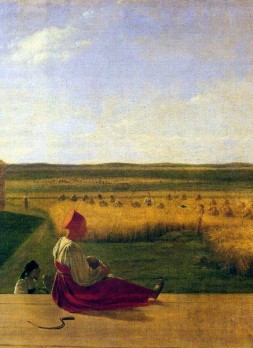 One of the founders of the Russian genre painting, Alexei Venetsianov, was born into a not particularly well-off merchant family in Moscow. His father traded in fruit-bushes. There is evidence that he also dealt in pictures, and this may have helped awaken the young Venetsianov’s interest in art. The future artist had his first lessons in drawing in a private Moscow boarding-school.

It was when he came to St. Petersburg in 1807 that he began to take painting seriously. He was taught by Vladimir Borovikovsky,in whose studio he worked until 1810. At the same time he studied and copied works of classical art in the StateHermitageMuseum, Saint Petersburg.

Venetsianov’s earliest works included portraits of A. I. and A. S. Bibikov (1805-09, RUSSIAN  MUSEUM, St.Petersburg). His interest in portraiture was not accidental—it was in this genre that most innovations were made in the early nineteenth century. The young artist’s successes were immediately noticed. The majority of his early portraits were done in pastel, a technique little used by Russian artists. They are unassuming, simple works, totally lacking in showiness. 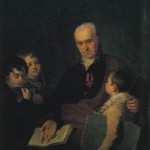 Portrait of K.I. Golovachevsky, Inspector of the Academy of Arts, with Three Pupils 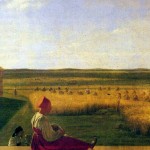 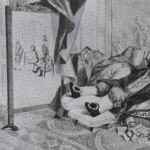 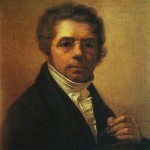 In 1811 Venetsianov painted one of his best early works, Self-Portrait (RUSSIAN  MUSEUM, St.Petersburg), for which he was awarded the first academic title—associate of the Academy—and shortly afterwards, for his Portrait of K. I. Golovachevsky, Inspector of the Academy of Arts, with Three Pupils (1811, RUSSIAN  MUSEUM, St.Petersburg), he was made an academician. Such early, sudden recognition of the artist was due entirely to the merits of his works. His Self-Portrait, painted in restrained shades of olive, stood out from self-portraits by other artists of the time because of its impartiality and naturalness. The portrait of Golovachevsky is in a more traditional line, and suffers from being rather didactic, but nonetheless the treatment of the images is winningly cordial and warm.

Also at this period Venetsianov did some interesting work in the field of graphic art. He attempted to start up Russia’s first satirical magazine—Journal of Caricatures, 1808—in which he hoped, by means of drawings, to ‘improve morals and educate society in the best traditions’. But the very first issue of this publication was suppressed by the government. The reason for the ban is thought to have been an etching to accompany Derzhavin’s ode The Nobleman, the significance of which far exceeded that of mere illustration. The satirical portrayal of an obese, indolent nobleman, and the sympathetic depiction of his suppliants—a wounded soldier, a widow and child—made this etching extremely topical and socially poignant.

Venetsianov returned more than once to satirical etchings. During the Patriotic War of 1812 he produced a series of topical sheets. In his etchings The French Coiffeur and French Education, for instance, he lampooned the Gallomania of the Russian nobility.

The artist found his real vocation, however, neither in graphics nor in the art of portraiture which had brought him fame. His talent lent itself to quite a different area. Venetsianov was fully aware of this, and half-way through his career he found the strength to give up working as a portraitist. On one of his portraits we find a remark: ‘Venetsianov hereby renounces portrait-painting, March 1823.’

At the beginning of 1819 the artist had gone to the small estate of Safonkovo in Tver Guber-nia. Here, at the age of forty, he more or less went back to square one. He was fascinated by the common people, by serfs and peasants who had heroically fought Napoleon’s troops and who retained their human dignity and nobility despite the yoke of serfdom. And although from time to time he did still do some portraits, Ve-netsianov’s main interest from the 1820s on was in genre art.

This new stage in the artist’s work was not merely the result of fortuitous circumstances in his private life, however. The beginning of the nineteenth century was a time when all the progressive members of Russian society were striving to bring about a transformation of the country and the enlightenment of the people. It was then that a society was set up in St. Petersburg with the noble aim of spreading literacy among the common people. This was the prevailing atmosphere in which Venetsianov’s art took a new turn. Rural life provided him with a wealth of material and opened up a new world—the world of the beautiful, lyrical Russian countryside.

Venetsianov’s first pictures in the new genre—the pastels Beet-Picking (c. 1820, RUSSIAN  MUSEUM, St.Petersburg) and The Reaper (1820, Tretyakov Gallery, Moscow)—eloquently testify to the fact that he was making a conscious effort to achieve realistic authenticity, considering the painter’s main goal ‘to represent nothing otherwise than as it is in nature … to obey nature alone, without adding the manner of any artist’.

Central to Venetsianov’s work is the painting The Threshing-Floor (1821, RUSSIAN  MUSEUM, St.Petersburg), on which he worked for more than three years. Depicting a commonplace scene, the artist gives an extremely realistic impression of the enclosed area, which is illuminated by a flood of light pouring in from either side. However, the desire to record everything precisely ‘as it is in nature’ led to a certain dryness and immobility in the portrayal of the human figures.

The Threshing-Floor was the first in a series of works on peasant themes. As portrayed by Venetsianov, the Russian peasants are people filled with beauty and nobility of mind, with moral purity and inner integrity. In his desire to poeticise Russian man and to affirm his dignity, the artist tended to idealise the life and work of the peasantry, without showing the actual hardships of serf labour. But the very fact of treating ‘low’ —from the point of view of official aesthetics— theme of peasant life is worthy of notice. Like no other artist in the first half of the nineteenth century, Venetsianov asserted his right to depict the common folk who worked the land.

His talent really flourished in the twenties and thirties, when he produced such masterpieces as Ploughing in Spring, Harvesting in Summer (both 1830s, Tretyakov Gallery, Moscow), Children in the Field (early 1830s, RUSSIAN  MUSEUM, St.Petersburg) and several sketches.

The working peasants in Venetsianov’s canvases are beautiful and full of dignity. In Ploughing in Spring the theme of work is interwoven with those of motherhood and the beauty of the Russian countryside. The artist’s best and most accomplished genre work—Harvesting in Summer—is marked by a lyrical, epic perception of life. While in the first picture Venetsianov depicted a spring landscape with vast expanses of fields, leaves just appearing on the trees, and light clouds in the blue sky, in the second he allows one to feel the height of a Russian summer—a time of toil in the villages—with shining golden cornfields and a scorching sky. Both canvases are painted in bright, clear colours.

One of Venetsianov’s most poetic works, full of serenity and peace, and love of man and nature, is the small painting Sleeping Shepherd-Boy (1823-26, RUSSIAN  MUSEUM, St.Petersburg). The smooth, calm rhythms of the plains, the gently sloping hillsides covered in slender young trees, solitary firs, a low-banked stream—all these dear, familiar motifs the artist found in his native countryside. In Venetsianov’s paintings the landscape is not merely a background but plays an active role in conveying moods and in the overall conception.

In 1824 an exhibition of Venetsianov’s paintings in St. Petersburg evoked an enthusiastic response in Russian progressive circles. ‘At last we have an artist who has used his wonderful talent to depict things purely Russian, to describe the things all around him, which are so close to his heart and to ours . . .’ wrote P. P. Svinyin, the founder of the RUSSIAN  MUSEUM in St. Petersburg.

In the years that followed Venetsianov painted many portraits of peasant girls—A Peasant Girl, Peasant Girl with Mushrooms in the Wood, Pelageya (1820s, RUSSIAN  MUSEUM, St.Petersburg), Girl with Embroidery, Peasant Girl with Cornflowers (1830s, Tretyakov Gallery, Moscow) and others. For all their differences, these works are united by the artist’s aspiration to express his new ideas about beauty in art, about popular beauty, inspired and noble.

These works did not bring Venetsianov recognition in official circles, however. The Academy of Arts did not conceal its distaste for this artist who was drawn towards things they considered base and bound up with the common people. He longed to teach at the Academy, to be able to pass on his knowledge and experience to young artists. ‘But I am for ever denied the possibility of obtaining any kind of post at the Academy of Arts,’ he wrote bitterly. His hopes of teaching ‘thousands of hopefuls’ came to fruition only later, when at his own expense he opened an art school for peasants in the village of Safonkovo. The list of talented and original artists discovered and trained by Venetsianov included N. Krylov, Ye. Krendovsky, A. Tyranov, S. Zaryanko, G. Soroka and many others. Several of them he managed to release from serfdom. His pupils expanded and in many ways deepened the themes and images of their teacher, enriching genre painting with new content.

Venetsianov continued to work prolifically in the 1840s. Among his best works from this period were Sleeping Girl (GorkyStateArt Museum), Fortune-Telling (RUSSIAN  MUSEUM, St.Petersburg), Girl with Accordion (GorkyStateArt Museum) and Peasant Girl Embroidering (Tretyakov Gallery, Moscow). He had many more plans, but his sudden death in 1847 left them unrealised.

Venetsianov’s importance in the history of Russian art is extremely great. He was one of the first artists who dedicated themselves to the portrayal of the peasantry and who declared genre painting to be a fully fledged, important sphere of art. His canvases contained popular images, full of inspiration and human dignity.