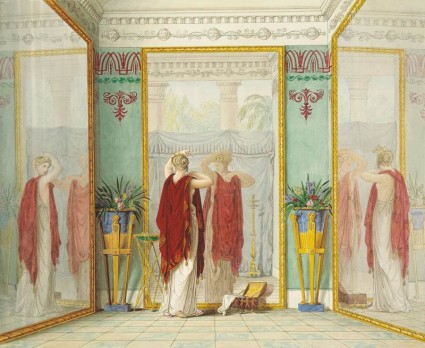 Fyodor Tolstoy, one of the most interesting and original artists of the first half of last cen­tury, was born in St. Petersburg into the family of the head of the War Commissariat, and—as was customary then—was immediately regis­tered as sergeant to the Preobrazhensky regi­ment. His parents, who envisaged their son be­coming a military man, sent him to the PolotskJesuitCollege and then to the Naval Corps. The boy’s artistic abilities were discovered very early, and while still studying at the Naval Corps he began to attend the St. Petersburg Academy of Arts. Gradually his desire to become a pro­fessional artist grew stronger, but to do that he would have to retire from the service, give up his military career and face the fury of his parents and family and a break with his relatives and friends. Only great courage and his boundless love for art allowed him to take this step. In 1804 he sent in his papers, and a life full of pri­vations and difficulties began for the young ar­tist.

At the Academy of Arts Tolstoy studied sculp­ture under professor I. P. Prokofiev and also became friendly with Orest Kiprensky, whose guidance helped him in drawing plaster-casts.

Tolstoy copied antique statues and studied ancient history with gusto, fascinated by the cus­toms and mores of the people of the distant past. His deep and sincere love for classical art, which emerged in his youth, would stay with him for the rest of his days. His remarkable talent and diligence quickly led to success. His first works were drawings and bas-reliefs on classical themes: in 1806, for example, he made the draw­ings Alexander of Macedon’s Trust in the Phy­sician Philipp, The Judgement of Paris, and The Struggle of Hercules (RUSSIAN  MUSEUM, SAINT PETERSBURG). For the wax bas- relief Alexander of Macedon’s Triumphant En­try into Babylon (1809,  StateHermitageMuseum, Saint Petersburg) Tolstoy was elected honorary member of the Academy of Arts.

Tolstoy worked in almost every sphere of art —in model designing, sculpture and graphic art, and later in painting and decorative art. His early works, haut-reliefs in rose wax — Boy Under a Shawl, Children Bathing (both 1808-09, Kalinin Picture Gallery), Psyche (1808-09,  State Hermitage Museum, Saint Petersburg) — exhibit a high level of professionalism. The figure of Psyche is distinguished by its beau­tiful lines, smooth contours and gentle, expres­sive modelling. Tolstoy’s contemporaries were impressed by his knowledge of natural forms and by his superb mastery of the secrets of wax modelling. 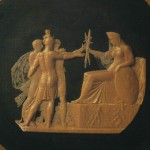 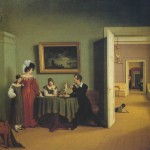 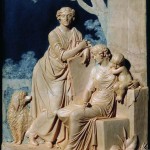 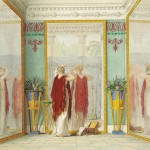 Psyche Admiring Her Reflection in a Mirror 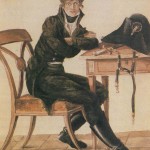 A quite unusual aspect of his early period was his wax portraits—small profile representations executed in fairly low relief in light-coloured, yellow or rose wax on a black board or glass. While in his early portrait bas-reliefs the sculp­tor sought to express the workings of his sub­ject’s minds (portrait of A. F. Dudina, portraits of Tolstoy’s brothers), in his later works he tended rather to generalise and typify the images, exercising great freedom in his choice of artistic devices (cf. portraits of K. A. Leberecht and P. A. Tolstoy).

Tolstoy’s early work as a medal-designer was done entirely under the auspices of the St. Pe­tersburg Mint, where he was appointed in 1810. A medal, in his view, ought to be clear and ac­cessible, ‘so that everyone can immediately un­derstand the occasion for its being minted’.

‘I proposed to design the medals required of me,’ wrote Tolstoy, ‘in the classical Greek man­ner, this being the best in the fine arts, strictly reflecting the customs, costumes, locality and country of the time and the persons involved in the events to be depicted on the medal. . .’

His first medal, In Memory of Chatsky’s Edu­cational Work, which conformed to the best tra­ditions of classicism, appeared in 1809, and in 1813-17 he produced many more medals, including one to be awarded to pupils at the Academy. All of them had a strict composition, beautiful contours, smooth rhythms and precise drawings. In his long, arduous years in the field of medal-designing, Tolstoy developed a doct­rine of ‘what and how to learn in order to be­come a medal-artist rather than a medal-master’.

Real fame came to the artist after he created a series of medallions on themes from the 1812 War against Napoleon. ‘I am a Russian and I am proud of that name,’ he wrote during the war. ‘Wishing to participate and share in the glory of my countrymen, I ventured upon an undertaking which would trouble even the greatest artist. But the hitherto unheard of glory of our days can inspire even a mediocre talent to enter the gates of the future. I decided to convey to posterity all the shades of emotions felt by me, and wished to tell the people of the future that in our day everyone felt as I did, and everyone was happy to bear the name of a Russian.’

It is important to point out that Tolstoy carried out this work—for more than twenty years—not at the request or orders of some highly placed personage, but motivated purely by his own genuine patriotism. He celebrated the military actions not in portraits of generals but in figures which symbolised the Russian troops and people’s volunteer army. He careful­ly studied the details of battles, read the descrip­tions by military experts and talked to war ve­terans. The drawings and sketches which have been preserved allow one to follow the creative process behind each composition and show that the laconic, expressive qualities of Tolstoy’s ar­tistic idiom were the fruit of extensive searches and painstaking labour. He achieved his goal that ‘everyone who looks at the finished medal should recognise the event being illustrated without resorting to the inscription’.

Tolstoy’s medallions are very diverse both in subject-matter and treatment. The majority of them concern the most important battles of the Patriotic War, and all are firmly rooted in real life and history, interpreted with sincerity and emotion.

The medallions became widely known not only in Russia but also abroad, and Tolstoy was elected as a member to almost all the European academies of arts. His artistic peak coincided with his most active period of political and civic activity. Like many progressive people of his time, Tolstoy longed for sweeping changes in the social order. In 1816 he joined the free-masons, and later he took part in the organisation of so-called ‘Lancaster schools’, the aim of which was to spread literacy among the popula­tion.

Tolstoy’s social activities led him in 1818 to join a secret society—the Union of Prosperity, of which he became one of the leaders. He did not wholly go along with the Decembrists, but he did not lose his convictions, his daring and his broadmindedness. This can be clearly seen from two memoranda which he submitted to Nicho­las I in 1826 in which he bravely defended the dignity of the human personality, harshly criti­cised the senseless drills and discipline of the cane in the army, and angrily condemned serf­dom and bureaucratic extravagances. He was most active in his attempts to achieve freedom for the Ukrainian poet T. G. Shevchenko.

But the artist’s involvement in public affairs did not cause him to desert his art. In 1816 he made four wax bas-reliefs illustrations for Hom­er’s Odyssey (TRETYAKOV GALLERY, MOSCOW). These works represent an invaluable part of his sculptural legacy. His fine understanding and knowledge of the antique world, his great insight into Ancient Greek life which fascinated him so, enabled him to reconstruct pages from history with lyrical charm and realism.

Apart from medallions and bas-reliefs, Tol­stoy produced several sculptures. In 1822 he modelled a Head of Morpheus (terracotta, RUSSIAN  MUSEUM, SAINT PETERSBURG), in 1839 a Bust of Nicholas I (marble, RUSSIAN  MUSEUM, SAINT PETERSBURG) and in 1848 a Head of Christ (plaster of Paris, RM; marble, TRETYAKOV GALLERY, MOSCOW). In 1849 the Council of the Academy of Arts confirmed him in the post of professor, in recognition of his services to sculp­ture.

An important place in his artistic legacy is oc­cupied by his illustrations to Ippolit Bogdano­vich’s poem Dushenka (Psyche). For thirteen years he worked on these drawings (1820-33, TRETYAKOV GALLERY, MOSCOW), which were later used to make engravings. In these drawings, the brilliant use of the line — which characterised all his work—mani­fested itself particularly clearly. The line or con­tour, was for Tolstoy the main means of artistic expression. In his hands the line is elastic and precise, sometimes stronger, sometimes weak­er, creating a full impression of depth and mate­riality in his figures and objects. The varying character of the lines allowed him to solve plas­tic and spacial problems with extreme concision. Tolstoy’s illustrations to Dushenka were his finest graphic achievement.

Fyodor Tolstoy was also renowned as a de­signer of sets for ballets and operas. In 1838 he designed the scenery and costumes and did a large number of drawings of individual dance steps for the ballet The Aeolian Harp, and in 1848 for the ballet The Echo.

Tolstoy considered sculpture, medal-design- ing and graphic art his main spheres of activity, and it was to them that he directed most of ener­gy. In his rare free hours he used to cut silhou­ettes from black paper; this he did for himself and his friends, quite independently of prevail­ing tastes and of the demands of the Academy and official commissions. The silhouettes vi­vidly reflected his realistic aspirations and interest in the surrounding world. He also painted several pictures: Family Portrait (1830, RUSSIAN  MUSEUM, SAINT PETERSBURG), Embroiderings. In the Rooms (TRETYAKOV GALLERY, MOSCOW) and View of the Markoville Summerhouse in Finland (1855, TRETYAKOV GALLERY, MOSCOW).

Fyodor Tolstoy died on 13 April 1873, at the age of ninety. His life was long and industrious, and he left a glowing legacy. Created over a hundred years ago, his works are still very much alive today.