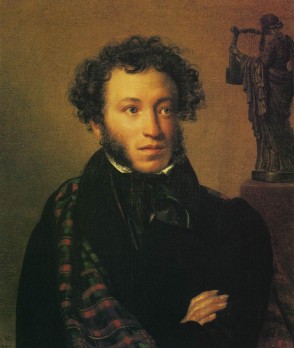 Orest Kiprensky, the great portraitist of the early nineteenth century, was born in the Ora-nienbaum district of Petersburg Gubernia, on an estate belonging to the landowner A. S. Diakonov. The future artist was entered in the register of Koporye church as the illegitimate son of the peasant girl Anna Gavrilova, who a year after the birth of her son was married to the landowner’s manservant Adam Schwalbe.

In 1788 Kiprensky was sent to the school run by the Academy of Arts and nine years later he entered the class of historical painting, which was usually reserved for pupils who displayed some ability. His teachers were the professor of historical painting G. I. Ugryumov and the master of plafond and decorative painting Gabriel-Francois de Doyen.

The artist won his first gold medal in 1805 for the historical canvas Dmitri Donskoi on Sustaining Victory over Mamai (RUSSIAN  MUSEUM, SAINT PETERSBURG). But it was not historical painting that brought him fame. 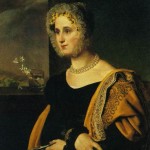 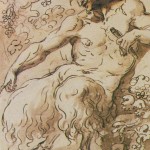 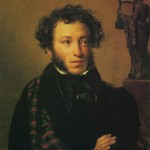 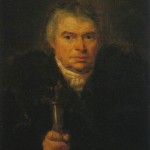 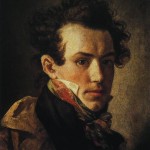 As early as 1804 Kiprensky painted one of his most talented works—a portrait of his father, Adam Schwalbe (RUSSIAN  MUSEUM, SAINT PETERSBURG). The portrait is impressive because of its remarkable maturity, its deep understanding of human nature, and the level of mastery attained at such an early stage in the artist’s career. We see a self-willed man, full of dignity and spiritual strength. The work is realised in warm colours with free, sweeping brushwork, built on contrasts of light and shade.

This brilliant portrait impressed Kiprensky’s contemporaries. In 1830 it was displayed at an art exhibition in Naples and, as the artist himself wrote, ‘the Academy here concocted the following ideas . . . some considered the portrait of my father a Rubens masterpiece, others thought it was a Van Dyck, while a certain Albertini went as far as Rembrandt!’

The artist’s early works included a Self-Por-trait (1808, RUSSIAN  MUSEUM, SAINT PETERSBURG). The easy-going, elevated character of this inspired image, and the distinctive style of painting and composition, were clear signs of a new attitude to portraiture.

Both the personality and the work of the artist were suffused with the spirit of the liberal first decades of the nineteenth century. Kiprensky was a romantic artist, the first of the portraitists to catch the tenor of the age and to poeticise the value and beauty of man’s spiritual wealth. ‘Who said that feelings deceive us?’ he wrote in an album of drawings.

The year 1808 saw the start of Kiprensky’s friendship with the well-known collector and art patron A. R. Tomilov, whose house was one of the centres of artistic life of the first quarter of the nineteenth century.

On 27 February 1809 Kiprensky left for Moscow, where he was to help Ivan Martos complete his work on the monument to Minin and Pozharsky. In Moscow the artist’s contacts widened. In Rastopchin’s salon and at Mme Mura-vyova’s house, he met the poets K. N. Batyush-kov, P. A. Vyazemsky, V. A. Zhukovsky, S. P. Marin, and also Denis and Yevgraf Davydov. He was enormously influenced by the atmosphere of such meetings and creative discussions, by Rastopchin’s private art gallery (which had something like 300 exhibits, including pictures by Velazquez, Van Dyck and Tintoretto) and by the pre-war mood of Russian society.

Abounding in impressions, Kiprensky’s life in Moscow was conducive to intensive artistic activity. ‘Kiprensky is half-crazed by his work and by his imagination,’ wrote Rastopchin to the conference secretary of the Academy of Arts, A. F. Labzin.

Among the best works of the Moscow period, 1809-1812, are portraits of A. A. Chelishchev (1810-11, TRETYAKOV GALLERY, MOSCOW), Ye. P. Rastopchina (1809, TRETYAKOV GALLERY, MOSCOW) and Ye. V. Davydov (1809, RUSSIAN  MUSEUM, SAINT PETERSBURG). In his full-dress portrait of Ye. V. Davydov, a hero of the 1812 war decorated with the gold sword for his bravery, Kiprensky strove to depict a man of a progressive turn of mind, a forerunner of new social forces in Russia. The attraction of the portrait lies in the nobility, dignity and emotional elevation of the character.

In March 1812 Kiprensky returned to St. Petersburg. For several of his portraits—including those of Ye. V. Davydov, Prince Oldenburgsky, I, A. Gagarin and A. I. Kusov—he was awarded the title of academician of portrait painting.

Kiprensky reached his peak as a portraitist at the time of the 1812 war. ‘The Patriotic War gave us our Curtiuses, Scaevolas and Regulu-ses,’ wrote a veteran of that war, P. Svinyin. As though in a rush to record the heroes of the war, Kiprensky made numerous pencil drawings. A series of graphic portraits depicted the artist’s friends: the brothers M. and A. Lanskoi, General Chaplits, the home guards A. P. Tomilov and P. A. Olenin, the poets K. N. Batyushkov, I. I. Kozlov and V. A. Zhukovsky, and the fable-writer I. A. Krylov.

He also produced a series of pencil portraits of children and young people, which are marked with joyful sense of purpose and by the general harmoniousness that typified Kiprensky’s work of that period. Such were the portraits of N. Kochubei, Petya Olenin, the peasant boys Andryusha and Moska, the Kalmyk girl Bayausta, the future Decembrists N. M. Mura-vyov and A. P. Bakunin. Kiprensky’s drawings made an invaluable contribution to the development of world graphic portraiture.

Some of Kiprensky’s best paintings also date from this time—including his masterly portrait of D. N. Khvostova (1814, TRETYAKOV GALLERY, MOSCOW).

In mid-May 1816, having received the title of Adviser to the Academy of Arts, he was given state support to travel to Italy thanks to the endeavours of his friends, especially the writer Zhukovsky.

During his years in Italy (1816-1823) the artist continued to work intensively. However, his mood and to some extent his works of this period were affected by the hostile atti­tude towards him of the civil servants in the Russian embassy in Rome, who kept an eye on their pensioners, and by the upheavals of the revolution in Italy. Among his best works of these years were his portrait of A. M. Golitsyn (c. 1819, TRETYAKOV GALLERY, MOSCOW), his pencil portrait of S. S. Shcherbatova (1819, TRETYAKOV GALLERY, MOSCOW) and his famous Self-Portrait of 1819 , which was commissioned by the FlorenceAcademy for the Uffici Gallery.

This Self-Portrait brings out new traits of the painter’s work. Here, nothing remains of the sparkling immediacy and thirst for life that were the keynote of his earlier self-portrait. The world around him had lost its joyful attraction and was daubed in sombre hues. Kiprensky was acutely aware of the dichotomy between ideals and reality.

In July 1823 Kiprensky returned to his homeland, which was going through a period of cruel reaction under the auspices of the chairman of the Military Department Arakcheyev. Arak-cheyev and the Minister Guriev were made honorary members of the Academy of Arts. ‘The Academy,’ wrote Kiprensky on his return to St. Petersburg, ‘has grown mouldy.’

The suppression of the Decembrist Uprising in 1825 threw Kiprensky into a state of grief and disillusion. There is no information available on the artist’s attitude to the Decembrists’ secret society, but he did meet many of them at the house of the officer of household cavalry D. N. Sheremetiev, and was on friendly terms with some of them. He was most certainly deeply moved by their fate, as was a considerable part of Russian society.

Despite his cold official welcome in Russia and serious inner crisis, Kiprensky’s mastery in no way flagged. His portrait of the poet Alexander Pushkin (1827, TRETYAKOV GALLERY, MOSCOW) was his greatest achievement in the field of portraiture. It was painted at the request of Delvig, a poet and friend of Pushkin, between May and July 1827, while the latter was on a short stay in St. Petersburg. Pushkin liked the portrait and acquired it after Delvig’s death. He dedicated the following lines to Kiprensky:

Though neither French nor English born—

You re-created me, magician,

The crystal muses’ chosen one.

There was a general feeling of indignation at the fact that Kiprensky, who had made such impressively realistic drawings and paintings of participants in the 1812 War, was not asked to paint portraits for the official 1812 War Gallery. Alexander I passed over other Russian artists too, and gave the commission to the English artist George Dawe.

‘I went to Italy,’ wrote Kiprensky, ‘with the sole purpose of bringing to Russia the fruits of a more mature talent, but instead, on my return I was covered in the envy of my adversaries. Ignoring this envy, I always strode firmly onwards, knowing that sooner or later time always reveals the truth.’

At the end of the twenties he again left for Italy. His marriage to his former pupil and inspiration Maria Falcucci failed to brighten up the last years of his life.

Orest Kiprensky died on 5 October 1836 and was buried in Rome.

‘The celebrated Kiprensky has died,’ wrote the artist A. A. Ivanov from Italy. ‘He was the first to bring fame to a Russian name in Europe . . . Kiprensky was never decorated and never granted favours by the Court—and all for the simple reason that he was too noble and proud to seek such things.’