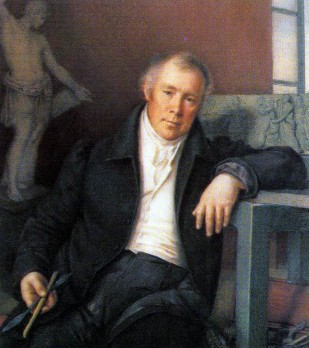 Vasily Demut-Malinovsky occupies one of the leading places among the masters of Russian monumental sculpture of the first half of 19th century. His works echoed the heroic epoch of the 1812 War and were close to the thoughts and feelings of the Russian people. He was born the son of a wood-carver, in St. Petersburg. His first contact with art came in his early childhood, when he used to watch his father at work, and in 1785 he was sent, a six-year-old boy, to the Academy of Arts.

In 1799, for the bas-relief An Angel Leads the Apostle Peter out of the Dungeon, Demut-Malinovsky was awarded a second-class gold medal, and the following year he won a first-class gold medal for bas-reliefs which he and some other artists made for Rastrelli’s monument to Peter the Great. That year he also graduated from the Academy. Two years later his work was judged best in a competition to design a memorial tombstone for M. I. Kozlovsky. Its musical lines, classically severe silhouette and rhythmic expressiveness were what distinguished this bas-relief allegorical composition, which was executed with genuine grace and delicate lyricism. The sculptor managed to find expressive artistic means to convey his powerful emotions and sorrow over his dead teacher.

“This monument,” wrote one student on the sculptor’s work, “contains everything that was developing in Demut-Malinovsky’s talent —simplicity and seriousness of thought, and a feeling for and understanding of the beauty of the human body, that cornerstone of classical art.”

In 1803 Demut-Malinovsky was sent with a group of graduates from the Academy to continue his studies in Italy. Here he combined concentrated individual work with a study of western-European art and the architecture of ancient Rome. A host of drawings from nature, copies from the classics and compositions on mythological themes appeared in his albums. In Rome he began work on a bas-relief Hercules and Omphal. He also devoted much time and energy to the art of working marble—an art which he mastered to perfection by the end of his stay in Italy. 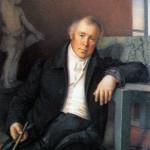 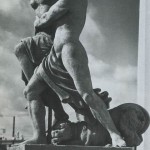 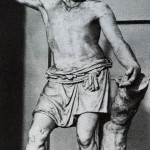 Demut-Malinovsky returned to Russia in 1806. Everything he had created abroad perished enroute and he now had the prospect of producing new works. His study for a statue of The Prophet Elijah earned him the title of academician. The sculptor’s main work on his return to St. Petersburg consisted in designing decorations for the Kazan Cathedral and the Mining Institute which were both under construction. For the Cathedral he made a statue of the disciple Andrew and for the Mining Institute a sculptural group entitled Pluto’s Abduction of Proserpina, based on ancient mythology. Pluto is carrying the resisting Proserpina away to the underworld. With her left hand she tries to fend off her abductor, while with her right she touches her head in despair. At their feet lies a three-headed dog, the legendary guardian of Hades. The group is alive with vigour and movement, but at the same time it is majestic and monumental. The statue’s powerful forms and rather heavy proportions are determined by its intended position and function. Along with Pimenov’s group, it was erected in front of the massive portico of the Mining Institute and harmonises, both in scale and proportions, excel­lently with the building. Demut-Malinovsky’s bas-relief friezes are also in keeping with the architecture and do not mar the overall smoothness of the wall. The design of the Mining Institute was a good example of the synthesis of architecture and monumental sculpture which was so typical in Russian town planning of the early nineteenth century.

In cooperation with Voronikhin, Demut-Malinovsky helped decorate one of the most beautiful interiors of the palace at Pavlovsk—the “lantern room” with its caryatids (1808). In 1812-1814 he worked with Pimenov on the sculptural decorations for the Admiralty, which was put up at that time.

The most stunning product of the patriotic wave that swept the country in the Patriotic War was the statue A Russian Scaevola (1813, RUSSIAN  MUSEUM, St.Petersburg). The idea for this work was suggested by an actual fact: a Russian peasant who escaped from captivity preferred to chop off his hand than remain branded—a mark of slavery. This event reminded contemporaries of the feat of the legendary Roman youth Mucius, who in the year 507 B.C., in front of the emperor Porsenna, who had besieged Rome, put his hand in the altar flame as proof of his pledge to kill the enemies of his native land. Shaken by the boy’s courage, the emperor freed him and lifted the siege of the city. The youth, who had sacrificed his right hand, became known as Scaevola, or ‘left-hander’. In his statue Demut-Malinovsky depicts the Russian peasant just when he has raised the axe. The twist of his torso, the energetic swing of his arm and the severe expression on his wilful face all add up to an image of tremendous inner determination, courage and nobility. Following the traditions of the time, the artist presents the figure almost naked, draped in near-classical style.

In his treatment of the image, however, he sought to emphasise national Russian features: notice, for example, the broad-shouldered, stocky figure of the peasant—a far cry from classical models—and the hero’s open face, framed by a short beard and curly locks of hair. Never before in Russian monumental sculpture had such an imposing image been created of an ordinary man from the people. For this work Demut-Malinovsky was made professor in 1813.

One of the master’s early works in the field of tomb sculpture was his monument for the grave of Ye. I. Baryshnikova (Museum of Architecture at the Russian Academy of Building and Architecture). In 1814 he executed a memorial tombstone for A. N. Voronikhin (‘Necropolis of XVIII Century’, St.Peterburg Museum of Town Sculpture). But Demut-Malinovsky’s most fruitful work was done in the sphere of monumental decorative sculpture. Here he worked in close collaboration with Stepan Pimenov, starting in 1820-1821. Their first important joint venture was concerned with the decoration of the YelaginskyPalace in St. Petersburg, where Demut-Malinovsky designed the sculptures for the Oval Hall and the Dining Room.

Demut-Malinovsky’s contribution to the MikhailovskyPalace included a frieze between the columns of the portico, which comprised forty-four individual reliefs, and a large sculptural group on the attic of the building facing the MikhailovskyGardens. In the interior of the palace he was responsible for the grand, elegant main staircase.

It was with great enthusiasm that Demut-Malinovsky and Pimenov set about the creation of sculptures for the arch of the General Staff building. The design was a joint effort and it is sometimes hard to decide exactly which artist the individual details of the composition belong to. From the reports of the Academy of Arts, however, it is known that Demut-Malinovsky sculptured the chariot in the Victory group on the arch and also the figures of a young warrior and two horses.

Later the sculptor helped decorate the building of the Public Library: his creations included a statue of Minerva over the pediment, figures of Demosthenes, Hippocrates and Euclid and a sculptured frieze. For the Alexandrinsky Theatre he produced statues of Terpsichore and Erato, which have unfortunately not been preserved. Later, he and Pimenov again collaborated on the design of the Narva Triumphal Gates, built by the architect Stasov to mark the victory of Russian arms in the 1812-1814 Patriotic War. Demut-Malinovsky’s share included the chariot in the Glory group, figures of warriors and two horses. The sculpture of the Narva Gates is marked by restraint and simplicity and is devoid of allegorical imagery which was so characteristic in monumental decorative works of the period.

The long-standing partnership between these two outstanding sculptors was brought to a close by Pimenov’s death in 1833.

In his last years Demut-Malinovsky expended much care and energy in moulding stucco decorations for the interiors of the WinterPalace and for the building which housed the Academy of Arts. In 1833 he was awarded the title of honorary professor, and in 1836, after the death of Ivan Martos, he became rector of the department of sculpture at the Academy of Arts.

After Martos Demut-Malinovsky was the best known and most popular sculptor of the first half of the nineteenth century, and he received many commissions. His works in the field of monumental sculpture are very interesting. His monument to Catherine II in the village of Troitsky-Kainardji (1833-1834) was conceived as a hymn to Russian arms, which had triumphed over Turky. His last major work was a monument to the Russian national hero Ivan Susanin in Kostroma (1838-1846).

The sculptor died on 16 July 1846, but his name lives on in the beauty and grandeur of the architectural ensembles of St. Petersburg.